It’s Time for Your Close-up 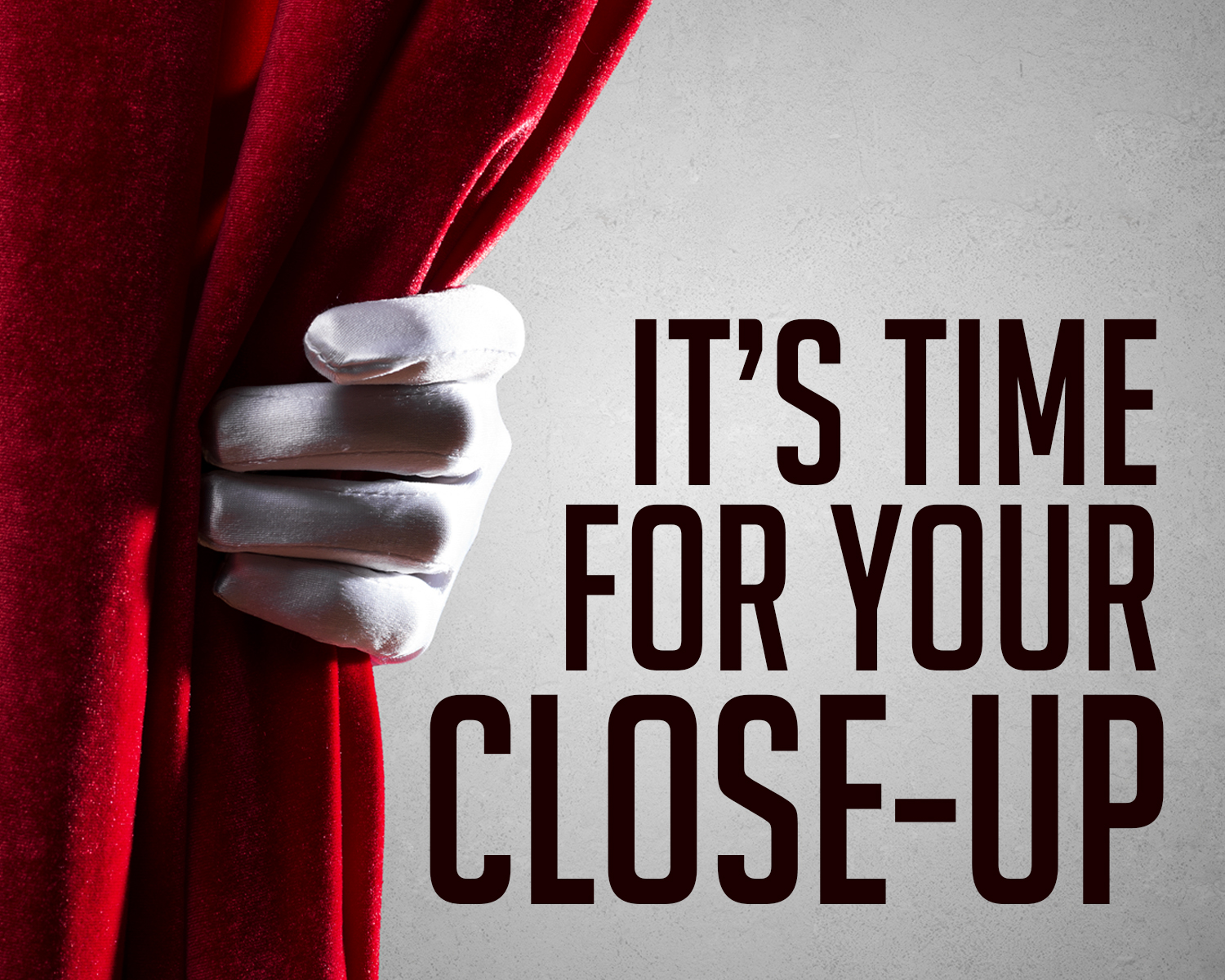 QUESTION: What got you into arranging and show choir arranging?

In the summers during my college years, I was a member of the Decatur Park Singers in Decatur, Illinois. Dave Alderman and Steve McClarey were arrangers, and I learned a great deal from them. Also during those years, I was accompanying Craig Tornquist as he hosted large show choir competitions. I collected the programs and sent letters to schools to get arranging work. I wrote my first chart in 1987, and it has grown ever since.

QUESTION: What sets your arrangements apart from others?

I constantly work to improve the quality of work by writing comprehensive arrangements. After adjudicating for almost thirty years, I have learned to apply the advice I give to groups to my own work. Keeping vocals in a singable range and writing out all drum, percussion, and guitar parts is key. I also write very limited horn and percussion parts that play over vocals, which gives the singers the opportunity of being heard.

QUESTION: When a group chooses you, what can they expect from Music Arrangement Services?

An arrangement that works for their group; communication is the key to that. With plenty of details from the director, my job is to create exactly what they need. I understand that there may be some tweaks or additional ideas for the piece. On a new arrangement, the first edit is free of charge.

They may also expect communication from me regarding pricing and licensing. A price quote is sent for financial clarity. I will help as much as possible to help with licensing. I do my best to set realistic goals in delivery, as well. They can also expect courtesy and professionality.

QUESTION: If our reader was sitting in front of you, what question should they ask you that they might think of?

“What happens if I can’t get licensing on the song that is considered the lynchpin of my show?” Consider having me write an original in the same feel and theme.

It’s Time for Your Close-up: Anita Cracauer Calling All Songwriters

Do you have any budding young songwriters in your choir who would love the opportunity to explore the craft in a class with show choir kids across the country? Please share this information and spread the word:  ShowChoirStock.com is starting an annual Songwriting Workshop this January, and we’d love for your students to join us in the very first class.

We envision a weekly meeting for young songwriters to get together and learn techniques and tools to improve their craft; a space that’s safe and welcoming for students to share their ideas with each other for encouragement and helpful feedback; a forum where older, more experienced songwriters can share their ideas and wisdom. Overall—we anticipate that this will be a fun and rewarding experience for all who participate. The leaders and guest songwriters will primarily be female, and we strongly encourage young women to participate, but the workshop will be open to all students of any gender.

The workshop will be led by Anita Cracauer, president of ShowChoirStock.com. She started arranging music full time in 2002, and her publishing career took off when she began licensing and selling her arrangements starting in 2005. As a songwriter, she wrote her first pop song when she was twelve, and over the next twenty years continued writing original songs for the bands she performed in. But her career as a songwriter didn’t really take off until she woke up one morning with a fully finished show choir chorus in her head—and it was then that she realized that her passion was not arranging other people’s songs but writing her own songs for show choirs. Over the last five years, she’s written close to one hundred songs for show choir, and she feels like she’s just getting started. Anita is inviting many other songwriters to feature as guest participants as well.

Participants will be able to join the workshop online in their own homes, meeting on a weekly basis for twelve weeks, starting in January 2022.

The workshop has no prerequisites. Some people might assume participants might need to play an instrument in order to write a song.  In reality, thousands of successful songwriters don’t play instruments. All that songwriters need is an ability to write lyrics and a musical ear to help create and sing a melody. When it comes down to it, that’s all a song is—words sung to a particular set of pitches. When your song is complete—if you don’t play an instrument—Anita will create an accompaniment track for you so you will have a finished product to share if desired.

At the end of the course, you’ll receive a certificate of completion, and you’ll have a finished song. If your song has “show choir appeal,” it will be considered for publication on ShowChoirStock.com, where choirs around the world will able to purchase and perform it. Let’s find, nurture, and support the next generation of songwriting talent directly within our own community.

ABOUT THE AUTHOR: Anita Cracauer is the founder of ShowChoirStock.com, an online catalog of show choir arrangements. She has worked as a freelance arranger, songwriter, and publisher in the show choir industry since 2001. In addition to writing and publishing, she judges competitions across the country and educates others on the topics of arranging, songwriting, and copyright licensing and publishing.

It’s Time for Your Close-up: Garrett Breeze with Breezetunes.com

QUESTION: What got you into arranging  and show choir arranging?

Truthfully, the thing that got me into arranging was the fact that middle school trombone parts are incredibly boring. And so, my early experiences arranging were really centered around my instrument and trying to figure out how to play all the things I wanted to play—which eventually worked itself into a desire to start composing original music. My teachers saw this and encouraged me to continue in some pretty remarkable ways. I had my first “premiere” in the 8th grade when my orchestra teacher, Carol Dennis, put my (terrible) first composition on the spring program. And all through high school, my band teachers were letting me put things in front of their ensembles to sight read and record and perform.

My first experience with show choir came my sophomore year at North Central in Indianapolis. I was conscripted to join the Counterpoints band, and I literally had no idea what I was in for. And to be honest, I had fun playing the music, but I still came at the activity with this attitude of pop music being inferior to instrumental composition and jazz. However, I was just blown away by the amazing musical moments the choir was able to make out of all this “boring” pop music. And it was all because of their arrangers, Mike and Pamela Runyan, who came in every week to work with the band and became really important mentors to me.

I loved arranging, but I always viewed it as a steppingstone to composition because I assumed that there just wasn’t enough work out there. But I always seemed to find myself gravitating towards vocal music. Even though my goal in college was to become a film composer, I was still arranging for Pat Wiehe’s prep group at North Central. I got a campus job arranging for the BYU Young Ambassadors, and I was playing trombone for Mack Wilberg and the Tabernacle Choir in Salt Lake City, for whom I would eventually start writing orchestrations. Those opportunities started snowballing into more work to the point that when I finished graduate school at Belmont in Nashville, I realized that I was busy enough to keep at it full time.

QUESTION: What sets your arrangements apart from others?

What I try to do is approach show choir arranging from a cinematic standpoint. A good film score is all about subconsciously telegraphing to the audience how they should feel, through the shape of the line, the choice of orchestration, and so on. It’s not a perfect analogy, but when you’re arranging for show choir, the music has to support the visual and dramatic elements of the show. And whether or not it has a story, the show still has an arc—you’re still taking the audience on a journey. With vocal music, the song lyrics do a lot of the emotional heavy lifting, but I still try to make sure that the accompaniment can stand on its own and tell the same story.

QUESTION: When a group chooses you what  can they expect from Breeze Tunes?

For some people, an arranger is just another online shop where they can go and buy music—and if that’s all you want from me that’s okay—I’ll still take your money. But I get the most fulfillment out of being involved with my schools as a part of the creative team because it doesn’t really matter how good an arrangement is if it doesn’t fit the show.

QUESTION: If our reader was sitting in front of you, what question should they ask you that they might not think of?

I would assume most of your readers are involved in music education, so I would want them to ask me about how they can incorporate commercial music into their curriculum. My whole career exists on this very unusual intersection between music education and the music industry, and it’s made me realize just how much of a disconnect there is between how music exists in academia versus how it operates in the real world. Even if your focus is on classical repertoire and traditional choral music, I still believe that incorporating songwriting, arranging, technology, the music industry, and contemporary music history is only going to help your students. If that’s something you’re interested in doing, please don’t hesitate to reach out.

ABOUT THE AUTHOR: With more than 1,000 show choir arrangements in circulation, Garrett Breeze is a sought-after clinician and adjudicator whose credits include film and television, Broadway stars, and Grammy-winning classical artists. His show choir music is available at breezetunes.com and he recently launched a new catalog of music for concert and church choirs at holidaychoirmusic.com.

You Light Up My Stage