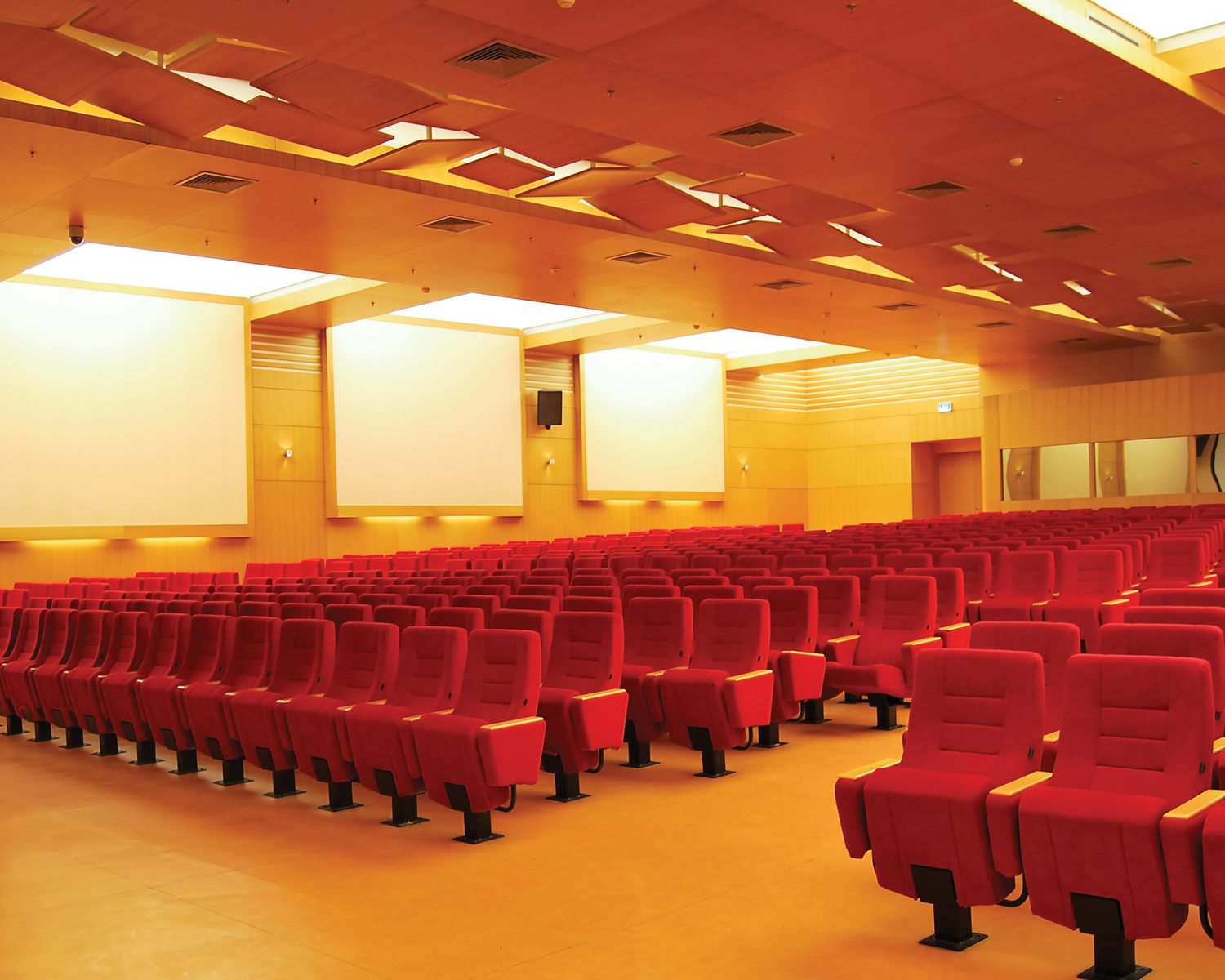 Share
Share this:
Digital
PDF
Issue
Schools have a multitude of different rooms where acoustics matter. In addition to the obvious intelligibility requirements for classrooms, there are choir and band rooms, recording and broadcast facilities, gymnasiums that may need to double as performance areas and-if the performers are lucky-a dedicated theater for the performing arts.

When Sound Absorption Doesn’t Add Up

If a performance space is too reverberant (echo, “slap back” or long “ring-out”), the obvious answer is to add sound absorbing materials. However, the end results may not be the total of what existed plus what is added. This is true if the walls had some absorption initially and the added materials cover that area.

If the walls are hard and bare, with zero absorption, the result will be the full value of the added material. Hard and bare may seem obvious but-in some cases-looks are deceiving. For instance, a single sheet of drywall mounted on a rigid hard surface will generally be very reflective. If a single sheet of drywall were added to close an opening in the original construction, it will have its own absorption characteristics and, in fact, be a reasonable bass trap. This is still true, but to a lesser extent, even when mounted on studs in standard 16-inch on center spacing.

In short, what you see isn’t always what you get in acoustics. Applying hand pressure to a wall will determine if it is rigid or flexing. If one sidewall flexes and the other does not, there may be problems in studios where left and right response having equal characteristics is necessary to making sound judgments.

For a large space that is used for different purposes-such as sports games one week and theatrical performances the next-the most efficient means of reducing the room reverberation is usually hanging baffles. Since these items hang, they are not taking away from the sound absorption characteristics of the existing wall and ceiling treatments.

Additionally, they add more surface area, hanging in free space. Basic arithmetic suggests that a 2′ X 4′ suspended panel has a surface area of 8 square feet. On second thought, with both sides exposed, the total surface area doubles to sixteen square feet. Correct? Actually, no. The edges also add to the sound reduction. For a 2-inch thick baffle of the above dimensions, the edge perimeter adds two more square feet. This explains why performance of these devices is usually expressed in sabins of absorption rather than as an absorption coefficient.

A two-inch thick fiberglass baffle of these dimensions measures approximately 17.9 sabins of absorption. With a coefficient of absorption defined as sabins per square foot and limited to 1.00 as full absorption, the only way to reconcile this conflict is to use the total surface area of 18 square feet to yield a coefficient of 0.99 or to use a formula based on the absolute absorption number in sabins per unit.

Diffusion Isn’t Always What It Seems

In the scientific community, the easy way to start an argument (or continue one) is to refer to all the various reflective devices as diffusers. For that matter, there is disagreement as to whether it is a diffuser or a diffusor. (You say potato, I say potahto.) For our purpose, we will use the term diffuser to include sound reflectors, scattering devices and just about anything that redirects most of the sound hitting its surface.

We will start will the polycylindrical (barrel shaped) diffuser as used on the early Hollywood sound stages and spelled with an “e”. These devices not only spread sound rather evenly above 500 Hz, but they also absorb very little above that point, typically measuring a sound absorption coefficient of SAC =0.10. Below 500 Hz is another matter. These devices absorb up to SAC = 1.00 in the range below 500 Hz where the center of their bell curve is determined by the dimensions of the poly.

A 4′ X 10′ unit is most efficient around 40 Hz. These characteristics make the units an excellent complement to typical wall panels that lose usefulness below 250 Hz. In other words, their sound absorption characteristics allow them to cover for the acoustical wall panels in the lower ranges and eliminate residual “room boom” in an environment where the panels have already achieved speech clarity. The effect is to make the room feel smaller than the cavern as it began.

When turning to the acoustics of smaller engineering and artistic spaces such as the broadcast and recording studio, the needs reverse and the mission is to make the space appear larger acoustically. Absorption will be placed to prevent unwanted reflections from arriving at the listener before the primary source is heard, unaltered. It is not as simple as calculating a room reverberation time for a large hall. Once this is achieved, it is desirable to have sound scattered so that the back wall location is not obvious, but the ambiance and the life of the sound within the room remains.

This is usually achieved with mathematics based “Schroeder” diffusors such as those commonly known as “Quadratics.” (The observant reader will note that the spelling of diffuser has morphed to the use of -or, diffusor which is most common for designs of this type.) With these units, not only does the sound reflect back at different time intervals due to well depth or element height, the reflections interfere with one another causing the sound to bloom. An analogy can be made to a brown butterfly wing appearing multi-colored as the light reflects from an uneven wing surface.

The more traditional “polys” can also be of use in these spaces but here more for their bass absorption “trapping” capabilities. The term trapping is counterintuitive. Although it implies destruction of sound, it is really preventing it by absorbing the bass like an open window rather than allowing it to reflect back on itself out-of-phase and cancelling.

While not all areas of a school have the same requirement, all areas require acoustics to be addressed to perform properly. Thinking of acoustics first will save in the long run in both total cost and proper performance.

About the Author
C. Nicholas Colleran, Jr. CPA is a former recording artist and recording engineer. He wrote a business plan for his sound company while with a CPA firm. He is now a principal of Acoustics First Corporation working to control sound and eliminate noise.
Read more from this author
Share
Share this:
Digital
PDF
Issue
More in Audio & Sound