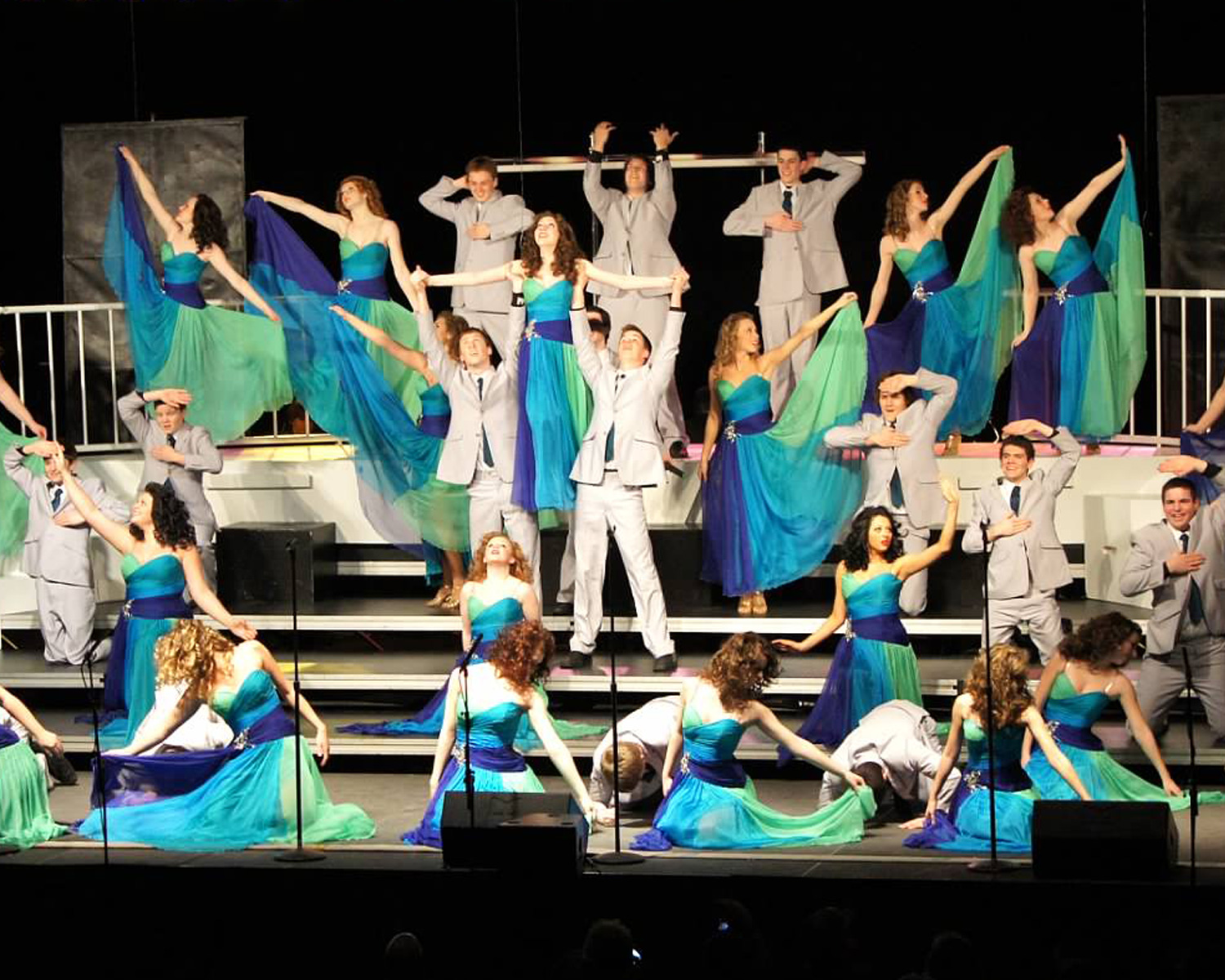 Share
Share this:
Digital
PDF
Issue
As an integral part of a school that represents values of humility and grace, Terry Voss consistently focuses on the families touched by the music program. Reluctant to glorify personal achievements, Voss repeatedly redirects praise to members of his faculty, the students he works with, and the families that support Totino-Grace in Fridley, Minnesota.

Mary Smisek has four children, and all have gone through the Totino-Grace Vocal Music program. Her oldest, Maria, was the trailblazer; Maria graduated in 2005 and was followed by John who graduated in 2008. Currently, Mary’s youngest two are involved in the program—her son, Michael, is in Company of Singers and he also plays in the band for the Junior Varsity Show Choir—Encore Singers; his younger sister, Anne, is part of that ensemble. Not surprisingly, as the mother of such a talented group of kids, Mary is also musically inclined. She plays locally for musical theatres, and she is the Music Director at her church. Though her husband is a full-time dentist, he also finds time to sing in the church choir. Their son, Michael, adds that even his grandparents on his father’s side played in jazz bands, and his father plays the organ.

When Mary first encountered Show Choir with her daughter, Maria, she said it was a “whole different way of thinking” when she committed to being an active part of all of her children’s extracurricular activities. Challenges aside, Mary notes how proud she has been to see the “side benefits” that developed for her children because of their role in Show Choir. She mentioned that some of Maria’s bridesmaids in her recent wedding were Show Choir members from Maria’s time in Company of Singers. She notes that there is something “distinct” and “special” about friendships formed in Show Choir, perhaps because they spend so much time together: practicing, travelling, and competing.

She believes the Vocal Music Program at Totino-Grace is a “real camaraderie builder” and even a “support group.” Mary adds that there is a different dimension to Show Choir relationships and that there are “different things in operation.” She even comments on the extra closeness in her own children’s relationships, as they love watching their Show Choir videos, using the viewings as both a tool for improvement and for entertainment. Her son Michael adds that it’s interesting to live in a family with musicians, and even have a music teacher in the house, because he can always be learning and growing in that field.

Mary Smisek calls Voss “such a gift.” Having a background in Music Education and experience in the classroom as well, she knows the talent and persistence required to handle such a large and varied music program. She adds of Voss, “We are blessed to have a chance to study with him.” She notes how impressive the quality of the program is, which she believes is part of the reason so many students leave as music majors. Even Michael is considering either a major or minor in Music, which jockeys for position with his other passion: Psychology. In fact, the connections between the two are what he loves most about Music, he says, with music offering just another way of expressing emotions and moods.

Tammy Rehbein, the Parent Liaison for Company of Singers, is also very involved with the Music Program along with her daughter Brooke, a high school senior and four-year member of Company

of Singers. Brooke has been in the Music program since she was a first-year student, when she started as a crew member. Though she most wanted to be a performer, she’s now glad she had that experience because she has seen “all of work that goes on behind the scenes” and she’s more aware of all the work crew members do to make the show successful. Because she is planning for college now, she comments on how helpful that work ethic was over the last few years because it made her “get things done to a higher standard.”

Brooke has three older brothers, and—though the musical talent was there waiting to be tapped—all of them went another way. Tammy guesses that the stigma of the “manly guy” wouldn’t necessarily hold up to the “softer side of singing and dancing.” Because her boys were involved in sports or other activities, Tammy says she didn’t know “what an incredible music program Voss runs” until Brooke was old enough to develop those interests.

Sue Kroehler has been a Show Choir parent for four years; her daughter Allie was in the Junior Varsity Show Choir—Encore—for two years and Company of Singers for two years. As the mother of Allie and two other children, Sue has found that balancing all the activities in her household can be “quite the challenge.” Because Allie has adored everything about her experience in Show Choir, she has been pushing her little sister—Madie (freshman)—and little brother—Jack (7th grade)—into that realm.

Laughing, Sue notes that Jack is happy to sing and dance in front of his friends, but moving that to another audience might be daunting. He’s more “sports oriented right now,” Sue adds. But, she’s also hoping her younger children follow Allie’s footsteps into Show Choir because she has seen firsthand the bond that forms between these students and knows “they’ve gone places they would never have gone.” About encouraging her siblings to follow her musical path, Allie adds, “My experience has been so positive—I just want them to have that.”

Sue also praises Encore as a “no-cut event” which builds confidence along with the necessary skill sets to excel in the competitive Show Choir world. Just as with the Smiseks and Rehbins, Show Choir is a family affair for the Kroehlers as well. Recently, prior to their “Company of Singers Spectacular,” the entire family was there working on a Wall of Fame. Madie and Jack were there, with countless other family members of kids at all levels in the program, papering photos of every kid in the Vocal Music Program on that wall.

Mary Smisek notes how the faculty members of the Totino-Grace Music department have created a university setting because of the cooperative nature of the faculty interactions and the supportive atmosphere. Because she has taught before, Mary has approached the staff—asking questions from a teacher’s point of view. The staff members in the Music department were universally supportive in making her feel included in those conversations, which is certainly not the case in some high schools.

Voss and the band director Mr. Hoffman have even offered a “trade” day where Band students can go to Choir and vice versa—so these musically inclined kids aren’t hemmed in to one musical offering because of a scheduling limitation. Sue and Allie also agree that the “trade day” between the Music and Band classes that Hoffman and Voss have worked out is exceptional, offering flexibility in a situation where generally there is none. Allie notes that several students make that switch; in addition to the new energy and fun offered by the change, Allie also says that they “work a lot harder because they’re only there for a day.”

Tammy Rehbin also comments on the “musical community” that has been created at Totino-Grace and adds that students and parents even call it the “MUSIC WING.” She praises the exceptional efforts at “crossover” that the faculty members work toward. In this musical community, she explains, it is “all connected” and you “find a way to make it work if you want it to work.”

Tammy also explains that Voss is exceptional at delegating the efforts of others and “letting people share their talents.” If there is a gap, Voss is also quick to hire the perfect choices to help them reach their goals. Suzanne Rayborn is one of those praised. Though she’s not directly involved with Show Choir, she is a voice teacher and accompanist at Totino-Grace. She also works in the professional theatre realm as a performer and music director, runs a voice studio, and teaches at a performing arts studio in Fridley.

Rayborn explains of voice lessons, “We really feel than much of the true teaching of good technique, as well as educating the students in the ‘language’ of music, happens during these times. It also allows us time with the students in a more individual way, which is very difficult with classes and ensembles of more than 50 students at a time.”

Adding how thankful she has been that the administration supports the program, she concedes that the biggest challenge is—not surprisingly—scheduling. Because of their graduation requirements and course sequencing, students have a hard time adding Choir to their schedules, and all three Show Choir and two Chamber choirs do their best to schedule classes around “nearly all other activities.” They even choose times to rehearse that no one else wants.

A Safe Place and a Successful Season

Speaking of Voss, Rayborn says, “He is a great person to have at the helm of the vocal music department. He is always looking to find opportunities for the students in all musical areas. We have had a variety of clinicians and guest artists work with the choirs.”

She includes that Voss has brought in guest directors and a host of people to work with the Show Choir who excel in vocal performance and dance; he’s brought in “solo teaching artists in classical, musical theatre, opera, and pop styles for students wishing to workshop songs.”Rayborn concludes with the idea that Voss has a special way of connecting with the students. “One of his mottos that the students have learned, and we hope they will carry with them as they move beyond Totino-Grace, is to ‘kill ‘em with kindness’. He has fostered a community of mutual respect and quality musical experiences.”

Voss notes that the students in the Show Choir program are focused on hard work and community. He believes part of what makes Totino-Grace special is that they all want to do well, and they all want to be there. He also explains, however, that this is not a “neighborhood school,” so to speak. Because they haven’t necessarily grown up in the same neighborhoods or attended the same churches, students do face the fears of walking into an environment where they may not know many people. His mission is to give those kids who might feel uncertain or apprehensive a place to be accepted and appreciated.

Voss believes a successful season is one where the experience has been positive and everyone has gotten along. Success follows, for Voss, from a season that was “supportive, inclusive, and safe.” Safety is more than physical safety. He wants those students to feel emotionally safe. “It’s never okay to make someone feel uncomfortable or un-liked,” he tells his Show Choir members. It’s about “holding each other up,” Voss notes, “with no regrets.” Rayborn echoes that sentiment, adding that they are “respectful and supportive of the students as individuals.” She says, “The kids definitely feel comfortable with each other and with us. They tend to hang out in the music area during lunches, after school waiting between rehearsals, etc. I don’t think this in necessarily unique to TG, but we are certainly pleased to offer a ‘home’ away from home, a comfortable place where the students can be themselves.”

That’s exactly what Voss works toward every year. He wants “every type of kid there is” to feel welcomed, recognized, and appreciated. “They can be as goofy as they want here,” he adds. “They can be artsy—they can be whomever they want to be…and be supported.”