A Formula for Success: Focus on Great Singing and Dancing 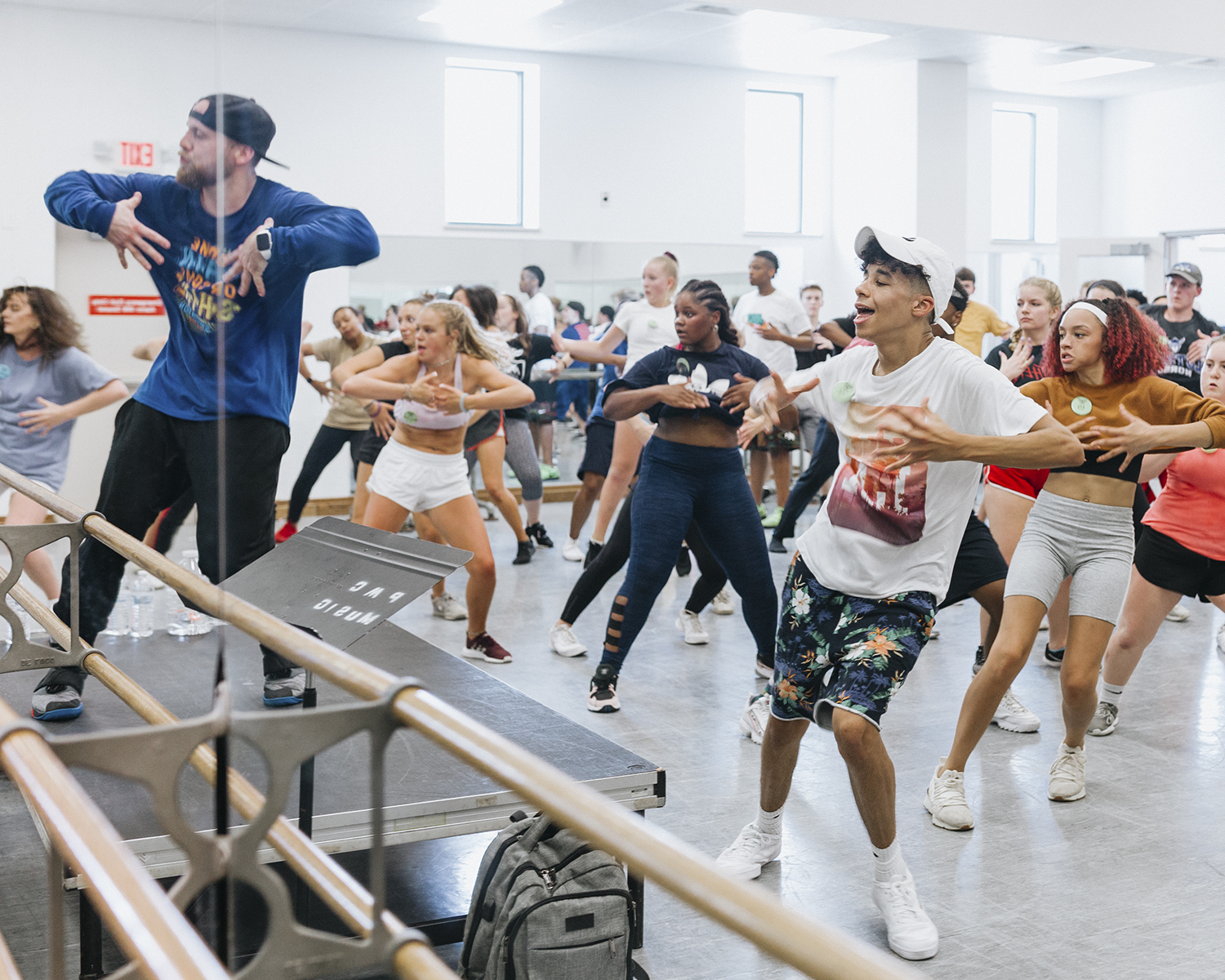 Share
Share this:
Digital
PDF
Issue
In 1980 as freshly degreed music educators, Dwight Jordan and Susan Moninger wondered what they could do with their passion and commitment to music education and entertainment. They pondered ways to elevate and broaden the scope of show choir. They asked each other, “What would it be like to be coached by the finest instructors in the country, to study with award-winning choreographers and choral directors with both educational and professional experience, and be exposed to vocal coaches who have worked not only in renowned choral programs but also with Broadway performers? What would it be like to have Broadway stars share their experience and expertise?”

This kind of experience would be amazing, of course! In the summer of 1980, they hosted their first camp specifically for middle and high school show choirs at Millikin University in Decatur, Illinois. More than forty years later, Showchoir Camps of America (SCA), led by Mr. Jordan and Ms. Moninger, continues to host annual camps for teachers and for students ages twelve to eighteen.

For a summer camp to continue flourishing for forty-two years is remarkable! The directors brought something of great value to the show choir community, as evidenced by the success of the camps. In this interview, Mr. Jordan shares some insights on how the camps have evolved over the years and why SCA has been so successful.

What was that first camp like in the summer of 1980?

“We had two hundred students and sixty directors at the first camp. Vocal director clinicians included Kirby Shaw, Roger Emerson, and Mac Huff. Our first guest star was Harry Chapin, who brought all the kids onstage as he sat on a stool, played his guitar, told stories, and sang all of his hits.”

Wow! Those are some big names in the choral music industry. And Harry Chapin (rest his soul) was nominated for two Grammy Awards and was inducted into the Grammy Hall of Fame. What was the content and format of that first year, and have you changed your focus over time?

“There have  certainly been changes through the years, but we have kept the same basic format. The student camp has always been centered around preparing for a show choir show to be performed at the end of the week, workshops on all aspects of performing, and evening performances by Broadway performers and a capella groups, along with student and staff/teacher talent showcases. The teacher camp is much more than just show-choir related. It includes teaching techniques, reading sessions, motivational and well-being workshops, as well as the option to perform in the teachers’ show choir.”

Have you always hosted a teachers’ camp? If not, when and why did you add that program?

“We have had the teachers’ camp from the beginning and continue to offer a wide variety of musical and educational experiences. The first year, the teachers did not present a show themselves. The second year, they started learning choreography to published songs. At that time, the majority of the directors had not been in show choirs growing up, so learning choreography for most was a big step. In the early years, they danced the choreography to the recording of the songs and sang along to the studio singers. It was at least fifteen years before they became confident enough to learn the vocals and perform live with the band.

Now, so many of the directors were in their high school show choirs, and because we now have a program for choreographers, the teachers’ show has become a very impressive and polished performance. For those directors who are just getting started in the show choir world, it is the perfect opportunity to jump in and really understand what their students are being asked to do and to have a blast doing it.”

Show choir was a relatively new thing for schools in the 80s, so we can understand that the teachers were—for the most part—unfamiliar with dancing and singing at the same time. What are the most significant changes you have seen in the industry and implemented or developed yourself between your first year and 2019?

“The production level of shows has continued to grow year after year. We are proud to have been a part of that journey, offering workshops and sessions in every aspect of show production. The development and the attention to details in all areas of the show, including costuming, elaborate sets, lighting, and tech has been fun to watch. But in the end, it still all comes down to great singing and great dancing.”

The pandemic obviously created another significant change. This magazine published an article on your 2020 virtual camp plans. What was the outcome of that camp?

“We were so pleased with what we were able to create. It was definitely harder than we thought it would be, but our team really took it to heart to find ways to make the virtual experience as close to and as rewarding as our regular camps. Particularly for the teachers, we were able to find workshop subjects that prepared them for what was going to be a very challenging year.

What are some of the workshop subjects from 2020?

“We had a clinical psychologist who is a Resilience and Well Being Expert provide teachers with tools to stay resilient during this trying time. During a panel titled “Virtual Victory,” we discussed how to make teaching music in a virtual setting a meaningful and inspiring experience when you don’t even know where to begin. Another session gave advice on the technical aspect of how to successfully teach choreography and vocal parts while still in a virtual setting.”

“We received so many positive comments that the information they received that week gave them the confidence to tackle the year that was in front of them. Our second year of virtual SCA was equally successful. We had a better idea of what to expect and were able to make some improvements. Most importantly, it provided the chance for everyone to be together for the week. SCA has become such an important network for the teachers and choreographers who always attend. Having the chance to share this time together has become the summer lifeline they all need, and we were so glad we were able to keep it going during the pandemic.”

I think everyone is grateful for the digital tools available to us now that helped us stay connected during the pandemic, even with lag times and connection interruptions. Your 2022 camps are in-person, June 19-25 at Millikin University in Illinois, and July 10-16 at Heidelberg University in Ohio. What are you most looking forward to at this year’s camps?

“It’s pretty obvious—the chance to finally have everyone back together again, doing what we all love.”

Are you incorporating anything you learned and used during the virtual camps?

“With the virtual camps, we were really trying to anticipate what the teachers were going to need most to help them prepare for the next year. We have always attempted to do that, but this experience definitely reminded us how important that is for everyone.”

That must be one of the reasons SCA has been so successful—making sure you are providing the participants with valuable content. Will you provide anecdotes that illustrate your mission and reason for offering your camps?

“We love hearing from participants. Here are just a few comments that we have received from teachers that remind us of the impact that SCA has had over the years:

I am largely who I am in part thanks to SCA! It has become a fixture in my life that I hold dear. SCA is perfect for the aspiring student musician as well as the teacher who wants to know more about show choir. The fellowship and networking is enough to bring a teacher back!
Coming in without a clue of what to expect, SCA was the perfect opportunity for me as a new show choir director to leave my comfort zone and grow as an educator, a musician, and person with some of the most amazing choral pedagogues in the world.

The friends you make and the memories that are made is the reason I love coming back!
“When Sue Moninger and I were given the unbelievable opportunity to create what was to become Showchoir Camps of America, we had a clear vision of what we wanted it to be. With the mentorship of Jim Kimmel and the support of incredibly talented clinicians, this dream of ours came to life. The element we did not anticipate was how this network of teachers and campers would continue to grow year after year, and how someone’s chance meeting at SCA would create not just lifelong colleagues but lifelong friends. Sue and I thought we were starting a camp, but we actually started a big family.”

Today, with two camp locations and around two hundred directors—and over twelve hundred students from more than thirty states—attend SCA each summer. Showchoir Camps of America has become a very big family indeed.

About the Author
PUPN staff writer Lisa Gibbs earned her Ed.D. in Higher Education Administration in 2018. She is an advocate for arts, particularly dance, in education and for increasing the financial well-being of artists through financial education.
Read more from this author
Share
Share this:
Digital
PDF
Issue
More Articles for You

10 Reasons to Hire a Tour Operator