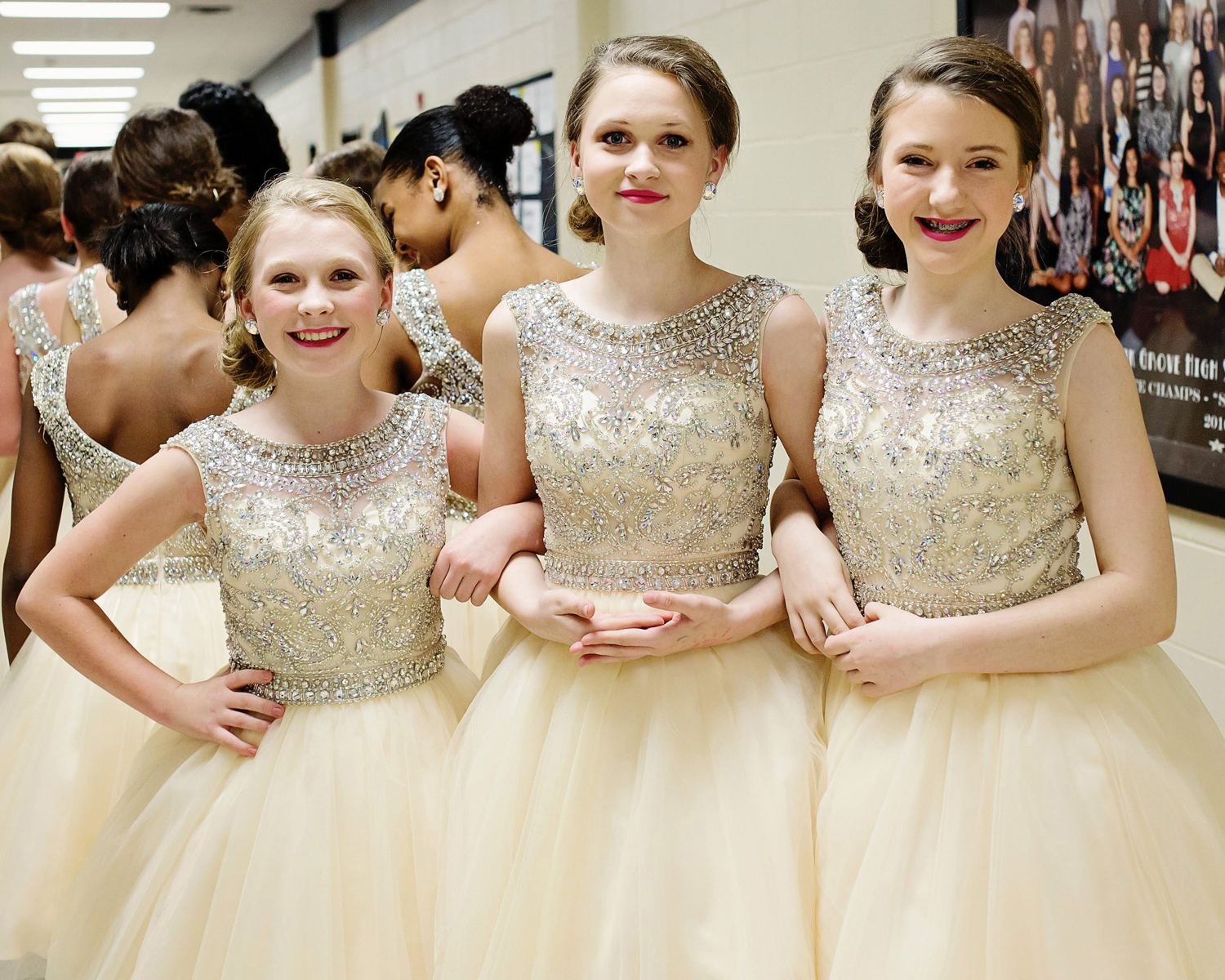 This carefully cultivated group of 54, a combination of singers and dancers, boasts an expansive competition schedule each year. With their hometown of Hattiesburg, MS, being the third most visited city in the state, the show choir group makes appearances at local festivals, an annual performance at a national caliber competition, and hosts the Magnolia Invitational, a joint effort between Spotlight and the group’s respective feeder school. Nestled in the Oak Grove Community, a suburb of Hattiesburg, Mississippi’s highlighted Hub City, Oak Grove Middle School is the largest middle school in the fourth fastest growing school district in Mississippi. Success in extracurricular activities is no stranger to the Oak Grove Community. The middle school alone boasts state championship cheer and dance troupes, and the high school has laid claim to numerous state show choir titles over the past two decades.

A Story of Vision, Determination, and Growth

Spotlight’s journey is a story of vision, determination, and growth. In the group’s formative years beginning in 2009, the group had an all-female membership as large as forty; however, only 8th grade students could participate. By 2012, the group had dwindled down to seventeen female performers. Since then, Spotlight has transformed into an extensive performance ensemble involving students in grades 6-8, that delivers varsity-level performances with top-notch costuming, a ten-member instrumental ensemble, and modern, innovative, and demanding choreography.

As the president of the Parent Organization, Blake Thames Ogletree notes, “The face of choral music at OGMS has transformed in just a few short years. Spotlight didn’t even exist a decade ago, and now it is known as one of the premier groups in the region. Student involvement has exploded during that time, and it’s an amazing cross-section of the student body. Membership includes football and baseball players, dancers and cheerleaders, student council members, honor society officers and more. We are one of the most diverse groups at the school, and I believe that diversity helps make us successful.” Students who are selected for Spotlight balance rigorous rehearsals, demanding academics, and all are involved in athletics.

The group’s success, over the past five years, is no stroke of luck. Through careful planning and a vision executed by the ensemble’s leader, Toney Keeler, Spotlight is redefining the scope of middle level show choir ensembles. In year five as Director of Choral Activities at Oak Grove Middle School, Keeler has seen Spotlight through major growth. Keeler arrived as a rookie teacher in 2012 to a choral program that boasted over 200 students. Although thriving in the choral aspect, with an assortment of extracurricular activities to choose from, the show choir was struggling to maintain its identity among a student body of 1,300 students.

Keeler spent his first year of teaching solidifying the choral tradition that had been established by his predecessor while instilling fundamental vocal and performance techniques into his meager but eager show choir. A large task for Keeler was educating the community and students about show choir and its worth to the performance world. Every community has seen success at the high school level, but the general perception is that middle school students “just didn’t do show choir.” As the school year came to an end, Keeler scheduled a school performance featuring the high school show choir and enthusiastically recruited new members for the middle school show choir, Spotlight.

As Spotlight thrives, the ensemble remains true to the program’s roots as a successful concert choir program with vocal development, diverse choral repertoire, and theory instruction as the crux of the music curriculum. In order to maintain membership in Spotlight, students must enroll in their respective grade level concert choir. The program’s concert choirs Cambiare, Con Spirito, and Cantabile boast a tradition of superior ratings in performance and sight reading at both the District and State level. There is one thing that sets Spotlight apart from other middle school show choirs: Leadership.

In the development of what has become Spotlight’s signature show design, Keeler states that he has “never let the notion that these students are middle schoolers” stop him from planning vibrant shows, elaborate costuming, and ambitious trips. An energetic opener, upbeat novelty number, meaningful ballad, exuberant male and female features, and a riveting closer have become the structure that has wowed adjudicators and audiences alike. In comparison to what other ensembles do in the area, Keeler’s show concept is quintessential; the focus is always on vocal integrity while utilizing movement as enhancement to the text. “While it is important to plan with the limitations of the singers in mind, I truly believe that musical experiences are what you make of them. I have always set the bar high for my students, and I will always treat my students as young adults,” Keeler states.

Expecting a Higher Level of Commitment

That reinforces the fact that the leader/director expects a much higher level of commitment from each performer. Higher expectations set the tone for performances and rehearsals. Spotlight’s choreography is intricate but effective. Kyle Aiden, a Wisconsin-based choreographer and clinician, comments on his experience with Spotlight, saying, “I have had the pleasure of working with Spotlight as both a clinician and choreographer. It is so refreshing to work with a group that is willing to make changes and run with them. There is little to no complaining by the performers when you take the show and drastically alter it. Toney knows what he wants, what his kids are capable of, and how to get the best result.”

Spotlight’s creative team is comprised of several choreographers, a vocal and instrumental arranger, costume consultant, and a choral assistant. Under Keeler’s leadership, the ensemble is exposed to instruction that is challenging but curtailed to the students’ ability with the ultimate goal of education through performance. Compared to other show choirs in the circuit, Spotlight’s competition shows are rather simple in structure: no elaborate sets, no thematic show design. However, the refined, charismatic performances from the ensemble are entertaining and relatable to all audiences.

As Spotlight has grown, today in 2017, a crucial aspect of its growth has been the parent support group that Keeler developed during his second year as director. The parent group has assisted him in realizing costuming, publicity, and logistics for performances. You’ll find parents involved in every aspect of Keeler’s organization from ticket sales to back stage crew. Parents eagerly invest in the program. Keeler believes that the parents have really gotten behind the group because they see their children being challenged, achieving goals, and becoming better people. The skills gleaned in Spotlight clearly go beyond the stage. The skills learned are for life. The parent organization has also been very active in establishing a community image for the ensemble. Ogletree comments, “Getting to peek behind the curtain and see everything it takes to make the magic happen was eye-opening. From doing our own costuming to securing musicians, and from fundraising to recruiting parent volunteers, it’s very clear that none of it would be possible without a huge investment on the part of families.”

Walking into a Spotlight rehearsal is sort of like organized chaos, to be honest. You’ll find parents completing last-minute alterations and coordinating the evening meal, students rehearsing a last-minute dance sequence, and instrumentalists rehearsing a cut in the music. But one thing is certain: There is a positive energy in the air that shows perseverance and hard work. As Keeler outlines the goals for each rehearsal, the tone of his voice is one that is firm and recognizable, yet understanding. The path for Keeler and the renowned middle school ensemble, Spotlight, is a remarkable story that proves that students of any age can experience success in music.

All photos by Suzanne Carey Photography

About the Authors
Raven Brooks is a member of the Hattiesburg Tourism Commission team.

Toney Keeler is in his fifth year as director of Choral Activities at Oak Grove Middle School.
Read more from the authors