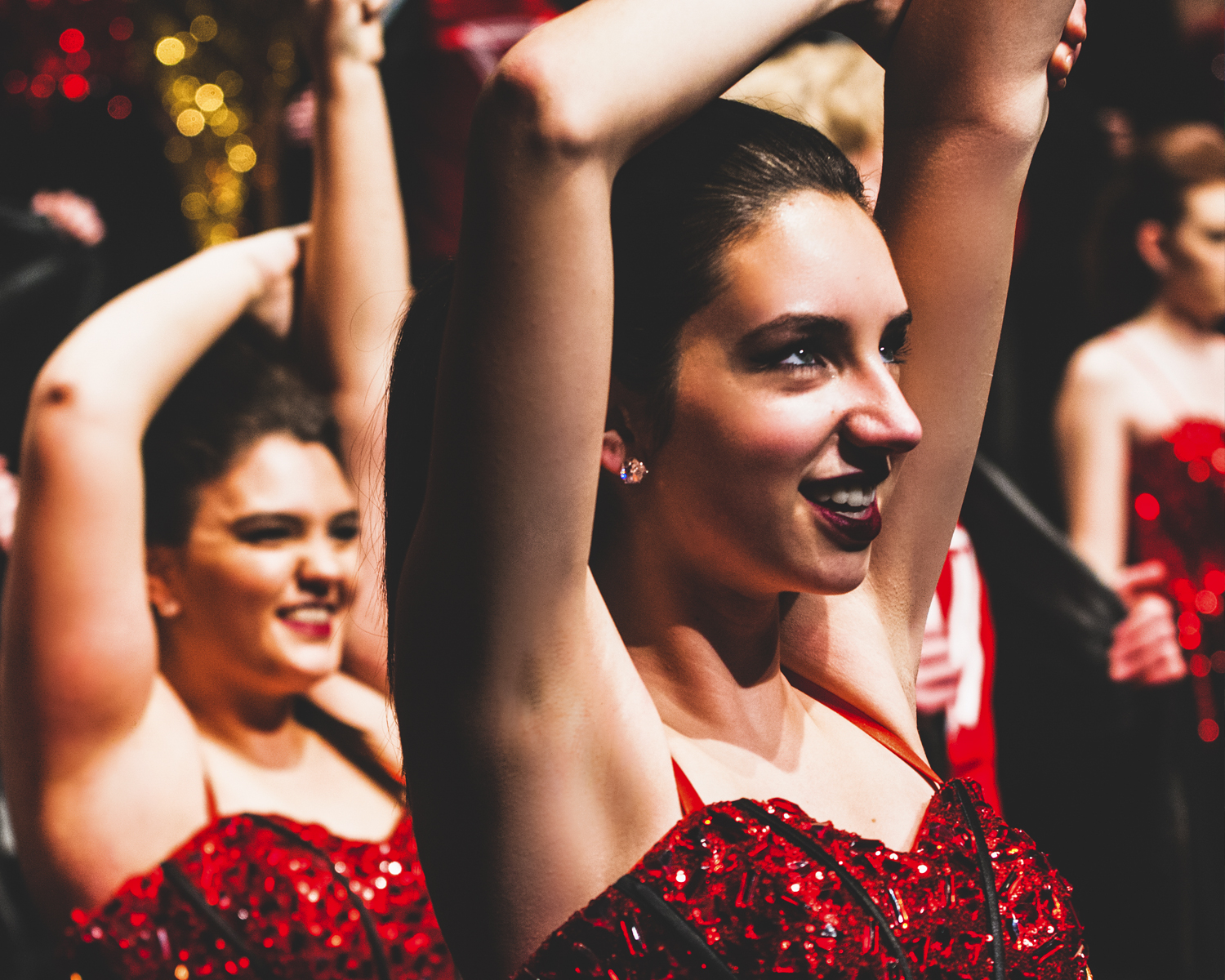 Share
Share this:
Digital
Issue
Linn-Mar Show Choir program is comprised of three show choirs: our women's prep group, Hi-Style, the mixed prep group, In Step, and our mixed varsity group, 10th Street Edition. In all, there are over 150 singers, approximately 50 band members, and 35 crew-members. In total, nearly 10 percent of Linn-Mar High School students are involved.

The love, support, and dedication that all the students show has fostered a sense of community which has been passed down over the last two decades and is surviving through the transition of changing leadership.

In the past three school years, the choral department has gone through some major changes in its staff. In the 2014-15 school year, Trent Buglewicz was hired to direct Hi-Style in its first year as an all women’s ensemble. The 2015-16 year marked June Schmidt’s last year directing In Step, the mixed prep ensemble, which was taken over by Jaclyn Hussey in the 2016-17 year. Bob Anderson stepped down as director of 10th Street Edition, the mixed varsity ensemble, this 2016-17 season, handing the directing seat to Trent, as Anderson plans to retire after this school year. It’s a lot to keep up with, so I don’t blame you if you got a little lost.

As any of our directors will tell you, the heart of the Linn-Mar choral department is choral singing, which was a focus that began with Anderson; 10th Street Edition first began in 1990 under his direction, and he is currently in his last year of teaching at Linn-Mar High School. Anderson not only developed 10th Street Edition and established the traditions of this group, but he has helped his students, past and present, to become better musicians and better humans. Anderson’s teaching methods are inspiring through his ability to make his students feel connected to the music, while showing how each student’s impact on the world is important. Because of him, the singers in Linn-Mar’s show choirs are extremely talented, dedicated, and hardworking.

Linn Mar’s mixed prep group, In-Step, began under the direction of June Schmidt, and since her retirement last year, has been under the direction of Jaclyn Hussey. Both women are passionate about their work, and both genuinely care about their students. Schmidt made it a point to directly connect with all students in her path, showed immense compassion, and always had an open door. She was never afraid to share a story that could inspire, even if it meant she had to be vulnerable. Hussey has also been an excellent and highly dedicated director to the students involved in In-Step, and students in her show choir say that she genuinely cares and strives to know each of her students as individuals.

Three years ago, Trent Buglewicz began his journey as a choral director at Linn- Mar and started by directing the women’s prep group, Hi-Style, along with assisting 10th Street Edition. It is now his third year at Linn-Mar, and he is already the head director of both 10th Street Edition and Hi-Style. The amount of dedication Buglewicz has for his students is obvious in the amount of time he spends outside of what is required in his job title. Countless hours are spent on his part designing the shows for both groups, prepping for rehearsals, and constantly thinking of ways to make the program more successful. Through him, students are always reminded that if there is love and investment in the product created, then whether a first-place trophy is earned from every competition is unimportant.

Buglewicz constantly uses the phrase “Team before me” during rehearsals, highlighting the fact that in order to succeed, the group needs to work together and move past their own selfish desires in order to better the product overall. Show choir at Linn-Mar is about everyone involved, and while the directors want every student to have a great personal experience, you get there by securing an amazing group atmosphere.

This year, 10th Sreet Edition is putting that motto to the test by going in a new direction, presenting a story-line show featuring two lead soloists. Although at first some might have felt that they’re not as important as the leads, everyone has come to realize that each person on the stage has an essential role in making the story come to life. In the way he motivates and unifies each group, Buglewicz has continued to foster an experience in show choir that bonds people and creates lasting friendships and memories.

The directors at Linn-Mar are not only excellent musicians and educators, but also mentors, providing advice for any situation or predicament. Because the directors are open about their personal lives as well, it makes for a student and teacher bond hard to find elsewhere, one with an insanely high respect level. Above all else, the directors strive to influence the students to be humble, thankful, all around good people, and to show an immense amount of support towards every other school with whom contact is made.

That being said, the Linn-Mar show choir program wouldn’t work without the crew backstage, the band upstage, the family and friend volunteers on the sidelines, and the choreography from Lexi Robson and April James. From sorting through sweaty costume pieces to holding inhalers and water bottles off-stage, crew-members will go to any lengths to ensure a show runs smoothly. The members of the band are crucial to the success of the show choirs, with members putting in many hours of rehearsal, both playing and waiting on standby until they are needed.

The support from family and friend volunteers working on costumes, organizing food,driving the equipment trailer, and spending the time and money to cheer the students on is also vital. The Linn-Mar show choirs pride themselves on the difficult and artistic choregraphy provided by Lexi Robson and April James, adding to the success of the program.

Leave Your Ego at The Door

The show choir’s main focus has been on unifying the group to make a successful product. A sign in the choir room hangs on the wall stating, “Leave your ego at the door.” This reminds students to be thinking of their peers, inspiring everyone to make a deeper and stronger connection to their group.

A lasting tradition of 10th Street Edition has always been to sing the Linn-Mar Alma Mater, both down the halls before competing and after any rehearsal where progress is made. This tradition stems from always remembering the legacy that was built and to also strive to continue that legacy in an impactful way. Everyone involved in the Linn-Mar Show Choir Program is essential to the success, remembering that success does not always derive from placements and trophies. Success is determined through lessons learned and memories made.

About the Authors
Claire Murrell and Katie Andreasen are Linn-Mar students.

Lexi Robson assists with choreography for Linn-Mar.
Read more from the authors