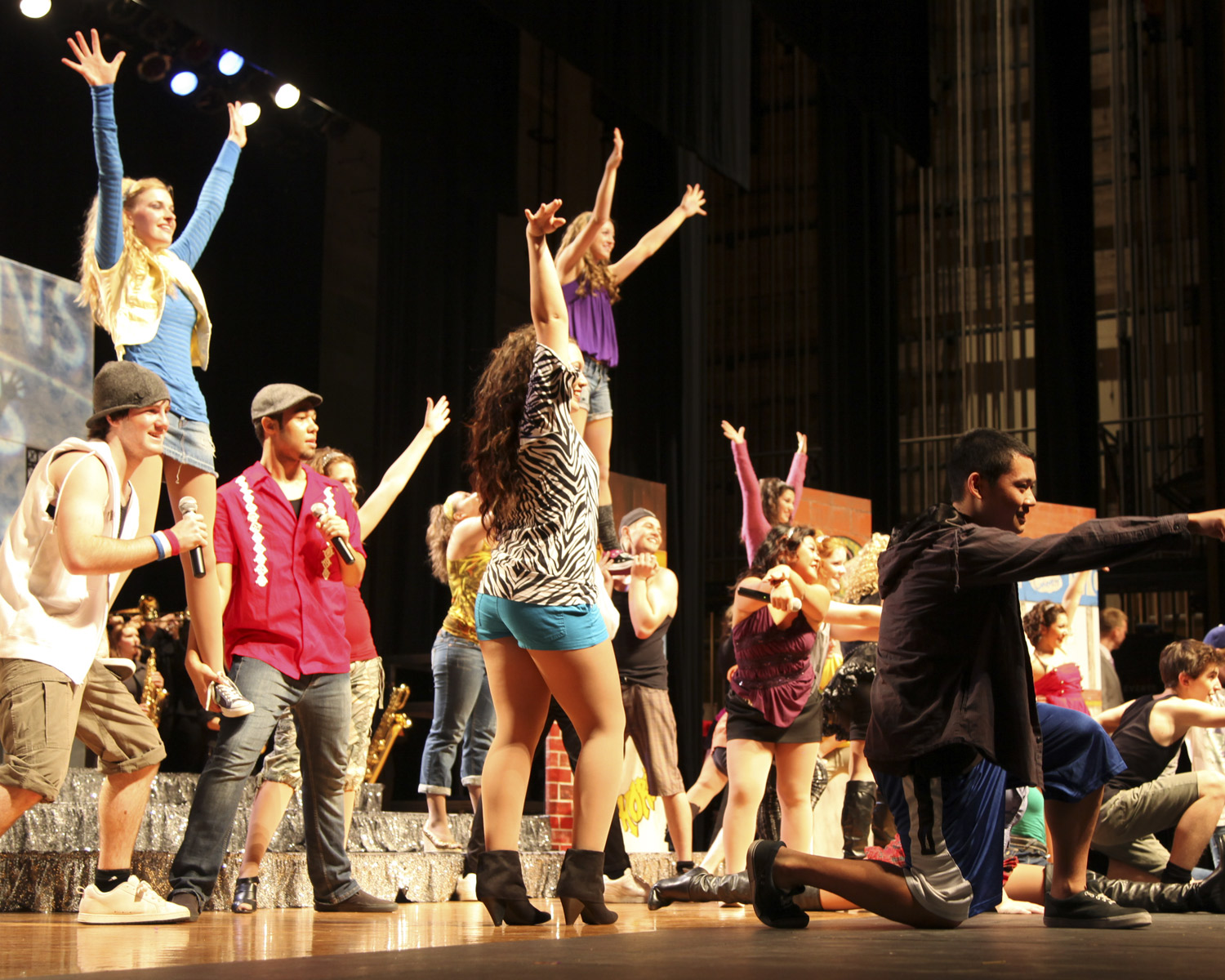 Share
Share this:
Digital
PDF
Issue
In the spring of 2015, the FOX series "Glee" aired its final show, concluding six seasons and 121 episodes that together contained more than 700 musical numbers. While credited with raising the visibility of show choirs, this popular series did not capture all the factors critical to a successful show choir program.

From the directors we talked to, three key ingredients — all downplayed on “Glee” — are setting expectations, building support and choosing the right foundation.

The limits of a 43-minute episode meant that “Glee” could never represent the countless hours of singing and dancing rehearsals required. Only show choir insiders could understand the tremendous work involved. This point was brought home to Jeff Kelly several years ago; he directs the Jefferson Connection show choir at Bloomington Jefferson High School in Bloomington, Minnesota. The local FOX affiliate invited his group to give a mini concert. “On short notice, they wanted us to perform two brand-new songs at their studio, along with the “Glee” theme,” he recalls. Although initially intrigued, Kelly eventually was unwilling to disrupt his group’s regular rehearsals to accommodate a brief TV appearance. “I turned them down, as did other area show choirs,” he explains. “I think it was a learning experience for this station; they later simplified the request by asking local show choirs to perform a song already in their repertoire.”

Amy Fambrough agrees that “Glee” fostered unrealistic expectations, even among some students new to  show choir. “They didn’t realize that what they saw on one episode might represent six months of rehearsals in the real world,” she says. Fambrough is choir director at Timber Creek High School in Keller, Texas, where her show choir learns from 20 to 25 musical numbers each school year. She has found that parents often share these unrealistic expectations, particularly about the commitment their child is undertaking. Fambrough first required parents and students to simply sign a participation contract, but later decided more was needed. “Several years ago I had to remove a student for poor attendance,” she recalls. “When the parents complained, it was obvious they hadn’t read the contract they signed.”

The past three years she’s held a mandatory parent meeting before student auditions, to educate parents and encourage buy-in. At this meeting, she details expectations, benefits of participating and costs. (Last year’s show choir fee was $275, not including uniform and shoes.) The team aspect of show choir is also emphasized because the group’s development is hampered when even one student is absent.

Instilling the values of personal responsibility and accountability teaches life lessons that directors believe will resonate far into the future. “With contests, sometimes you win, sometimes you don’t,” explains Kelly. “But the season is truly successful if the students learn, enjoy and grow from the process of working together as a team.”

The team aspect of show choir extends beyond the performers to the numerous volunteers who help pull everything together. Yet these vital behind-the-scenes roles received scant attention on the TV show. “Today you need an army of assistants, including costume designers, set designers and builders, music arrangers, choreographers, vocal instructors and instrumental instructors,” says Dan Neece, who recently retired after directing show choirs for 40 years, including the last 30 with the Starship show choir at Enterprise High School in Redding, California. When canvassing for volunteers, Neece solicited both current and past parents. “There’s always somebody out there – everyone wants to help kids.”

Kelly encourages directors to nurture this network. “Some directors feel like they have to do everything themselves-I’m not sure why,” he explains. “It takes a number of quality people around you to make it work.” Beyond the performance-focused volunteers is usually a broader network involved with fundraising and advocacy.

Actually, those episodes never happened. Reality is more challenging. Neece explains that his choir began holding a week of fundraising concerts in late February, just before contest season. For four consecutive school days, elementary and junior high students were bussed to Enterprise High School for an abridged, one-hour show in the 1,100-seat auditorium.

Students were charged several dollars per ticket, with scholarships available. Senior citizens received free admission. For five nights that week, Starship performed their full two-hour show, with tickets priced at $8. “People will spend money to see kids perform,” Neece states, noting this week of concerts typically raised more than $40,000, a figure supplemented by program advertising and raffle tickets. Along with the potential for high revenue, such performances offer another important advantage: cookie-dough sales cannot improve choreography and car washes do not help intonation. By the end of that busy performance week, Neece says Starship was ready to compete.

Public concerts like this also serve to build awareness for your program, creating valuable goodwill. Fambrough consciously limits the size of her show choir-32 students next year-so they can accommodate performances in the community, including grand openings, open houses and other civic events. “Fitting 50 students in many of these sites would be impossible,” she states.

Her own personal advocacy efforts included three years of lobbying that recently culminated in show choir students earning physical education credit in her district; this is uncommon in Texas. “Many of my students are in multiple activities and found it difficult to fit in all their requirements,” states Fambrough, who expects to complete her PE certification training soon. “Marching band already had this for years.”

Bert Johnson, vice president with FAME Events in Mesa, Arizona, is not surprised to hear about the efforts of Fambrough and her peers. “I think show choir directors put in double the time of regular choir directors,” he states. All the parents, volunteers and advocates help maintain and build successful programs.

For many beginning choirs or show choirs in certain parts of the country, staging is foreign equipment. Johnson says performing on a flat floor is common outside the main “Show Choir Corridor”-an area centered in the Midwest, with smaller pockets into California, the South and Northeast.

This year FAME celebrates 20 years of hosting show choirs competitions across the country. Most FAME contests take place on sixteen 4′ x 8′ staging platforms of various heights (8″, 16″, 24″ and 32″). “Groups that come to our events with no intention of using staging quickly see the benefits,” explains Johnson. These include better visibility for all performers, improved sound projection and increased choreography options.

“If choirs cannot afford their own full set, even a smaller number of platforms will make a big difference,” notes Johnson. When directors ask him for staging recommendations, he stresses these key factors: lightweight portability, rock-solid stability and creative flexibility. He says probably 30 percent of the choirs he sees go far beyond the traditional 4×4 platform arrangement, employing many imaginative configurations.

Imagination also inspires creative ways to either disguise or accentuate the platforms. For some shows, Enterprise Starship uses fog machines to create a hazy effect; for other shows, custom-made plastic inserts illuminated the gaps between platforms with colorful, battery-powered lights. Some choirs create a staircase look with solid wood facing. Behind the platforms, competition sets commonly feature painted scenery or backdrops. Other elements include large video screens or onstage curtains for dramatic impact and costume changes. While money certainly helps show choirs pay for staging, equipment, travel and costumes, Johnson believes the necessity of money is a misconception. “Good direction, committed volunteers and simplified sets can go a long way,” he concludes.

The Hollywood version of show choirs depicted on “Glee” can certainly be enjoyed as entertainment, but insiders know that the FOX series wasn’t reality TV. By properly setting expectations, nurturing support and selecting the right foundation, show choir directors are creating strong programs that achieve renewed success season after season.

About the Author
Stacy Hanson is marketing communications manager with the Wenger Corporation of Owatonna, Minnesota, which makes a variety of music education and performance equipment. Wenger is an official partner of the Show Choir National Championship Series produced by FAME Events, and supplies staging and risers to nationwide FAME events.
Read more from this author
Share
Share this:
Digital
PDF
Issue
More Articles for You