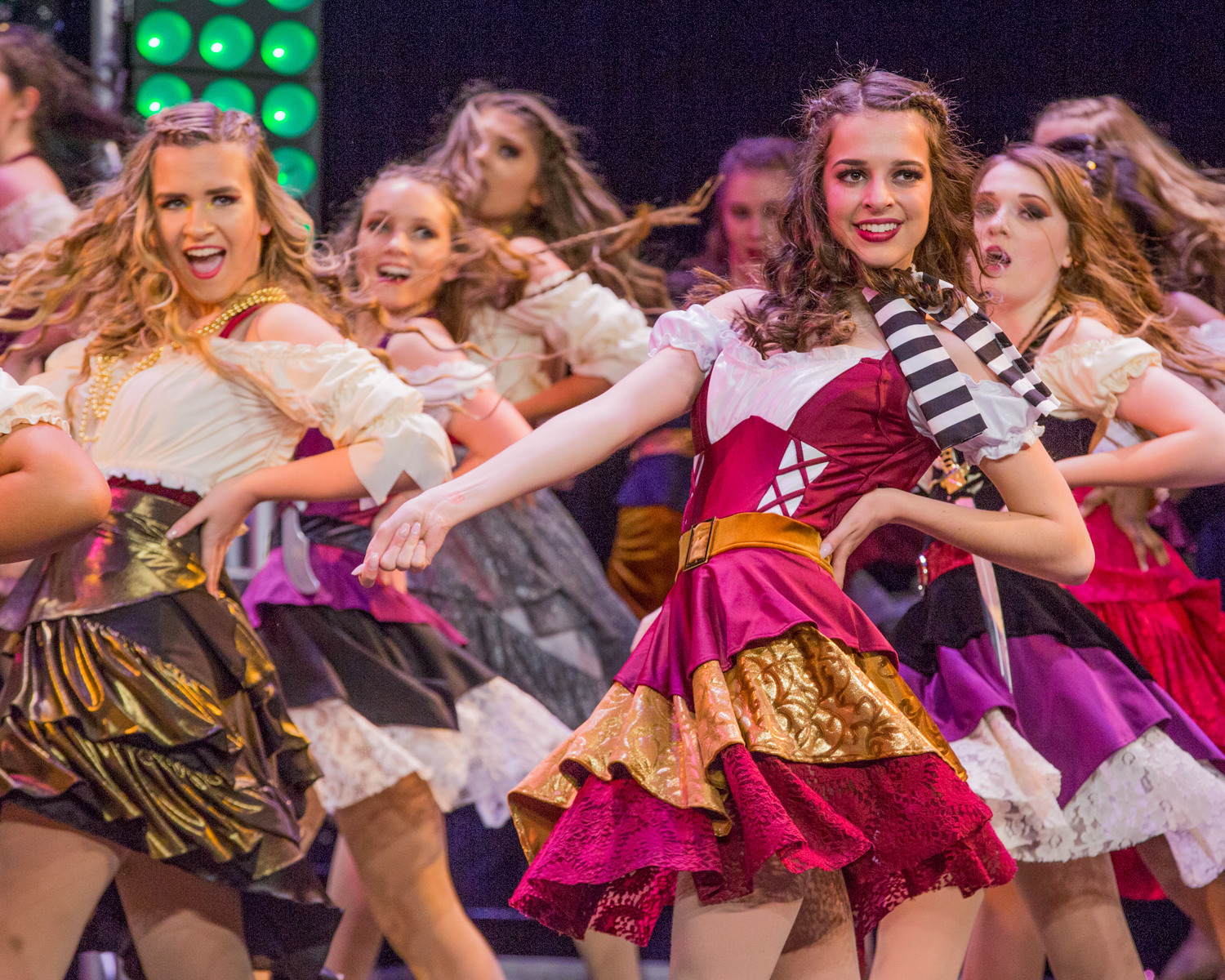 Share
Share this:
Digital
PDF
Issue
Across most disciplines, working collaboratively is tantamount to success; show choir is no exception. To put on a show, most schools have a large productions team including directors, choreographers, costumers, lighting designers, arrangers, parents, and so on.

Getting to Know the Team

Raunick, originally from New Jersey, came to Indiana to begin his student teaching with NCHS and has risen to the position of choral director since then. Similarly, Breeze was hired to do his first ever arrangement for the Descants when he was still a student at NCHS, and has now grown into a nationally respected professional hired by 30 schools. He is now a highly sought after choral arranger and owner of Breeze Tunes.

Finally, Nelson, the owner and head costume designer for Satin Stitches, has been working in fashion design her entire adult life; her business first involved mostly formal wear, and as her career progressed, her love for the glitz and glamor came into fruition. The Descants is an all-female choral group, comprised of 55 sophomore to senior students.

This team of students and professionals recently came together to create their 2019 Pirates and Police show.

Anybody who has to consistently be creative knows that inspiration can come from just about anything and anywhere. Raunick’s concept for Pirates and Police was originally influenced by Gilbert and Sullivan’s Pirates of Penzance and “Poor Pirates” from Spongebob Squarepants: The Musical. From these seeds sparked the development for the entire show. Once the idea and themes were established, Raunick and Breeze began collaborating on the music. When Breeze is arranging for a school, his goal is to highlight the students’ strengths, and design music that will be “best for the kids.”

Breeze’s creative process of choosing and adapting songs has developed over years of soaking up music-he listens to a wide variety of styles and does his best to stay up-to-date on what songs are out there. Sadly, due to Copyright Laws, many of the primary inspirations for the show, “Poor Pirates,” could not be included in the 2019 Descants’ performance.

However, Raunick and Breeze did not let this dampen their spirits. Instead, Breeze constructed a completely original song for the girls to perform and set the swashbuckling tone of the show. As the men and the students continued working on music, Raunick and Nelson begin collaborating on costumes.

Raunick explains that he wanted to give Nelson virtually unlimited creative control over the design of the costumes; he knew he wanted the girls to look like pirates, and he wanted all fifty-five costumes to be individualized-aside from that, Nelson and her team of designers were free to develop their vision.

Nelson explains the inspirations for the costumes were heavily influenced by theatre costuming (as opposed to the more traditional show choir look). The end products are something the whole team of Satin Stitches and Raunick are very proud to display at competitions.

Working as a team requires a lot of emails, phone calls, and nearly endless amounts of energy. According to Breeze, there were many late night conversations with Raunick trying to sort out show logistics. In general, collaborating is a lengthy process, mostly due to the back-and-forth nature of creating.

For instance, of the fifty-five dresses made, there are four main designs, which could be mixed and matched with different colors, fabrics, and accessories. After the base design was settled between Nelson and Raunick, the girls were given sample fabrics and accessories and asked to design their own individual dress.

As Raunick put it, he wanted the girls to feel like the dresses were theirs. “The workload is very intense,” says Nelson, “but the payoff is incredible.”

Hiccups Along the Way

Much like pirates, show choir professionals can expect some rocky seas. In addition to the Copyright Purgatory putting Raunick and Breeze in musical limbo for months, simply finding the time to talk and collaborate has its difficulties. Luckily, there seems to be a strong sense of camaraderie within the show choir community, and many of the partnerships are more than just business relationships, and are true friendships.

This sense of togetherness makes the stressful process of creating a show more fun for everyone involved. Additionally, figuring out the logistics, such as costume changes, proves to be one of the greatest challenges in planning the show.

All of the girls change from pirates, to police, and back to pirates again.

This is a challenge, because due to the quick turnaround in outfits, the chaos of backstage has to be organized; if the girls are too hasty in taking off their pirate costumes, when it is time to change back into them, it may take too long. Eventually, logistics are ironed out, and the show consistently goes off without a hitch.

When recalling their proudest moment, Raunick and Breeze spoke highly about the girls of Descants. Raunick, in particular, speaks about all the hard work the girls put into making the show as strong as possible, and how they make his job even more fun.

As he put it, the girls push themselves, and he is just there to help them reach their goals. “[The Descants] are one of the best” show choirs Breeze has worked with throughout his career; due to their talent and eagerness, Breeze feels like he can take more innovative risks with their productions.

Another noteworthy collaboration involves one of the parents. In addition to the beautiful costumes created by Satin Stitches, one of the Descants’ moms, Lisa Voy, repurposed and reconstructed old dresses from a previous season to make the Police costumes. She spent dozens of hours altering gowns from seasons past, in order to make completely original police uniforms for all the girls.

Breaking into the show choir world is no easy feat. Nelson recommends to anybody wanting to utilize custom costumes to be prepared for a possible clash between creativity and cost. There are times in costuming where the details will offer little more than an increased invoice, because certain details will not translate on stage; in short, be realistic.

Breeze stresses the importance of networking and developing strong, positive relationships. He explains that creating a show is a long and hard process, but when partners are friends with one another, it makes the experience easier.

Furthermore, by attending competitions and judging, he has been able to meet directors, other show choir professionals, and get more referrals, which has allowed Breeze Tunes to grow.

Finally, Raunick tells all future or up-andcoming directors to follow their passions. Students will be more driven and excited when it is clear their director is excited, because his/her energy will be the driving force behind the choir. When a director listens to his/her heart, and does what is best for the students, the director can also feel more comfortable taking risks and pushing boundaries.

He also warns against getting too captivated by the advice of other directors-just because there is a traditional way to create or perform, that does not mean the traditional way is what is best for him or his students.

Anytime there are many opinions coming from different directions, it can be difficult to remember the original goal of the collaboration. This is why it is important for directors to surround themselves with people who are just as passionate as themselves.

Teamwork is about much more than a product or success–it is also about growth. When collaborators are fair and respectful, all members involved have the opportunities to learn and develop.