Create the Best Opportunities for Students to Shine 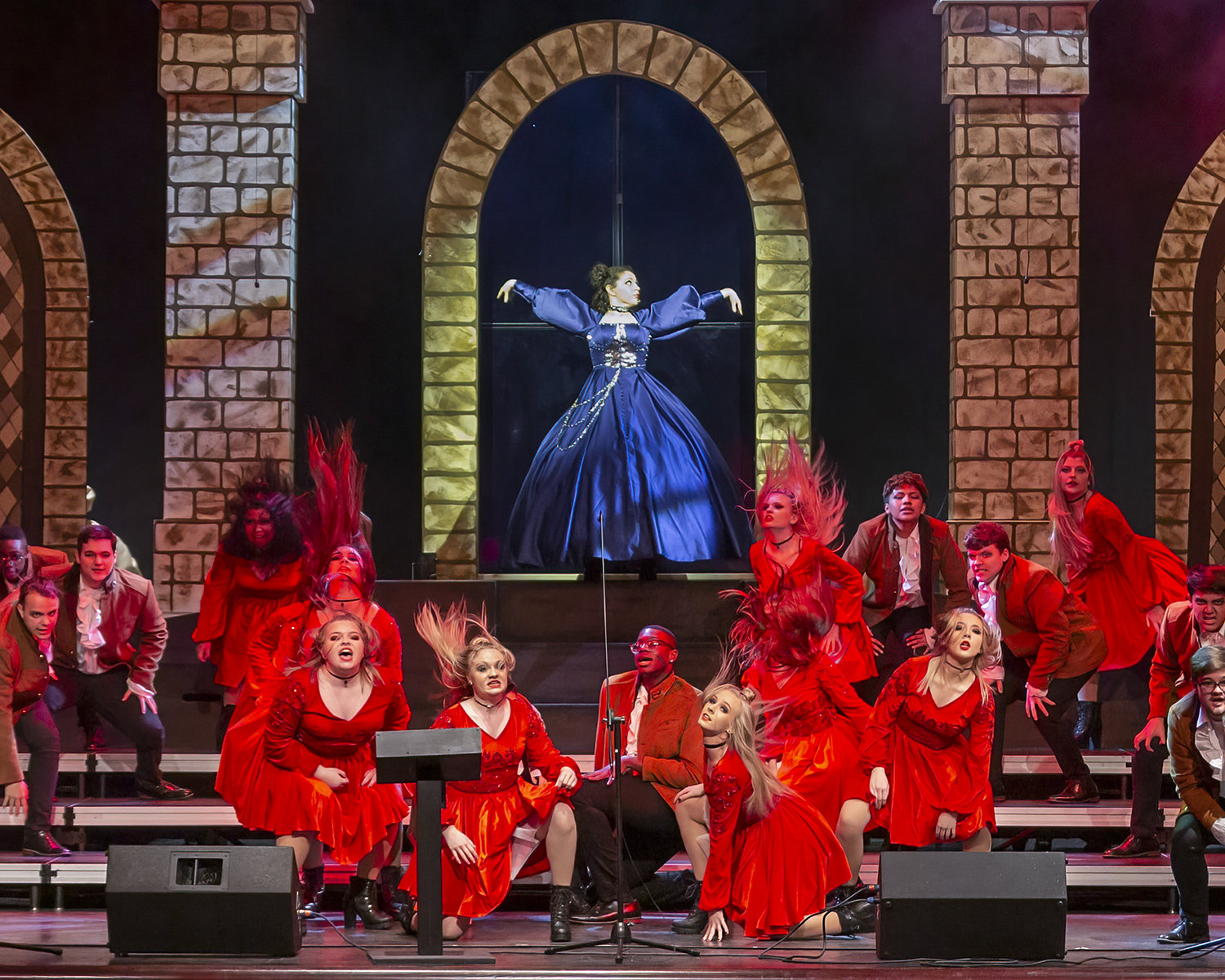 Share
Share this:
Digital
PDF
Issue
Albertville, Alabama is a town of around 22,300 residents located southeast of the more populous Huntsville. It is the home of Albertville High School Choir, where students can expect “a professional-level vocal arts program which emphasizes work ethic, perseverance, team dynamics, creative problem-solving, self-growth, and independent learning through the rehearsal and performance process,” according to director Gavin Dover. Currently the program consists of two show choirs, a mixed a cappella ensemble, and a women’s chorus, plus a band and a technical crew. The students study and practice all genres of choral music, which, as Dover says, “elevates their abilities on the show choir stage.”

Albertville, Alabama is a town of around 22,300 residents located southeast of the more populous Huntsville. It is the home of Albertville High School Choir, where students can expect “a professional-level vocal arts program which emphasizes work ethic, perseverance, team dynamics, creative problem-solving, self-growth, and independent learning through the rehearsal and performance process,” according to director Gavin Dover. Currently the program consists of two show choirs, a mixed a cappella ensemble, and a women’s chorus, plus a band and a technical crew. The students study and practice all genres of choral music, which, as Dover says, “elevates their abilities on the show choir stage.”

As a student, Dover immersed himself in the performing arts. Now an educator, he blends his passion and experience together to create an environment of joy and excellence for the students. In this interview, Dover shares his process for creating original show choir productions, ways to cut costs, and ways in which his classroom is a place for creativity and inclusion.

CenterStage! focuses on entertainment and incorporates original storylines, casts of characters, elaborate costuming, and interactive sets. What is the process for creating this type of show?

Albertville CenterStage! was actually one of the first show choirs to begin incorporating storylines, characters, and large-scale sets. Founding director Scott Rains put theatrical show choir on the map with the 2010 CenterStage! competition set, Faces. In the years following, CenterStage! was consistently known for pushing the boundaries of what a show choir could be. It has been an honor to be able to continue that legacy.

As show designers, our minds must always think, “what is going to give the best opportunities for our students to shine?” We typically spend January through April coming up with a list of general topics, themes, historical happenings, fictional worlds, and famous individuals that could potentially become a show. Once auditions have taken place and a group has been selected, we have to think on what the strengths of the group we have are going to be. Will their talents best lend themselves to something darker, something brighter, something character-driven, or something more traditional?

Once a source of material or theme is selected, we make a Spotify playlist and begin uploading music into it that fits the atmosphere we are trying to create and could fit the story we are trying to tell. Then myself and our creative team build a virtual storyboard. We focus first on the story itself with no songs involved and then begin taking songs from the playlist and placing them through the show where they might fit best. The process of cutting, tweaking, and adding different songs takes up to two months to make sure that we have it right.

Once the show is set in stone and sent off to our arranger, we begin designing the physical set or the world in which our show will take place. It is our goal to transport our audiences out of their seats all while staying within a small budget. We work tirelessly to reuse, recycle, and repurpose set pieces and costumes from previous years in order to save money where we can. If we find that we do not have any costumes in storage that will work for the show, we connect with a costume designer to begin building costume pieces that are going to aid in telling our story all the while making our singer/dancers comfortable and polished. For many of our more elaborate costume pieces for this year’s competition set, we found plain dresses on Amazon and embellished them ourselves! This was a great money saver in the long run.

We send our designs, music, and costuming off to our choreographer, Mike Weaver, and he comes in for a week to stage the show. Over the course of the school year, Mike visits us two more times to make changes to choreography, clean choreography, and work with us through our band/technical aspects of the show. We typically find ourselves making changes to the show weekly. This keeps the show progressing and keeps it fresh for our students.

I was in show choir back in the late 1980s, and it sure is different now! Is it unique to have the band travel and perform with you, or do most high school show choirs have this type of live music? How do you go about putting the band together?

It really is so incredible to see how far the world of show choir has continued to grow and develop with the times and with new technology. It is very common for competing high school show choirs to have live accompaniment. Many competitions have a portion of the scoresheet dedicated to the marriage between the choir and the band. Some competitions even give awards to the highest scoring band of the day!

We are extremely fortunate to have an outstanding band program right across the hall, with directors who actively encourage participation in show choir and show choir band. Through this partnership, we are able to travel with a sixteen-member band that is made up of current high school students, Albertville High School graduates, and a few adults from our community. The students fill out an application with a recommendation from their band director. We then comb through the applications and decide how many of each instrument is needed. Once that is decided and members are announced, we take one Saturday morning in October to work through playing both shows, while focusing on creating dynamic moments based on what the choir has been rehearsing. The band then begins to join the choir in their Monday evening rehearsals in November. We could not do what we do at the level we do if it were not for the dedication of our show choir band and the encouragement of our band program.

The tech crew works similarly to a technical crew for a theatre production. Do the same students work both show choir and theatre department productions?

It is very similar! Our tech crew students spend the beginning of the year learning the ins and outs of the theatre space, scenic design, scenic painting, music production, basic sound engineering, lighting design, lighting operation, costume design, and stage management. They are then able to put their knowledge to the test for the remainder of the year by implementing the skills they have learned about in real life experience. Our crew students are not required to be a part of the crew for our after-school theatre program but are encouraged to participate as they can and when they are needed.

Readers can find your bio online. What can you tell us about yourself that goes deeper than a one-paragraph bio?

My goal has always been and will always be to create a classroom environment filled with joy, love, encouragement and excellence. Through high school I was involved in every realm of the performing arts they would let me in. I was in band, choir, and theatre, and I spent my life at school in rehearsals. Now as an educator, I look back and try to ask myself what experiences made giving up monumental amounts of time and money to be involved in these activities so effortless? It was a culmination of the way that the teachers I had made me feel, the camaraderie with my peers that was created within those walls, and the safety that these classrooms created for those of us who had not found it elsewhere in school. I owe my career to the educators who poured into me as a student and created atmospheres that fostered inclusion, creativity, and acceptance… Mr. Jim Duren, Mr. Kevin Ownby, Ms. Sharon Morgan, and Mr. Ed Cleveland. I strive to teach the same principles and values learned in their classroom to my own students today.

Do you have a favorite story or anecdote from the past two pandemic years?

Last year, we participated solely in virtual competitions with the exception of one outdoor competition in April. At first we were all a bit disappointed, as most were, but then our social chairs kicked it into high gear and began creating ways for us to still enjoy fellowship and the reward of show choir competitions. They planned a viewing party in our auditorium with a “pajamas only” dress code. We laughed. We cried. We cheered other groups on. We FaceTimed with another local group that was also having a watch party and congratulated them on their win. It was definitely one of the highlights for many of us in such a crazy year.

Creating a classroom environment where students are loved, encouraged, and challenged to grow as both artists and peers—and creatively designing an original production that builds on the strengths of the students—undoubtedly uplifts each person involved in the Albertville High School Choir.

About the Author
PUPN staff writer Lisa Gibbs earned her Ed.D. in Higher Education Administration in 2018. She is an advocate for arts, particularly dance, in education and for increasing the financial well-being of artists through financial education.
Read more from this author
Share
Share this:
Digital
PDF
Issue
More Articles for You

Choir Spotlight-Brett Carroll and In Sync: Leading By Example

When Upgrading Performance Space, Don't Leave Your Lighting In The Dark