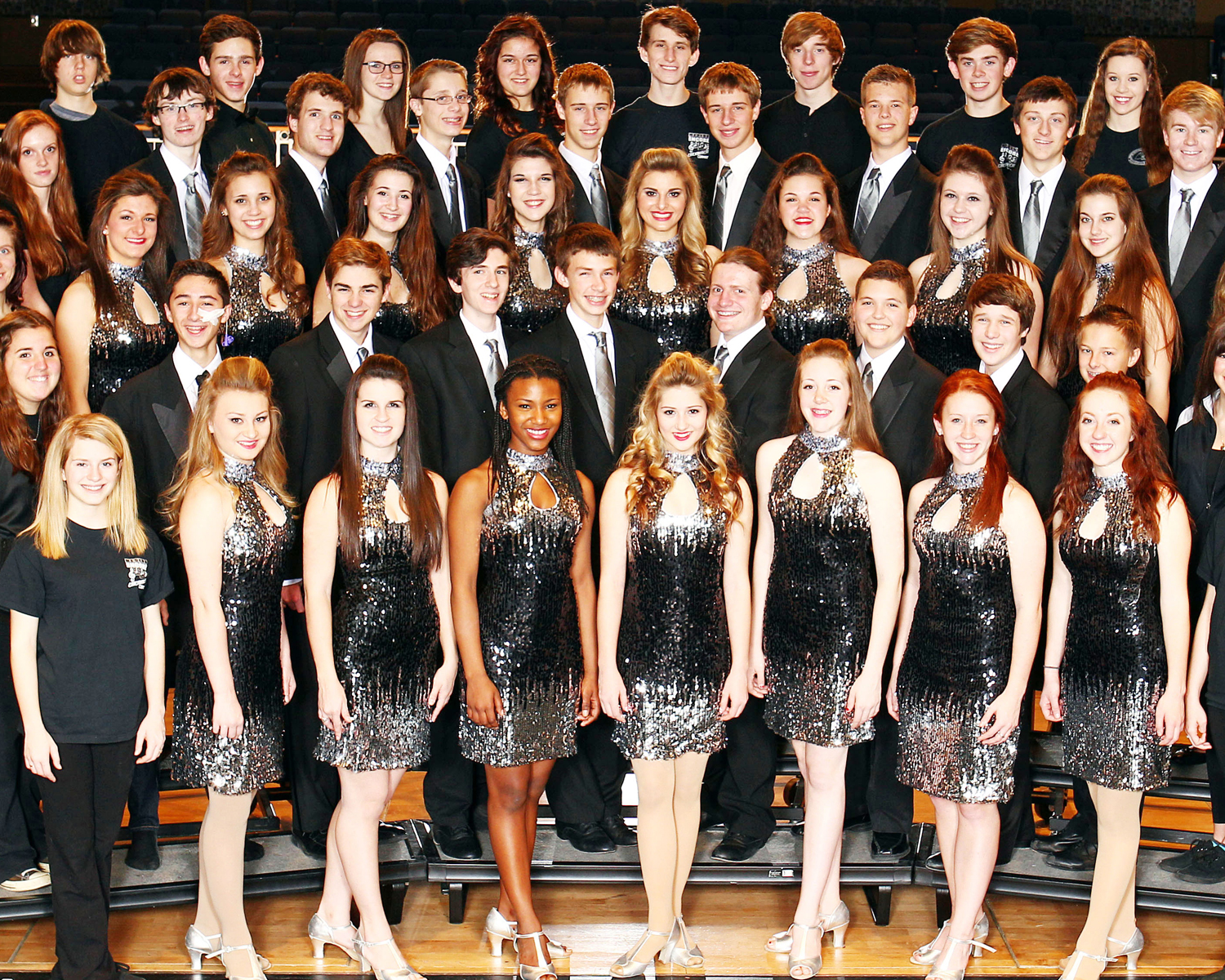 Share
Share this:
Digital
PDF
Issue
The Encore Entertainment Company is a competitive show choir that represents Medina High School in Ohio, consistently ranking as a top finalist at show choir competitions across the Midwest.

Made up of 46 singers and dancers from grades 9-12, The Medina Encore Entertainment Company also sponsors the hugely popular Medina Midwest Showcase, where high school and middle school show choirs perform in a full-day competition. Encore director Tyler Skidmore said the showcase has become a premier venue for groups from all over Ohio and West Virginia, and he’s been thrilled to bring a high quality competition to the Northeast Ohio area.

Oksana Klue, a senior and dance captain, explains that Tyler Skidmore is not “your typical, cookie-cutter director that will come into rehearsal with an exact and definite plan.” Instead, Skidmore has a general idea of what he plans to accomplish and how they will go about meeting those objectives. Klue adds, “As one of his students, I can honestly say you never know quite what you’re doing each rehearsal.”

Another quality about Skidmore that Klue admires is that while he obviously cares about the program and the success of the choir, he also cares deeply about every member of the choir and crew. She adds, “He has so much passion for music, and we’re lucky to have him willing to go the extra mile and push us to get better.” Though the stories he shares in practice may go places they never expected, students love them. In fact, the stories with surprising twists are part of Skidmore’s charm and humor. “Basically,” Klue finishes, “with Skidmore you expect the unexpected.”

Katie Peyton is a show-choir alum and a first-year assistant director of the show choir. Peyton notes that much of what makes Encore unique is their “collaborative style.” She believes this community spirit is, in part, a result of the assistants being alumni from the group which creates a very close, tight-knit family dynamic. “We all work together on the set designs and our costumes,” she adds.

She also praises Skidmore’s passion for making sure that kids are all getting the “artistic feedback” they need but that they are also solid on the “educational aspect” of everything they do. She believes Skidmore serves as such a powerful inspiration to the students he works with because there is “nothing he would not do for them.” The group is afterschool and on weekends, which is lucky for Katie-who has a fulltime job aside from her work with the group and her work with costume design. For Skidmore, though, this means his show choir work doesn’t even start until his workday has ended.

A choir does not end up with the impressive record Medina can claim without a drive to achieve and a desire to dominate competitions. However, being the best is not the only thing Encore cares about, even when actively competing. Skidmore notes, “This may sound corny, but we try to look out for other schools.” Even when the students are gearing up to do all they can to bring a win home at any given competition, they also want to “be kind and have a fun demeanor” in all of their interactions with other choirs. He adds, “Music is about having a good time ultimately.”

Moreover, Skidmore recognizes that a group does pick up on the personality of its director, and he knows he does “push them to win and go beyond what they think they are capable of.” Recently, though, he’s started looking at the big picture more. “At the end of the day,” he notes, “everybody is out there working hard.” Additionally, he realizes there are aspects of any competition that are completely out of a director’s control. “Some days you can go out and do your best show, and you’re not going to win,” he notes.

In focusing on “formative assessment,” he is able to stay attuned to the process, not just the end result. Just as student progress in academics can perhaps be better determined with pre-tests, check-ups, and daily assessments, so can show choir training. He is watching for “growth” and therefore focused on improvement.

Choir directors typically have rather vague contracts. In essence, the contract may simply note that as part of their teaching duties, a director will run a show choir. Within that very brief job description, directors clearly have a wide range of options for interpreting those duties. Some may play it safe and just replicate the ongoing program, and others may try to simplify expectations, particularly in a situation like this one at Medina-where the show choir does not have a daily class built into each and every day for practicing and honing their numbers.

Skidmore did not take either of the easier paths. Instead, he immediately challenged himself. Though he pushed forward with the competitive show choir angle to the music program when he joined the faculty a few years ago, he feels grateful he stepped into a program where the “culture was already there.” Rather than keeping the status quo alive, however, he decided to ramp up the program. He adds, “I wanted to go after areas where I need to grow.”

He’d only taught middle school before, so he knew he was entering this program with limited knowledge. Rather than letting that daunt him, he chose to push himself. He also wanted to make the group more “financially sustainable” while building a staff who would work closely with him on show concepts. For the last four years, he’s been involved with Show Choir Camps of America, where he’s also learned a remarkable amount about show choir in a relatively short time.

Skidmore knows he’s been lucky, and he thinks the tenacity to push ahead on a program that was so time-consuming and ambitious was likely a result of both “optimism and foolishness.” At a time when some music jobs were being ripped from his district’s budget, he was nearly finished with his master’s degree and thus started the tenure process immediately. Many in this position would likely take a safe route, not pushing for more but just keeping a program afloat. However, Skidmore realized that a music program, particularly in this day and age, must be financially viable to last long-term. Further, Skidmore recognized that learning would come in part in his willingness to make mistakes. He adds, “It’s all about the adventure.”

He knew he needed to “preserve the show choir,” so they made the difficult decision to add a rather hefty “pay to participate” fee of around $330.

Though he does believe the “price tag” may have dissuaded some children from joining the group at the time, he recognizes the fee was likely what “saved the show choir.” As soon as the program could generate money through fundraising and other avenues, they were quickly able to reduce the participation fee to less than half of that amount. Throughout this process, Skidmore also worked to ensure there were costuming scholarships made available for students who had talent and drive yet lacked the cash to participate.

Even in the wake of a district forced to cut teaching jobs, they had this incredibly beautiful 1200-seat auditorium that had been built in 2003. Rather than letting that space go to waste, Skidmore also pushed for another new program: a competition hosted by the school. His resolve was rewarded, as the Medina Midwest Showcase has been successful beyond all expectations.

Skidmore notes they have been filling up every year, leaving many choirs on the waiting list. Though he acknowledges the amount of work is ambitious, he sees that the Showcase is a “highlight of the year” for his students. They also have a chance to practice the kind, supportive personas from their competitions. As hosts, they make absolutely sure their guests feel supported and comfortable throughout the experience. In fact, they call this service attitude the “Disney Model” in that they want to be unfailingly polite, helpful, and upbeat.

Skidmore also wants the experience for students and their directors to have a full “educational component” as they watch videos of their performances for critique sessions. From elaborate LED light shows and dropping trophies from the ceiling in an awe-inspiring display, Skidmore makes sure the event is unforgettable for his students and their guests. “Preparation helps with that,” he adds.

Skidmore also shares how honored he is that schools spend their time and money to participate, helping to make the Medina Midwest Showcase so successful each year. Knowing firsthand how every cent in a music program is precious, he is immensely grateful choirs choose to keep coming back to the Midwest Showcase year after year. Appreciative and grateful, Skidmore concludes, “It’s a humbling thing to be chosen.”

Where It All Began: Los Alamitos Sound FX