Where It All Began: Los Alamitos Sound FX 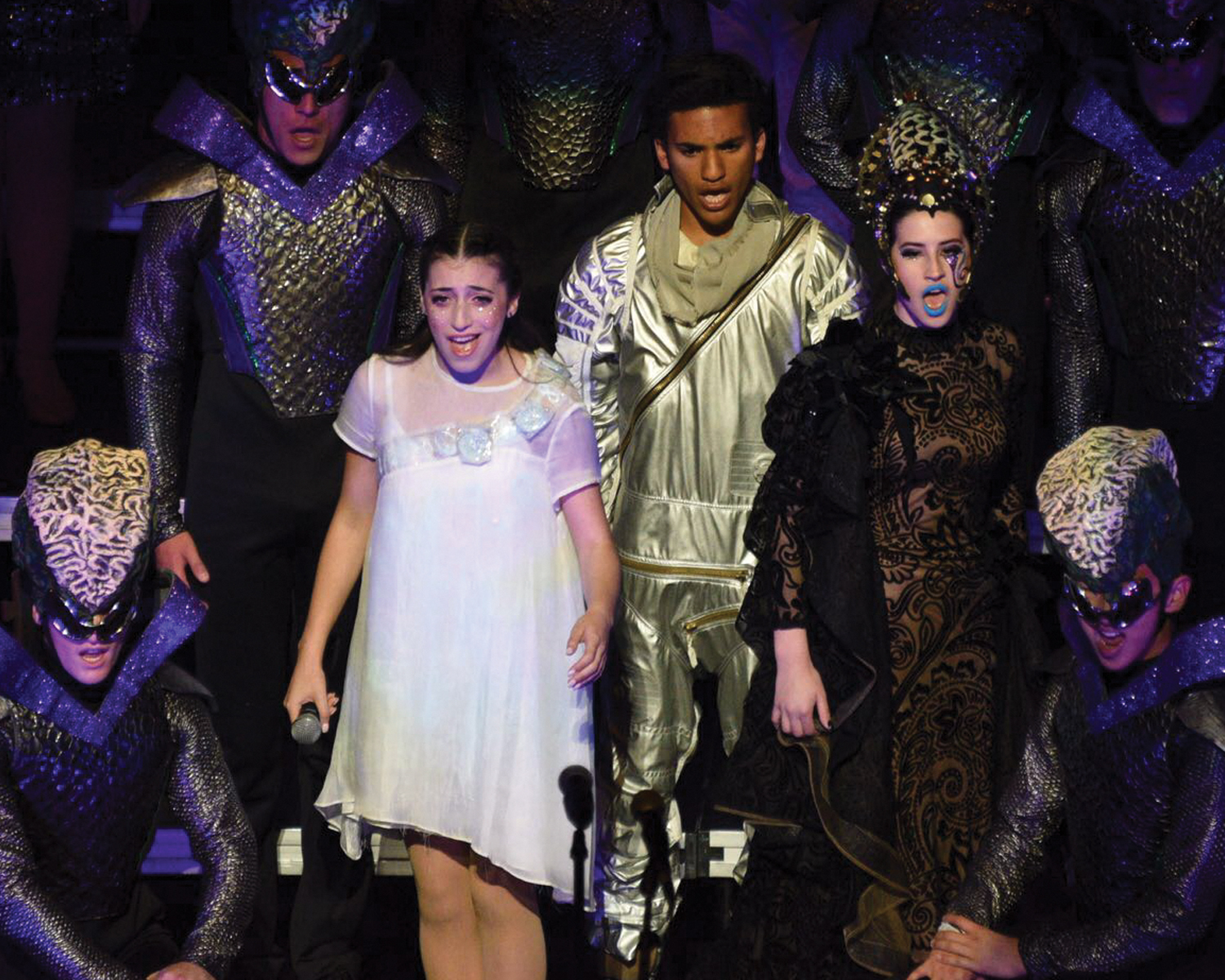 Share
Share this:
Digital
PDF
Issue
If you had told me thirty years ago when I was a member of Sound FX at Los Alamitos High School that I would still be working with the choir today, I never would have believed you. However, I have been a choreographer, assistant director and show designer for the Los Alamitos High School choir program since 1987.

Since then, I have worked with four choir directors, choreographed and designed hundreds of shows, and taught thousands of students. Though I traveled as a performer in national tours and Broadway musicals, after having a baby while on the road with Beauty and the Beast, I returned to my roots in Los Alamitos to raise my daughter Jenna and work full-time with the choir program.

The Early Roots of a National Champion

In the 1980’s there were very few choir programs in California where they sang and danced. Our director at the time, Ralph Opacic, wanted us to be like The Young Americans, so we took off the long chiffon dresses and brown tuxes, put on jeans and brightly colored t-shirts and started performing high energy medleys with athletic and complex dance elements. In the beginning, Los Al was not a competitive choir. We focused mostly on four large-themed production shows each year on campus that started to attract a huge following. When Dr. Randi Carp took over as choral director in 1992, she wanted to get involved in the show choir competition circuit, so we started to compete locally and we soon figured out that although we had amazing talent, there were a lot of technical elements we needed to add to our shows in order to be competitive with the other groups in the area. In 2008, Dr. Carp left, so the district set out to find a replacement for her. The program had grown significantly, so we wanted someone that could take us to the next level.

Gail Hart from Hart High School suggested that we meet a successful director from Sullivan, Illinois, named David Moellenkamp; she thought he was a perfect match for our school. After interviewing several candidates, it was clear that he was the right man for the job. I could tell right away that our styles would complement each other well and that he would do amazing things for our program. Taking over an established program from such a beloved director could have been a very challenging and difficult task for anyone. David stepped in with energy and contagious enthusiasm that won over the kids immediately. Thus began a new era of show choir at Los Alamitos High School.

A Director Unlike Any Other

David Moellenkamp is unlike any director I have ever encountered. His ability to motivate and engage a group of students is extraordinary in that he is able to get them to work at very high levels and accomplish things they never thought they could do. In addition to teaching his students to take ownership of their material and take personal responsibility for the success of their group, he set high expectations for each student regardless of which group they are in or their level of experience. He makes every student feel important, like a vital part of the team.

From the beginning, he established a mentorship program to bridge the gap between existing members in the advanced groups with the incoming members. The older students teach the new kids the ways of the group and how to be successful in the program, not only as performers but in the social aspects of the choir as well. He has created a family atmosphere where each student has a place to call home in a school with over 3,200 students.

Because David is constantly recruiting students to the program, you will often find him outside the classroom introducing himself to students and encouraging them to come see a show and participate in the program. Several times a year, he works with the elementary and junior high music programs, developing personal connections with the kids. Every student knows Mr. Moellenkamp; he is like a celebrity on campus. Once a year, he has all of the boys in the district perform a combined number in our annual choral festival. This year, we had over 300 boys from ages 7 to 18 singing and dancing together, and the bonds these boys form inspire the younger kids to stay involved in the music program. They learn that choir isn’t just for kids who don’t play sports; they see that choir is the cool place to be.

Over the years, our artistic staff has expanded to fit the needs of our rapidly growing program. To accommodate our 600-plus students, we have a full-time accompanist, a full-time second director, an administrative assistant, an arranger and several choreographers. Additionally, it takes an army of parent volunteers to organize thousands of costumes, travel arrangements and all the tech elements involved in our shows. We are fortunate to have an amazing booster club that provides us with support and fundraising opportunities for the students and their families, so that everyone can participate in the program. Our biggest fundraiser of the year is Xtravaganza, which is one of the largest regional choir competitions in the country.

Much of our success is due to the creative genius of April James and her inventive and groundbreaking choreography. April is always open to new ideas and suggestions, and she brings positive energy and excitement to the rehearsal process. April takes the time to get to know each and every student, and she genuinely cares about them as people, they are not just X’s and O’s on a blocking chart. Her commitment and dedication to our program, along with her imaginative and original choreography, have helped us establish a reputation for unique and memorable award-winning performances.

She also has an uncanny ability to remember every single student’s name. Similarly, our arranger, Josh Greene, is a musical prodigy. He can take a song that you would never think a choir would sing and turn it into a choral masterpiece. Sometimes he will suggest a song like “Smells Like Teen Spirit,” “Spaceman” or “Lazereto,” and we will say to him, “There is no way you can make that work.” Then, Josh shows up with a brilliant arrangement, and we are all grateful that we trusted him.

Even when surrounded by creative geniuses, passionate group members, and supportive parents, it is a difficult process coming up with new and cutting-edge ideas and concepts for six shows a year. We start planning our competition sets in advance in the spring for our six competitive groups. As we spend countless hours over the summer researching themes, rearranging storylines and designing the sets and costumes for each show, it truly is a team effort involving an enormous amount of research, text messages and emails. We come up with some of our best ideas while driving in the car or sometimes in the middle of the night! Though it can be frustrating, we love this part of the process. This is what makes show choir exciting and alive-it is an ever-changing and always evolving art form.

In October and December, we present Broadway and holiday concerts featuring all 600 students from seven periods of choir, performing medleys from different musicals and movies. Not only do I get to use my Broadway training to teach different styles of choreography and also incorporate acting, but our students also have an opportunity to directly interact with industry professionals that we invite to set. In late spring, we have started a tradition of producing a full-scale Broadway musical with our zero period concert choir and school orchestra. This past year we did Les Miserables with over 200 students.

My close friends Sarah Uriarte-Berry and Michael Berry, who were both stars in the Broadway production, volunteered to help direct. We performed to a sold-out crowd of 2,500 people, and it was a spectacular evening. Even more impressive is that the students had learned the entire show in just three weeks after returning home from winning Fame Nationals in Chicago.

Like most show choirs, once competition season begins we spend our weekends from February to May packing our truck and traveling around the country competing. In the warm-up room, David always says that he doesn’t care what place they come in; he just wants them to do their best and leave everything on the stage.What matters most is that they do their job and that they are supportive and encouraging to other groups. Years from now, the audience won’t remember who won; they will remember how the performance made them feel.

On a personal level, my life in show choir has now come full-circle. My daughter, Jenna Lea Rosen, has been a member and soloist in Sound FX for the past two years. It has been a surreal and wonderful experience watching her sing and dance on the same stage where I once performed. Proudly, I watched as she brought home six best soloist awards this year, including three at national championships. While these last few years with Jenna have been particularly special, I have stayed at Los Alamitos High School for so long because it is part of the history of who I am. I can feel the memories of past students and friends around me when I am there, which gives me great comfort and peace. We get to make a positive difference in the world, one kid at a time.

About the Author
Heather Hoppus has been a show choir choreographer and show designer at Los Alamitos High School for over 30 years. She has worked extensively on Broadway, in national tours and on film and television as a singer, dancer, actress and casting director.