by ProSound and Stage Lighting 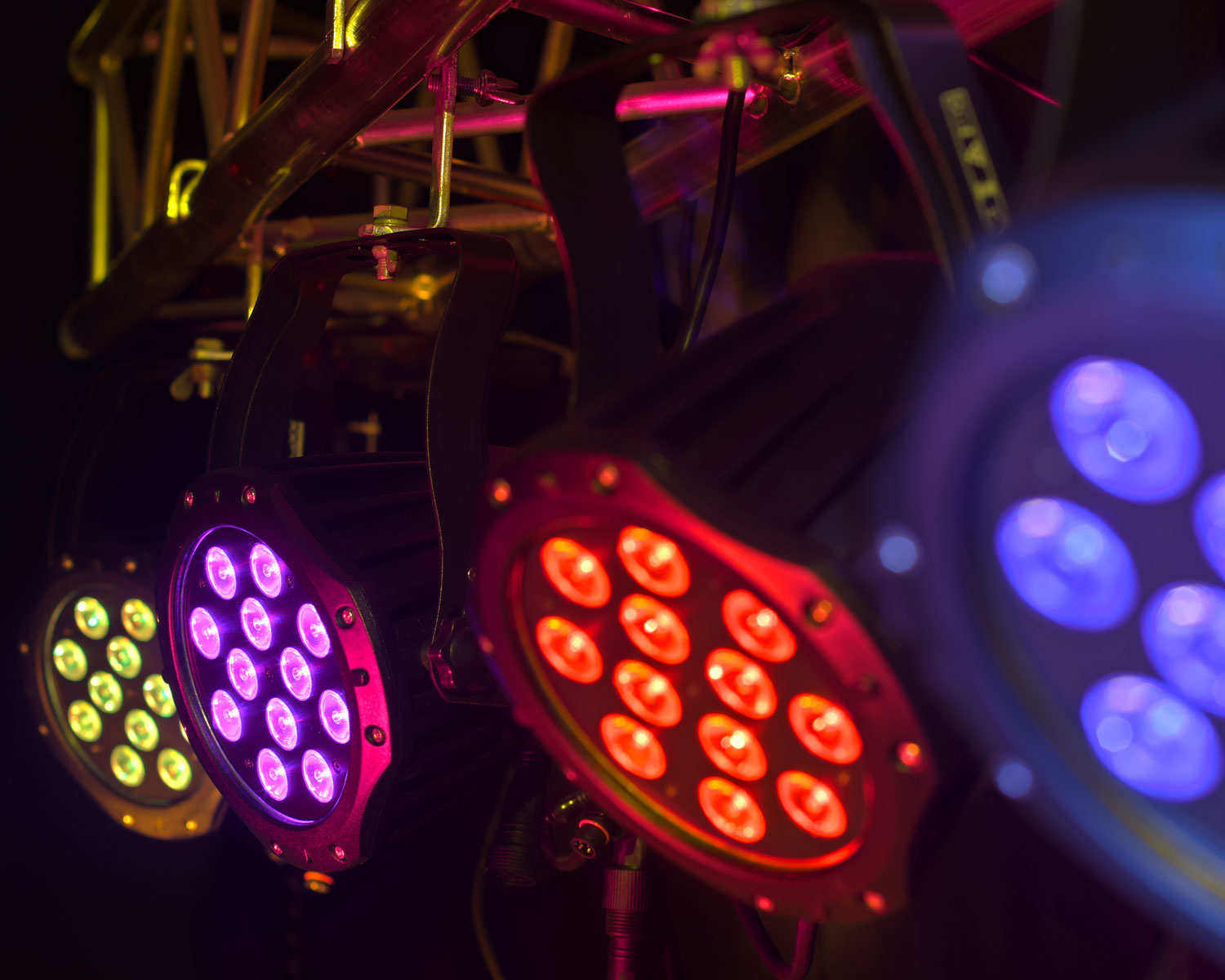 Share
Share this:
Digital
PDF
Issue
Light emitting diodes, or LEDs, have been around for the last fifty years but only became a viable lighting source in entertainment lighting in recent years.

The first commercially available LEDs combined three base elements (gallium, arsenic, and phosphorus) to produce a dim red light when an electric current was passed through. It was not until the 1980’s that the evolution of LED technology took off at a furious pace. Today, LEDs find uses in a variety of applications and seriously challenge the incandescent and discharge lamps that have been the mainstay of stage lighting. They not only offer the opportunity to create effects that could not be produced with lamps but are eco-friendlier than their traditional lighting counterparts.

LEDs offer a number of huge advantages over traditional light sources. First are their well-publicized long life, and the luxury of color mixing to create any shade or hue in the spectrum by typically mixing red, green and blue or red, green, blue and white. With RGB mixing, over 16 million colors can be created. With RGBW mixing, the number of possible colors is in the billions. This kind of flexibility used to only be available to lighting professionals using very expensive, high-power, intelligent fixtures. Without the need to replace lamps or gels, maintenance of an LED-fitted fixture is by far easier.

Another big plus of LEDs is the ability to generate light without much extraneous heat. As anyone who has ever been on stage underneath a few dozen PAR cans would attest, the heat generated by halogen and discharge lamps can raise ambient temperatures over 150 F (80 C). This doesn’t happen with LEDs. Casings and lenses remain cooler to the touch even after hours of use.

LED-fitted fixtures can therefore be moved sooner after being powered down, a huge plus for mobile applications. And you stay pretty cool under the lights, even at close range. Moreover, LED-fitted lights draw very little power in comparison to traditional fixtures. While a standard 20-amp circuit will only be able to accommodate four 500-watt PAR fixtures, the same circuit can power over 35 CHAUVET COLORado 1 wash lights, for example, as each draws only 51 watts while offering a comparable output. Low power consumption allows DJs to use more fixtures on a single circuit and reduce their carbon footprint at the same time. And because LED-fitted fixtures weigh less, taking additional effects to a gig is a lightweight proposition.

Beyond the Marketing Fanfare

The popularity of LEDs and the world of new possibilities they open are not immune to exaggerations and confusing marketing statements. First, not all LEDs are created equal and wattage is not the primary indicator of an LED’s output. The output, or brightness, of an LED is measured in lumens and depends on the drive current, its origin and the temperature. Intensity of LEDs of the same wattage varies, from manufacturer to manufacturer, from bin to bin. To keep fixtures in the same line fairly constant in their output, reputable manufacturers typically buy LEDs in a narrow range of neighboring bins. If not, you will see quite a difference in the light output of units within the same line. Using multiple LEDs in each fixture also helps reduce variations in output from one fixture to another in the same family.

Another possibly confusing statement is the familiar claim that LEDs last tens of thousands of hours, with up to 100,000 hours being often cited as the average life. This statement is not false but keep in mind that w hile LEDs do not “fail” and come to a sudden death as conventional bulbs, over time, their output tends to decrease. Also, their intensity lessens with increases in temperature. At 2120 F (100 0C), for example, you will generally see an average of 45% decrease in the intensity of a red LED, a 13% decrease in green and a 17% decrease in blue compared to the output of those same LEDs at 770F (250C). Of course, because of the variations in today’s LEDs, these percentages are approximate and can vary from LED line to LED line. The bottom line, however, is, if you want your LEDs to last, keep them cool.

And check that your fixture is properly built to dissipate heat. Another misconception about LED-fitted fixtures is that they are all capable of color mixing. You should not assume that an RGB light is an RGB mixing light.

Overall, however, you’d be hard pressed to make a case against the use of LEDs when it comes to mobile applications. From portability to savings in power and the ability to run multiple units off one circuit, from the originality of new and eco-friendlier effects to the flexibility of color mixing (when available), LEDs open a world of creative possibilities in ways that we could only dream of before.

What is an LED?

LED stands for Light Emitting Diode. Unlike incandescent lamp, an LED generates very little heat because it doesn’t have a filament that requires heat in order to glow. Instead, LEDs produce light by way of the forward-biased movement of electrons in a semi-conductor material that releases photons (A photon is the smallest amount of electromagnetic radiations, usually in reference to the visible light range, and it behaves like both a particle and a wave.)

What is RGB Color Mixing?

RGB stands for red, green and blue, the three main diode colors used to create millions of other colors. We all remember mixing colors as kids to get new shades. When we download Jpeg images, we are also looking at the result of color mixing. Similarly, television and computer monitors use pixels to change and mix colors and create the images that you see. In LEDs, mixing red, green and blue to varying degrees allows endless color combinations for a wide variety of applications.

Go green  and save some green: LEDs do not consume a lot of power. They are much more eco-friendlier than traditional lamps. In general, you can link dozens of units in just one single circuit.

No worry about fragile bulbs and lamp changes: LEDs last much longer than traditional bulbs-usually between 50,000 to 100,000 hours.

No need for gels: LEDs offer a myriad of color possibilities without the need to use gels, as in traditional PAR cans.

Longer life span: LEDs last between 50,000 and 100,000 hours compared to just thousands of hours in a quality discharge lamp

No duty cycle: Because they generate very little heat, well-built LED fixtures are less prone to overheating, eliminating the need for duty cycles.

About the Authors
ProSound and Stage Lighting (PSSL or PSSL.com as we have become to be known) has grown to one of the largest and most respected sources of professional audio and lighting equipment in the United States. We are Professionals who leverage the latest technologies in sound and lighting to deliver increased speech intelligibility and music fidelity, energy/ electricity savings and unlimited color options thru LED sourced lighting, and excitement to any visual or audio application since 1976.
Read more from the authors
Share
Share this:
Digital
PDF
Issue
More in Lighting

When Upgrading Performance Space, Don't Leave Your Lighting In The Dark