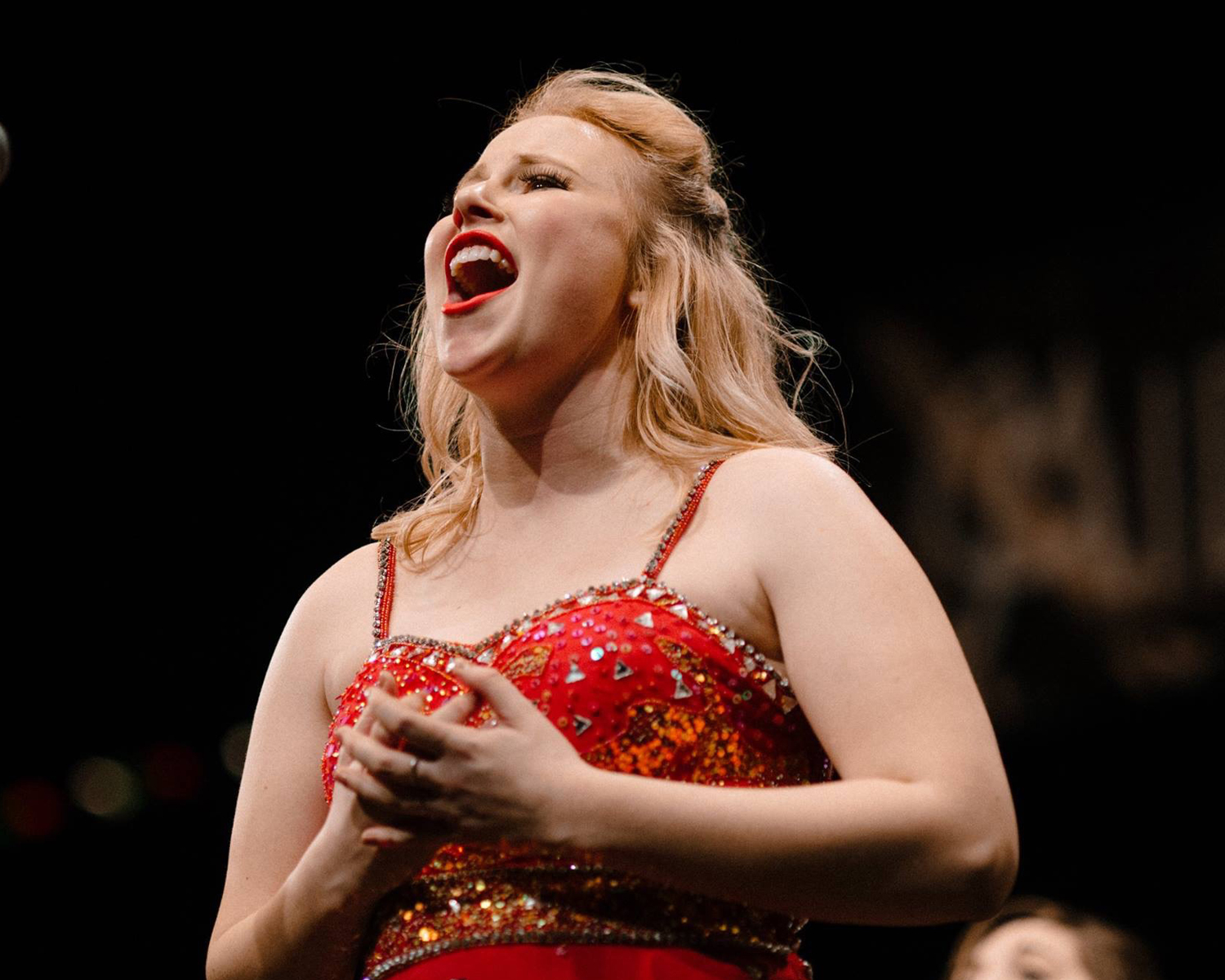 Share
Share this:
Digital
PDF
Issue
Let me start by saying my parents forced me to join show choir in the eighth grade.

I loved singing and dancing-“Hannah Montana” was my favorite show at the time-but the idea of doing jazz squares with jazz hands in dorky costumes did not sound like fun to me. I did end up attending the first informational meeting; the group wasn’t auditioned, so 73 other eighth graders at the meeting and I officially signed up for Watts. My story doesn’t really follow a past, present, and future format, so we’ll stick with Past-Past, Past, and Present, Looking into the Future.

I had no idea at the time that the program I had just entered had a long reputation of excellence and high achievement. My hometown of Ankeny, IA, went from one high school to two the year after I graduated, so things are a little different now. But back then there was a non-auditioned, eighth-grade ensemble, an auditioned ninth-grade ensemble, and then at the high school there was the varsity, mixed prep, and single gender prep. In any ensemble you’ll hear talk of “family,” but there’s another level of “family” when you’ve all been in the same ensemble on and off for five years.

Eventually, I did figure out the expectations that came with carrying the Ankeny name at competitions and even within each ensemble-to be the best. There was a lot of competition to have solos and get blocked on center or the floor; while I was fortunate enough to have a few solos during my time at Ankeny, I was not as #blessed with blocking. My junior year I was blocked off stage as a swing during the opener and then farther and farther back once I actually made it on stage. I’m not going to lie-I cried about it.

However, we ended up being undefeated that year, so it all felt worth it. And all the hard work (by soloists, dance captains, and back-row buddies alike) that had culminated over the course of the previous four years had paid off senior year. We worked extremely hard, and I swear to you, I didn’t take a single rehearsal for granted. Regardless of where I was blocked, I was determined to give my best and love every second of it, because it meant a lot to be in the varsity group.

That was the culture. We had a rough patch at the beginning of the season-painful losses, missing first place by mere points, judges’ placement averages that defy logic-but fortunately we were able to pull out a grand championship at FAME in Orlando and then second runner-up at FAME Nationals, behind two performing arts schools from California. I mean…come on, we were good!

I didn’t go right into my undergrad after graduating high school. Alan Menken was a huge idol of mine, and I had originally wanted to study music composition. I wanted to be Alan Menken. For non -Disney geeks, Menken is the composer behind the music of Beauty and the Beast, The Little Mermaid, Aladdin, and so many more. I wanted to write and use music to move and inspire my audiences. Unfortunately, the one school I applied for waitlisted me, so I was not able to pursue that in the way I had planned; and I ended up staying home for a year, but it was in that year I had a front-row seat to my siblings starting their journey in their own “show choir family.”

It was then that I realized how much people need that feeling of connection and teamwork in their lives, especially when they have grown accustomed to all the emotional benefits that are part of being in a show choir family.

Joining Big Red Singers at the University of Nebraska-Lincoln was a culture shock. It is similar to how you are raised by the values of your parents, but then you experience people with varied value systems when you go away to college. Like families, different programs have different values. Further, my central Iowan show choir values and experiences were totally different from my new Nebraskan “family.”

Being in rehearsal with so many different show choir cultures was one of the most life-altering learning experiences that I’ve ever had, and it’s where I understood the difference between good values, bad values, and no values.

As of right now, there are no competing collegiate show choirs, so the motivation to be great, or even good in any capacity, isn’t always there. As a junior in high school in the back row, knowing no one would even see me, I still gave my all at every rehearsal because that was the expectation: that was what my family valued. I joined BRS at a time where the performers assumed that any show choir consisting of older performers-in this case, college-aged versus high-school aged-was automatically more talented; unfortunately, that was not necessarily the case.

I made several attempts to bring new ideas to the group. If this ensemble was truly attracting the best of the best from all over, then why weren’t we using our resources to be innovative, push the envelope, and be an ensemble that all high schoolers could be inspired by? I was met with reminders that we were in Nebraska and questions about what I was trying to “do to this group.” What I wanted didn’t fit into the culture of BRS, and I realized that all show choir is not the same, and one person alone (especially if that person isn’t in charge) cannot carry the values for the group.

I don’t mean to negate all the good that came out of my time in the Big Red Singers. Some of the more negative experiences, ironically, were some of the best learning tools-and that is the case for anyone in show choir. I gained friends that I will cherish for the rest of my life, people who continue to inspire and push me: and I am very happy to say that BRS is now a thriving and very successful ensemble. But my time as a performer was coming to a close, and it was time for me to step into the role of a director.

My senior year, no longer in BRS, I found my love of teaching. I didn’t become Alan Menken, but I was starting to see the same light in the eyes that I had-as a 6 year-old listening to the soundtrack of Aladdin and a 17 year-old winning first place at FAME-in my students, as they grew over the course of my time student teaching. My frustration over the complacency in BRS was cured by the budding curiosity and desire to grow displayed by these students, taking my expectations, my values, and my culture with stride and effectively renewing the love I have for show choir and what it meant to me. Students give back as much to their directors as directors can give to their students.

Present, Looking Into the Future

Flashing forward a bit, I moved to Oklahoma- yes, the same Oklahoma that’s been in the news for a 10-day teacher strike. I am starting my first year of teaching at Oliver Middle School in Broken Arrow, and while the state doesn’t have the best reputation for its schools, the fine arts program at Broken Arrow has certainly made a name for itself with the Pride Broken Arrow marching band having more than a few successful seasons competing at Bands of America. Tiger Rhythm, the varsity show choir, is only a few years old but already creating waves by placing first at UNL’s Midwest Cup this last season. There is a district -wide devotion to success and a high standard of excellence.

Another reason I was so motivated to move all the way down here was that there wouldn’t be anyone to tell me, “This is Oklahoma”- meaning, they wouldn’t say that Oklahoma does show choir a certain way, and my way didn’t fit. Show choir still isn’t a household activity in the area, so there are not many competing values.

No one will be asking me, “What are you trying to do to this group?” This program is only a few years old, so no outstanding culture has been cemented; so far I have had nothing but support in my ambitions. I’m bringing in a choreographer that I hope raises the bar for my surrounding schools and districts that have show choirs. There is already one ensemble in my school, but I have plans to add a second.

Lessons from A Back-Row Baroness

As a back-row baroness myself, I don’t like the idea of leaving middle school show choir auditions to the select few students who can already dance and sing. I want to give all students the opportunity to learn and grow, and especially to those who wouldn’t have made it otherwise. I want to cultivate a program that values and includes all members of all skill levels. Some of the best teachers and motivators I had as a middle schooler and high schooler were those kids I saw every day in rehearsal.

Many first-year teachers get their first job already planning where they want to move after a few years. I made a vow to myself not to think about when I can get out, but instead how I can set this program up for success year after year. How can I give my students the same culture, the same values, the same family that I had at their age? I want to see my students develop the values of their show choir “family,” as they progress through the program.

About the Author
Hannah Johnson has long been part of show choir-as a performer with an award-winning, nationally recognized show choir in Ankeny, Iowa, and then a member of the college-based Big Red Singers in Nebraska. Hannah just started her first year at Oliver Middle School in Broken Arrow, Oklahoma.
Read more from this author
Share
Share this:
Digital
PDF
Issue
More in Camps, Clinics & Competitions

The Role of Competition Within a Music Program