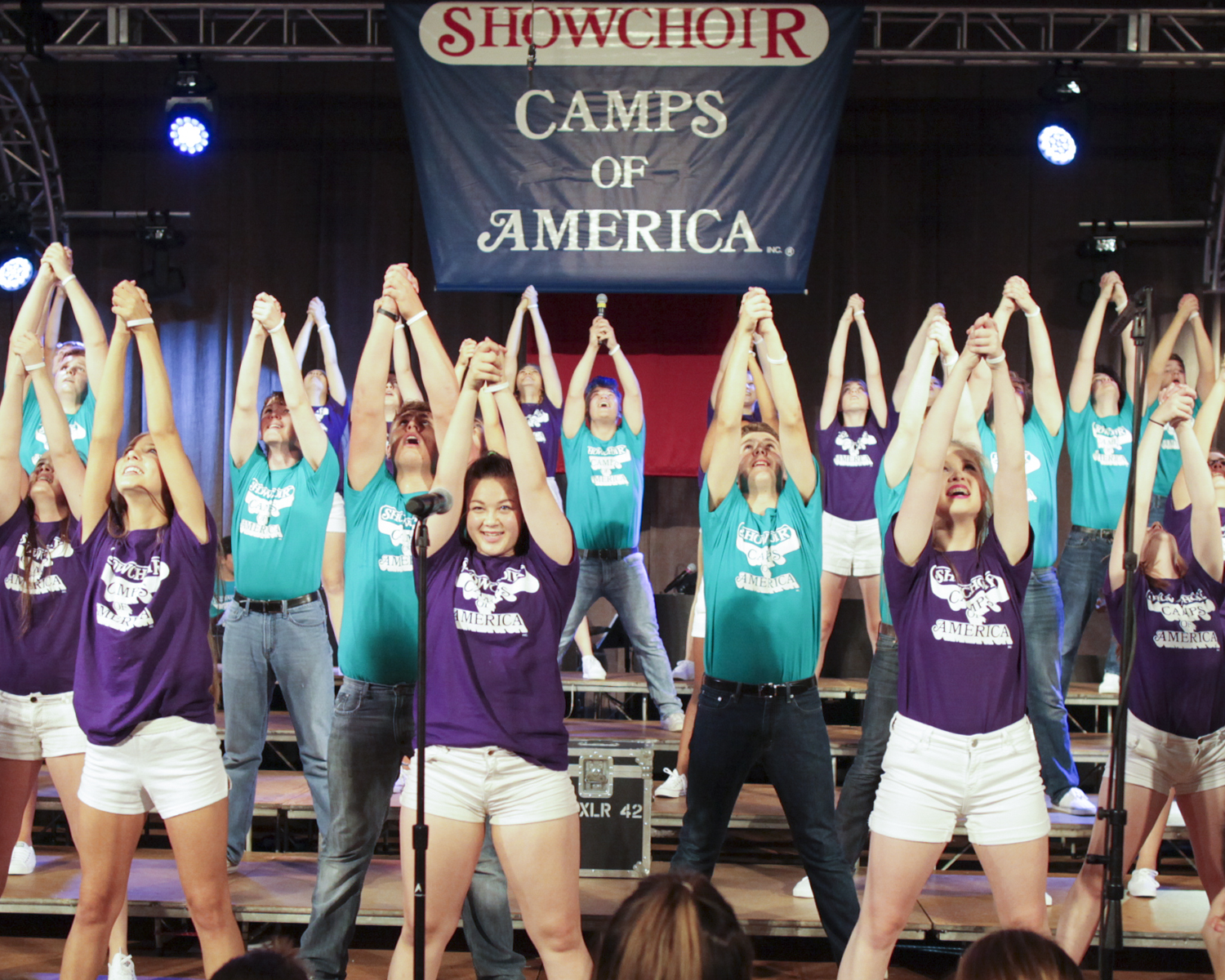 Share
Share this:
Digital
PDF
Issue
Based upon what I learned from my interviews conducted with both professionals and students at SCA, they make SCA sound like the most positive experience any performer could hope to have, while also consequentially sweating their perm out!

In having the privilege to discuss Showchoir Camps of America experiences with numerous counselors and students at SCA, I discovered that the overwhelming consensus is that SCA is unique, enriching, and demanding (in all the right ways). These are times that teachers, counselors, and students genuinely cherish.

A Supportive, Challenging, and Creative Environment

Camp counselor Paige Balbilla described SCA as being packed to the brim with good vibes and dedication. Staff and students alike encourage one another to push their potential and become stronger singers, dancers, and generally strive to put on the best show possible. Student Paige Miller had a similar experience; she shared, “The atmosphere is full of love and support from everyone in attendance. The counselors are always so helpful and talented, and the teachers are so kind.”

In addition to dedication and hard work, support is a consistent theme mentioned by both students and counselors alike. Students like Miller elaborate on how palpable the support is, and how she felt equally comfortable among both her peers and instructors. Cameron Weiler, a teacher at the camp, really emphasized how organized and friendly every aspect of SCA is for the camp-goers. In fact, I have never spoken to so many people who all reported such an overwhelming amount of positivity from a summer camp experience.

Weiler shared that the counselors at SCA receive incredible access to workshops and resources designed for performing art professionals. Many of the people I spoke with praised the camp for their common practice of bringing in top-notch, well-respected professionals —some even of celebrity status—from across the country to lead workshops for teachers and students.

The Benefit of Challenging Rehearsals

To say these camp-goers work hard would be an egregious understatement. Dan McKee, SCA counselor, explained that those involved will practice for eight hours a day, and prepare—from scratch— to perform a twenty-minute showchoir set at the end of the week. Weiler further explained that the teachers also participate in their own showcase to perform for the students, saying, “This is an awesome reminder of what we are asking from our students in rehearsal.” It sounded as though everyone would be leaving practice with sore legs but wide smiles.

All that said, all work and no play makes Jack a dull dancer, so SCA also promotes the fact that everyone is surrounded by immensely talented, kind, creative, like-minded people. This environment is designed to both challenge and inspire all camp participants. As Danny McKee, SCA camp counselor, said, “Being surrounded by nearly 700 peers from all over the country puts each student in a position to learn from others and make new, potentially lifelong friends.”

Mark Myers, a current doctoral student in music education who has done everything from be a camper, to counselor, to painist, to teacher, mirrored this sentiment and explained he is forever grateful for the colleagues mentors, and friends he gained; these bons are truly more familial than professional.

Jennifer Gulsvig, both a former camper and current staff at SCA, explained how critical her experiences with SCA were to her life, largely through the relationships—especially friendships—she developed over the Photo by years at camp. Professionally speaking, Gulsvig states, “The teachers and clinicians who are at this camp are some of the most influential teachers, and give everything they have into their programs,” and she concluded her thoughts by saying she is infinitely grateful for the colleagues and mentors she gained because of SCA.

Gulsvig believes that her involvement has ultimately turned her into a better educator. Weiler shared a similar sentiment, stating that he has learned new tools and techniques for how to shape his students into better musicians. Additionally, throughout this experience, he can bring them together as a more cohesive group.

It was mentioned by multiple people, including counselors McKee and Balbilla, that time management was critical during camp; after camp was over, this skill has extended into many other aspects of their life. Additionally, other traits like responsibility, accountability, compassion, dedication, and leadership are all valued and promoted at camp.

Similarly, Gulsvig stated she learned to never stop growing and learning, and this is largely due to her experiences with SCA. Weiler, another educator, also notes incredible improvements, both in himself and his students. In describing his students after their experiences at SCA, he adds that they are not just more skilled in their singing and dancing, “but also in their attitude toward rehearsal and performance.” Weiler explains, “I am lucky to send students to this camp each summer, because I see endless payback in the school year.”

That said, this is not an experience that is exclusive to the staff at SCA. High school student Miller explained that by attending the camp, she learned to reach out to others, and she is no longer “afraid to put myself out there.” Current counselors, like Gulsvig and Myers—for instance—were both campers before they became staff, and it was clear that the positive payback from SCA started early in their camp-going experiences.

While interviewing students and teachers associated with Showchoir Camps of America, I quickly realized that this two-week camp is far more than just something young performers can slap on their résumé. SCA offers a once-in-a-lifetime experience, allowing aspiring and practicing performing arts professionals an opportunity to gain vital experience, networking, insight, and deep, lasting relationships.