How Show Choir Staging Impacts Storytelling: Reading Between the Risers 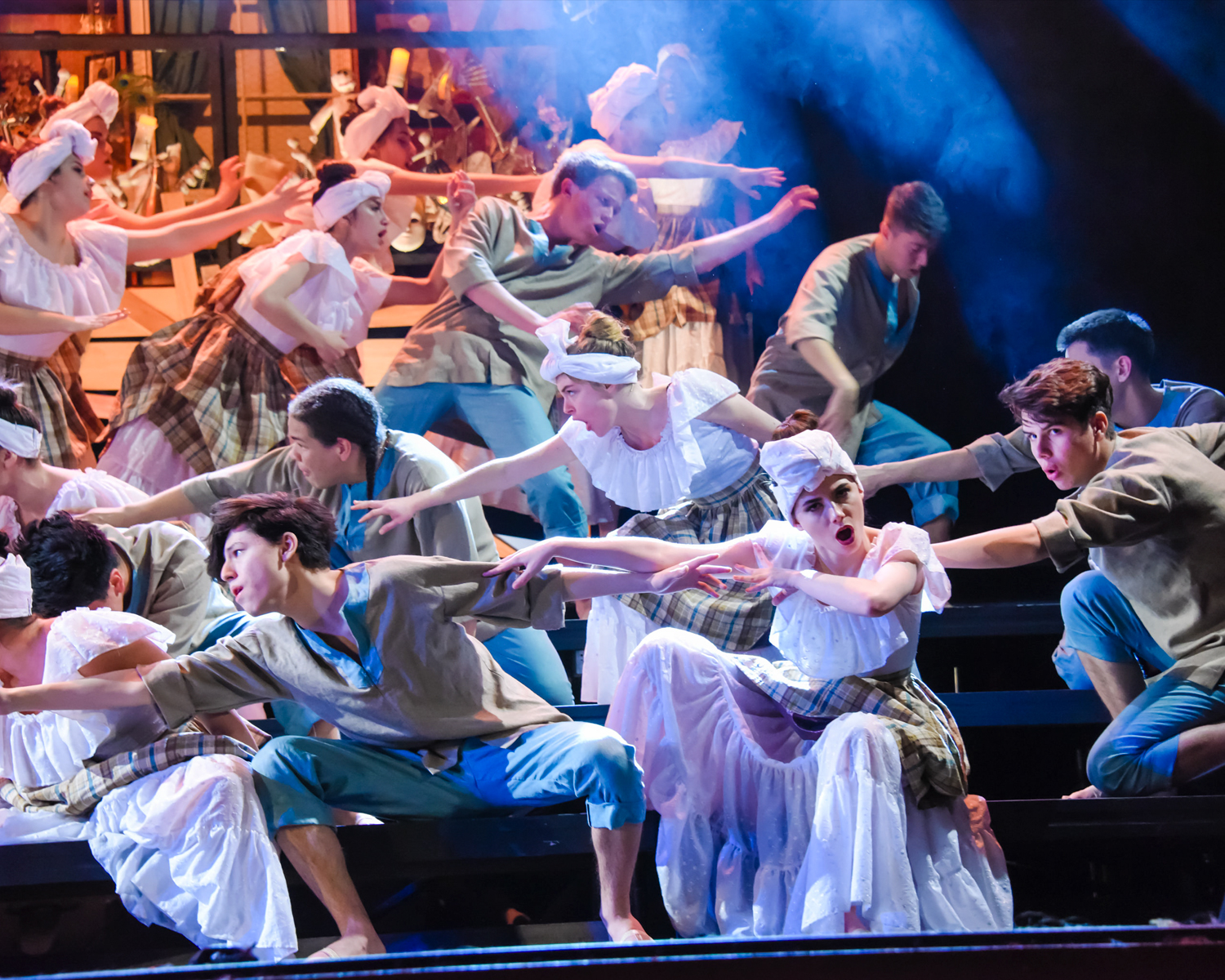 Share
Share this:
Digital
PDF
Issue
When we think about show choir, many keywords are likely to pop into our heads: glitz, showmanship, production, and sequins. Less commonly, someone may associate show choir with words such as dark and political.

Having a Base of Energy and Creativity

When creating a show, many players can either actively or passively influence the outcome of a production. In the case of Powerhouse, Artistic Director Jen Oundjian is one of the strongest assets at John Burroughs. According to Director Brendan Jennings, Oundjian is one of the most creative people he personally knows in the field.

Oundjian has a passion for bringing historical realness to her productions; her goal is to honor the people who once lived in the era and earnestly portray their experiences. Additionally, in a less direct fashion, students also contribute to the influence of a show.

In general, each set of students will come with their own set of collective ambitions; for instance, some years the students are more zesty and cheerful, others are deeply competitive and driven by a desire for success. In regards to Powerhouse’s 2019 competition group, the students were artists first and foremost—they were willing to take on a dark, stirring topic that may have been seen as too controversial for other groups.

As Jennings noted, one of the reasons he loves working with high school students is the raw energy they bring to the world. Across his classes, his students are consistently eager to learn, try new things, and embrace the type of dedication required to be a part of Powerhouse.

When developing the theme for their 2019 competition piece, originally Oundjian and Jennings planned on covering a story about the origins of Voodoo. However, in her research, Oundjian learned about the history of Haiti’s slavery rebellion of the late 17th century.

The Haitian Revolution was the first—and only—successful slave uprising to date. After some heavy consideration, the two directors decided the best way to honor this part of history was to depict it as accurately as show choir permits. Oundjian prides herself on developing historically appropriate costume and sets, within the confines of what is expected of theatrical, musical productions.

John Burroughs is a multicultural school, comprised mostly of Caucasian, Latino, and mixed-race students; African Americans are a small minority at the school, and there were currently no Haitian students involved in the performance.

Jennings noted that some of the students voiced feeling a little uncomfortable, because they were fearful of wrongly appropriating someone else’s culture. Though Oundjian and Jennings had already made several efforts to be as respectful as possible to the history and heritage of Haiti, they listened to their students’ concerns.

In turn, they had a Powerhouse alum and their mother come to one of the practices one day to teach the team more about Haitian culture. The mother and former student were thrilled with the show and were impressed by Powerhouse’s depiction of this major aspect of history.

How to Use Staging to Enhance the Story

In the opening sequence, though the Priestess does not perform directly with the rest of the group, the directors still wanted her on stage, visible, and faintly participating in the number.

The team wanted to create a sense of economic and power divide between the Priestess and the rest of the performers. In order to portray this message, they built a two-story tower for her to reside in during the opening number.

They used staging and blocking to further the theme of inequality in the story.

Not every venue is going to allow for such extravagant props—in all honesty, some venues don’t even have enough space to fit all the students. Jennings and Powerhouse travel, not just for competitions, but also private events.

When entering a new space, Jennings may or may not be given accurate specs and capabilities of a space until he and students arrive. In these instances, they must adapt staging and blocking virtually instantly. John Burroughs makes a concerted effort to train their students to be able to perform professionally and adapt to circumstances quickly.

The reality is that many venues do not realize how much prep is required for a production, and some clients expect performers to be able to perform in any setting. Albeit irksome, those who work in entertainment have learned this about the culture; this is why Jennings and Oundjian strive to teach their students to practice a duality of professionalism and craft dedication.

Notes from the Expert

When considering a set design, it is easy to get swept away by either an idea or an aspiration, and it can be difficult to balance themes, finances, and capabilities, all while trying to create a show that is competition-ready. Jennings provided some insights on what the difference is between a good and bad design. A bad show, in short, rests heavily on gimmicks.

For instance, when making song selections, it is not uncommon for directors to become too heavy-handed in their messaging. Perhaps the song’s lyrics fit the era or overt message, but the covert messages and character arc are muddled.

The question directors should always consider when designing a show is this: “How does this progress the story?” Jennings explains that the music, set, costumes, and mood should work in unison to create a cohesive story, without altering the motivations of the character. Similarly, some schools become too fixated on choosing songs that are new or popular, but don’t perpetuate any greater message.

Novelty is a powerful tool and should be used with intention. On the other hand, a good design will give the audience enough room to make their own decisions about the point of a production. As a general rule, audiences would prefer to make their own assumptions than be spoon-fed a message. Exceptional designs will use all elements of a production to impact the audience emotionally though subtle nuance.

Elevating The Stage for an All-Inclusive Experience

Dressing Up the Stage