A Single Sound Solution for Many Acoustical Needs at Assumption College 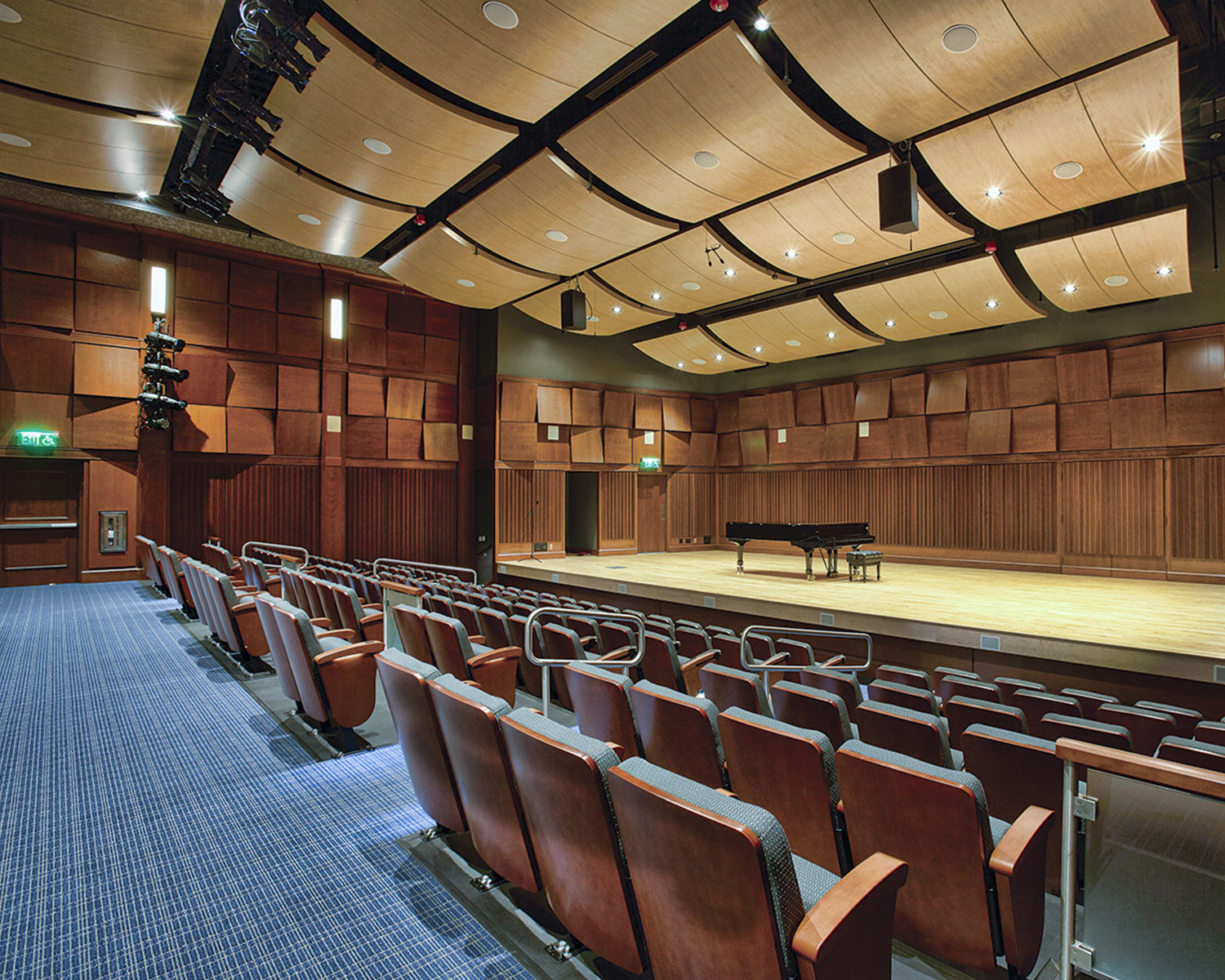 Share
Share this:
Digital
PDF
Issue
The new Curtis Performance Hall at the Tsotsis Academic Center at Assumption College in Worcester, Massachusetts, was built to serve many needs. Class lectures, theatrical performances, choir concerts and movie showings all happen at the hall. And those many needs require vastly different acoustics. To determine the right sound solution, the school leadership partnered with acousticians, architects, consultants and sound experts. They set out to determine how to create the best-sounding, best-looking space to accommodate the various needs of the students.

Solution for Singers and Speakers

Choral Director Michelle Graveline wanted a hall where her choir could shine. However, the auditorium would be a multipurpose space used for both choral performances and lectures.
“Spoken word is at the low end of reverberation time and choral performance is at the high end of reverberation,” explains Alex Bagnall, acoustician with Cavanaugh Tocci Associates, the acoustical consultants on the project.
“Early on, they asked about adjustability. We explored using drapes, but the room wasn’t big enough to achieve a reverberation time that would be appropriate for choral music. That’s when the idea of electronically enhanced acoustics unfolded,” he says.
In order to hear what that solution could sound like, Bagnall suggested they visit another school where a virtual system was installed. It was time for a field trip.

Hear It to Believe It

When it comes to technology, sometimes you need to experience it to fully understand the possibilities.
“We were trying to explain our active acoustic solutions, which include a system of microphones and speakers that help project sound among musicians and into the audience,” explains Ron Freiheit, Director of Acoustics at Wenger Corporation. “We knew they needed to hear it to really understand it.”
They invited Graveline and her team to Wartburg College in Iowa, where Wenger’s Transcend™ Active Acoustic System is installed at Neumann Auditorium.
“What’s great about Transcend is that it gives facility managers the ability to enhance acoustic environments in virtually any space: performing arts centers, auditoriums, theatres, opera houses, arenas and worship spaces,” says Freiheit. “It’s high-performance, but it’s also an affordable solution with great flexibility.”
Flexibility includes presets to accommodate everything from a small concert setting to a medium-sized lecture hall to a large chapel simulation. Each preset is customizable and can be changed between uses with the touch of a few buttons.
“Going to Wartburg definitely helped,” Bagnall says. “The classical music crowd has an inherent distrust of all things electronic. They needed to hear that those enhancements can be subtle. It was very helpful for them to come out and really understand how it works.”

Created to be Customized

Bagnall and his fellow acoustician, Kent McKelvie, worked with Wenger’s acoustic team to determine how many speakers and microphones the space would need, and where to position them. They opted for two microphones and 60 speakers placed strategically throughout the auditorium. They chose six presets for each of the most common needs in the space: lecture hall, small recital, medium recital, small hall setting, large hall setting and chapel. These settings were all customized for their programs.
“We worked with the architects to get the sound absorption distributed properly so the system could work with the room,” McKelvie explains. “Now it looks and sounds good.”
“Most schools can’t afford to have a different venue for every different acoustical need so a system like this can satisfy everyone,” Freiheit says.
As a bonus, they were able to tap into the existing surround sound system in the auditorium. They use this mode when viewing movies for a more immersive sound.

Not far from the auditorium stands the only dedicated rehearsal space for the college’s music program. At 36-feet wide by 34-feet deep (11 m x 10.4 m), the space was more of a classroom than a rehearsal room. An 11-foot (3.4 m) high ceiling meant very little room for reverberation or volume of any kind. The small rehearsal room needed a sound reboot of its own to create a usable space for Jazz, choir, community band and additional rehearsals.
Wenger’s Virtual Acoustic Environment (VAE) Rehearsal system fit the bill. Similar to Transcend, VAE® Rehearsal technology uses highly advanced digital signal processing to simulate nine different environments, all within the same rehearsal room. It’s customizable, allows record and playback capabilities and lets the instructor change from one environment to another with the touch of a button.
“Musicians refine their skills more efficiently in the rehearsal room when they can realistically hear what they will sound like in the actual performance space,” Freiheit says.

Back at the Curtis Performance Hall, the final Transcend tuning stages involved bringing in different music sources, like a singer and a violinist, and adjusting the presets. And after the various performers have had a chance to use it and get used to it, there’s usually one last visit.
“We typically let the customer use it and then go back in six months and see if anything needs to be tweaked. It takes time to get a sense of what it truly is,” Freiheit says.
“Ideally, the casual visitor isn’t aware that there’s an acoustic system in the auditorium,” McKelvie says. “We just want them to think that everything they heard during the performance was amazing.”

About the Author
Wenger Corporation.
www.wengercorp.com
Read more from this author
Share
Share this:
Digital
PDF
Issue
More Articles for You

Choreographing for the Future: My Experience with the Fairfield Show Choirs

Fundraising on a Major Scale