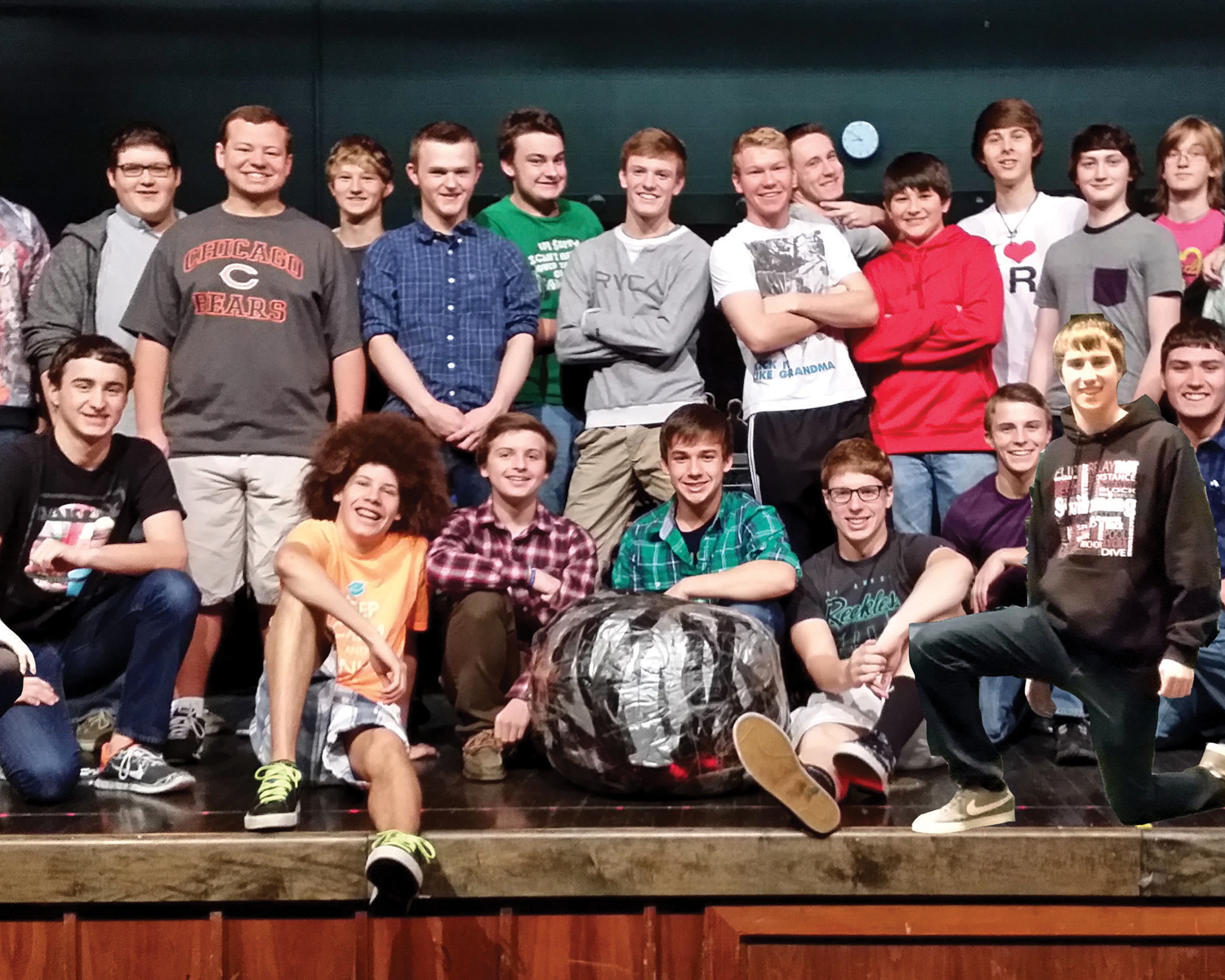 Share
Share this:
Digital
PDF
Issue
Classic Connection is an outstanding show choir from DeKalb High School in Waterloo, Indiana, that has been competing for over 26 years under Director Shelley Johnson and can boast choreographers such as Dwight Jordan and Eric Hall.

Though they are quick to tell you there’s no hierarchy in a traditional sense, so that their leadership is shared among group members, senior Bruce Bell is one of the unofficial spokespersons for promoting their agenda. Bell notes that the idea for this group originated from some observations he made at competitions, when he noticed that many males in the group weren’t “as focused and dedicated” as he knew they could be; he also believed that the young men from the choir were fracturing into sometimes contentious cliques at the competitions.

Kahler Goldsmith, a junior who has been with Classic Connection for three years, shares some upsetting memories from his freshman year, when he felt that-even outside of competitions- some people were being “terrible to each other.” He and some other men from the group decided something had to be done, and he credits Bruce with first acknowledging their group effort and labeling them “Skinny Bois.”

Basically, Bell wanted to find a way for the young men in the group “to connect to each other.” He also wanted a way to encourage males who wouldn’t ordinarily spend time with one another outside of their practices to start socializing outside of that one shared interest. Now, he says, it’s “amazing how much love comes from the group.” He dubbed the group Skinny Bois, though group members come in all shapes and sizes, and they developed a clear group objective: focus on brotherhood and unity, rather than dominance and competition. Even more importantly, perhaps, they wanted to set a good example for underclassman, to ensure the future of the group was on solid emotional ground.

Chris Smock, now a senior, has been a Classic Connection member for four years. Smock had no prior music or dance classes before joining Classic Connection, so everything was new to him. Though he always felt close to everyone in his show choir family, he notes that they have faced “rocky times like any group of friends does.” Smock says the 2013-14 year exceeded even his greatest expectations for the show choir and the Skinny Bois group. Smock shares, “Bruce creating the ‘Skinny Bois’ has brought us to great lengths as a family as well as a show choir.”

Smock also cites the Skinny Bois “constitution,” which outlines the expectations for each group member. Those qualities include giving their best in every rehearsal, demonstrating respect for their director, showing respect for all of their competitors at every competition throughout the season, and “accepting and loving every member of our show choir family.”

They are also focused on performing at their best level for “ourselves, our audience, for Shelley, and for Tabby Meade.” A member of Classic Connection and Sound Sensation for three years, Tabby Meade passed away of a sudden illness last year. Smock shares, “Losing a member of a family as close as Classic Connection was unbearably hard. But we knew what we had to do and it brought us even closer.”

Smock notes, “I believe this year is truly a legendary year for Classic Connection and the Skinny Bois. There is just something there inside all of us-almost like a fire that keeps growing, fueling our ambition to get better and better every day turning into something great.”

Brandon Park adds that The Skinny Bois stand for togetherness. Though he acknowledges that the desire to win is certainly there for all of them, he says they focus on fun; he also believes the efforts of the Skinny Bois group have helped them find a way to “incorporate fun and a winning season.” In fact, he thinks the group works because “every single man in this group gives 100% all the time.”

Noting that some choirs at competitions are either too focused on the fierceness of the competitions or, conversely, only “mess around,” Park suggests the Skinny Bois help the show choir members incorporate competition and companionship by “sharing the emotional sensation that comes from winning competitions.” He concludes, “For most people, it takes years to understand the importance of accepting everyone. All of us have been able to [realize the importance of acceptance], while only in high school, through the Skinny Bois.”

Kahler Goldsmith shares, “To me the Skinny Bois is very important, not only for myself but for the newer guys. I was always a choir guy, but I had always leaned more towards the sports side instead, so coming into the group was scary and different for me. And I remember what it felt like, feeling out of place almost as if I didn’t belong.” Goldsmith credits the Skinny Bois for helping new male members, or even established members, feel fully connected to the group.

Though he echoes Park that remembering to have fun with the shows is their primary focus, Goldsmith adds, “Of course with fun, there is also respect and dedication that goes along with it.” He shares that respecting their director and staying completely focused in rehearsals are their two major rules. He also knows they have to “live up to this reputation we’re building ourselves.” Because the group keeps a list of goals, instead of just listing obvious objectives related to competition season, they also let that list reflect their humor by adding lines such as, “Survive the Christmas show.”

As President of DeKalb Classic Connection, Grant Lockwood shares that The Skinny Bois is “a way for the male members of DeKalb Classic Connection to become a closer group of friends and to make sure everyone feels welcome.” Noting how these intense friendships and sense of community help them when their practices go long and their bodies grow tired, Lockwood adds, “Other choirs should take notice of the equality and mutual respect we have for each other, which is something that I believe many other show choirs lack because of a lack of togetherness and community.”

Finally, sophomore Jack Bassett shares how the Skinny Bois group has helped shape him as an individual. He recalls the year before he joined Classic Connection, when he “witnessed the drama that destroyed an amazingly talented group.” He adds that there was a genuine fear about that environment being recreated, even while there was a desire from all choir members to become a close group. He looked to Bruce Bell as a role model, as the young man he believes “paved the way of creating an idea of closeness with The Skinny Bois.”

Bassett adds, “The Skinny Bois aren’t just some quirky, goofy, fun show choir boys. We’re a group that betters everyone. Friendships are mended or mending as we speak as a result.

Bonds are building between each other. A family is formed. It’s nice to know that for once in my life I have someone to turn to always.”

Choir Spotlight-Brett Carroll and In Sync: Leading By Example