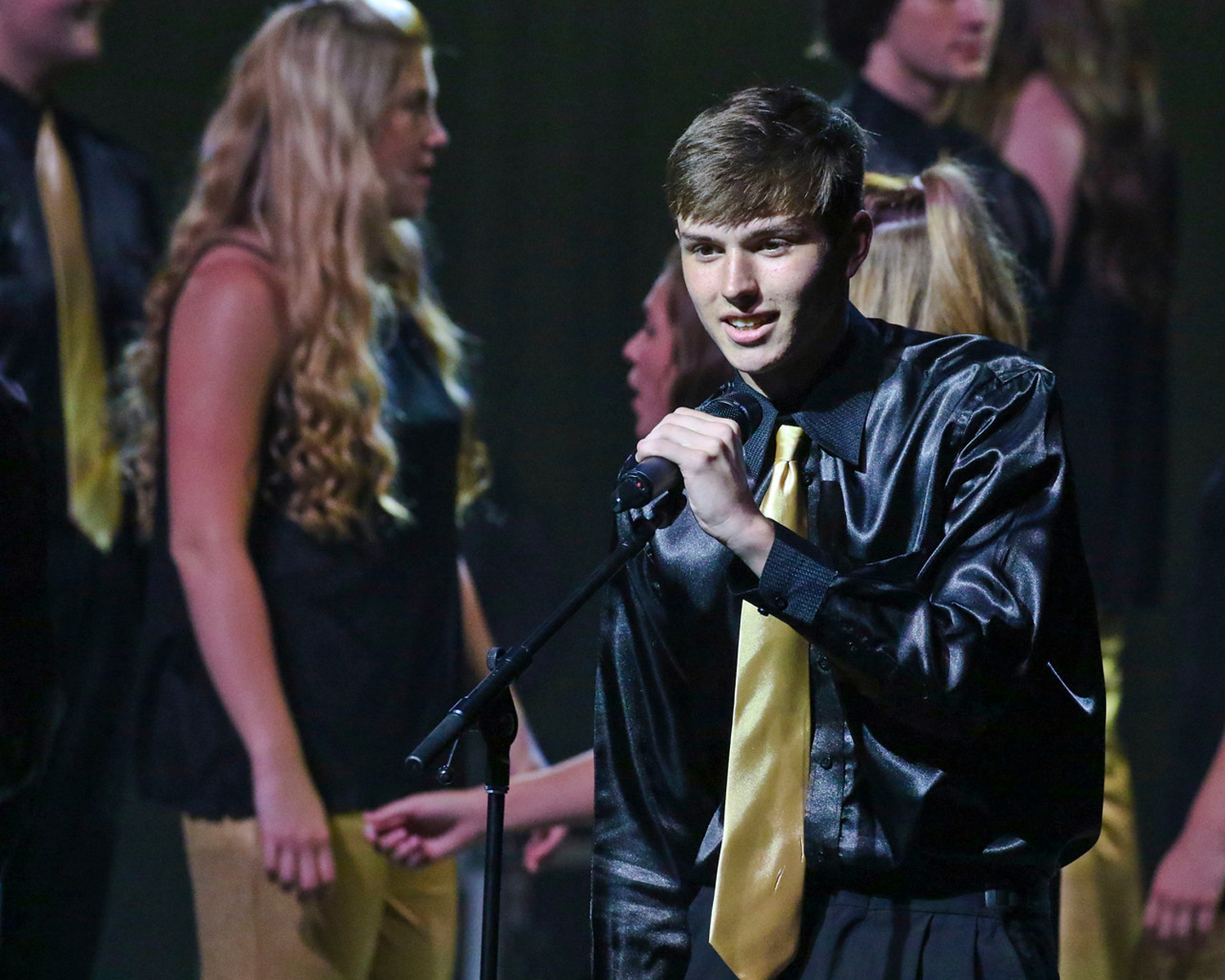 It’s an oppressively hot July morning in Alabama, and 17-year-old Jayce Thornton is up with the sun, getting in his workouts for the upcoming football season. By 9 a.m., he’ll head to his school’s auditorium for choreography and vocals, and by evening he’ll be on the field sweating it out with his teammates.

It’s a grueling schedule, but it’s the only way he can be a part of two activities that are each equally important to him. Jayce is a member of the Celebration Show Choir cast at Mars Hill Bible School. He’s also the kicker and a wide receiver for the football team. And he’s not alone.almost all of the 55 members of the Mars Hill show choir participate in multiple sports and other school-sponsored programs.

Mars Hill Bible School is a private K-12 school located in Florence, Alabama, a growing town nestled in the center of the Southern musical hub known as the Shoals. “There’s something magical about the Shoals,” said show choir director JJ Davenport. “Music is just engrained in the people here. These kids have a talent that is simply exceptional. All we’re doing is tapping into that.”

And tap into it they have. MHBS has a 9th-12th grade enrollment of 146, making it a 1A school, the smallest classification in Alabama’s system. When Mars Hill produced its first show choir program in the early fall of 2000, the school didn’t even have a football team. “The fall was the quietest time of year,” says Davenport with a laugh. “Not so much anymore.”

The show choir grew to be a wildly popular program, with almost 40% of 9th-12th grade students participating each year. So when the school added a varsity football program in the fall of 2013, leaders knew that their collaboration was key. “Everyone does everything around here,” Davenport said. “We knew that if all our programs were going to flourish, we were all going to have to work very closely together to make it happen.” Coaches, directors, and administrators juggle their collective schedules and trade off practices to make sure no organization is getting the short end of the proverbial stick.

For their part, the students recognize and value the collaborative effort that allows them to be a part of multiple programs. “Most of Mars Hill students are involved in just about everything that’s offered,” said four-year show choir member and cheerleader Emma Heupel. “It probably seems difficult trying to find a time where everyone can come and rehearse, but it’s not.everyone at Mars Hill seems to understand how big and truly amazing this show is.”

Now in its eighteenth year of producing a show choir, Mars Hill’s cast list is chock full of students who might not typically be seen on stage. From ball players to cheerleaders and from debate team members to academics, a spirit of inclusivity inhabits every element of the program. “These kids are getting the best of all worlds,” said head football coach Darrell Higgins. “When they’re learning discipline, perseverance, the power of teamwork. Those things carry over to their other activities and makes them better at everything they do. Those things will keep carrying over for the rest of their lives.”

Of primary importance to administrators is the idea that in the show choir program, as well as in the school as a whole, everyone belongs. “Mars Hill is truly a family that works together so students can thrive and explore multiple areas of interest,” said four-year cast member Abby Foust. “We all have different talents, but anybody can step right into show choir and be a part. The cooperation of my cheer, cross-country, and soccer coaches with my show choir directors has given me the opportunity to be involved in everything I could ever want to take part in.” Heupel agrees. “It’s a place where you can be who you really are, and have a moment to shine.”

The result? Mars Hill has developed an outstanding culture of cooperation, and the proof is in their collective success. The 125-minute 2018 show choir program included 25 songs, 13 costume changes, and brought in almost 800 attendees each night. “We don’t do competitions,” said Davenport. “We have to be finished before football starts so that we can support their efforts.” As for the football team.

At the time of publication, they’re boasting an undefeated season and are ranked #1 in their region. Clearly, the collaboration is working. “There’s a lot of behind-the-scenes work that goes into making this happen, but it’s worth every minute,” Davenport said. “The other programs’ successes are our successes, and our successes are theirs. Everyone wins here.”

About the Author
Lori Eastep is the Director of Marketing, Alumni, and Public Relations at Mars Hill Bible School. She is a second-generation MHBS alum and a current MHBS parent. Eastep holds a B.S. in Communications from the University of North Alabama.
Read more from this author
Share
Share this:
Digital
PDF
Issue
More in Show Choir Spotlight