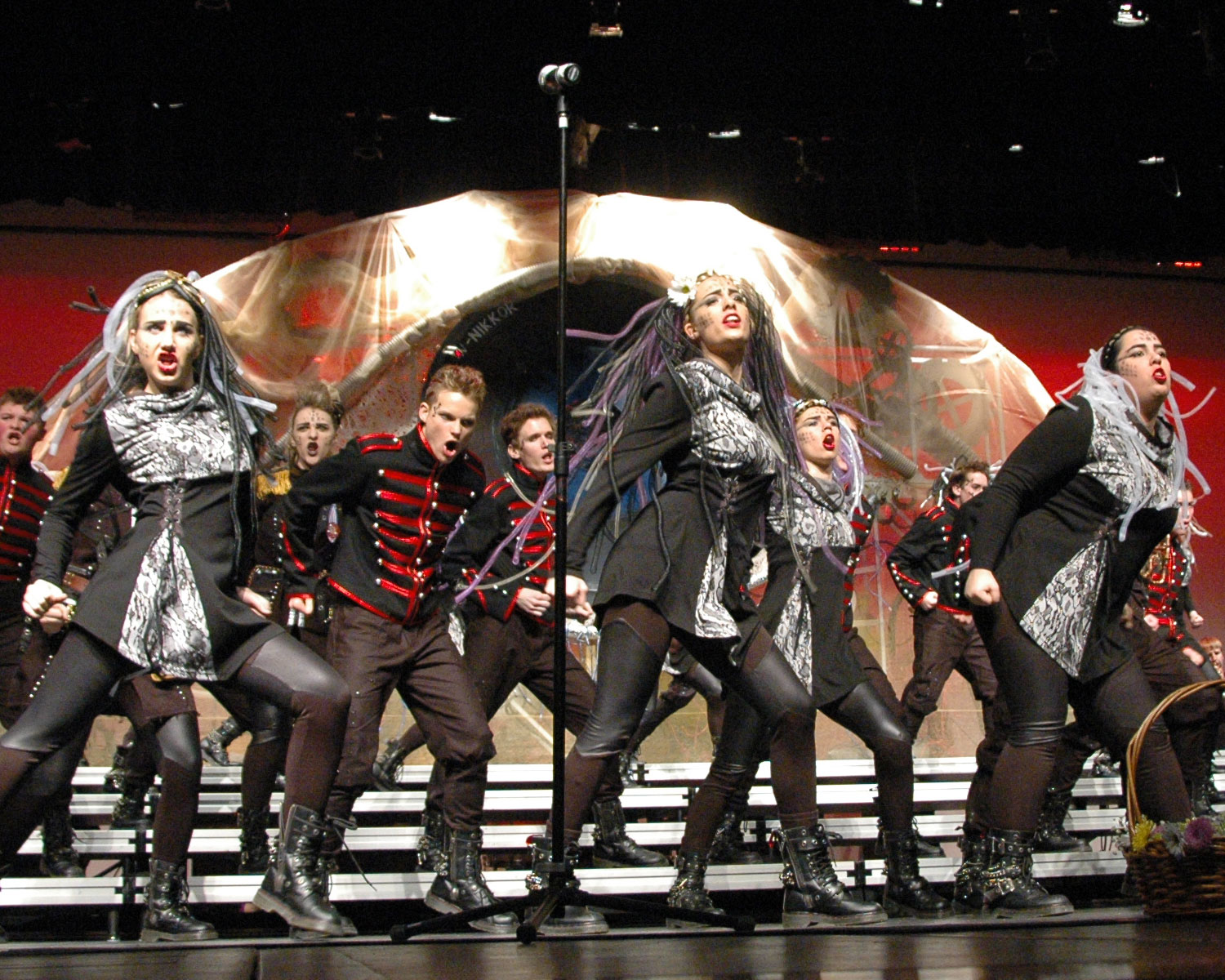 Share
Share this:
PDF
Issue
Revolution Director Pat Ribar shares that he has always loved music. Though in high school he started on the Varsity football team, played baseball, and wrestled, he also shared his musical talents in choir and by playing the piano.

In fifth grade, he added musical theater to that list of interests and activities. During his senior year, after football season had come to a close, a visiting choir director-from the college Ribar would ultimately attend- sparked Ribar’s interest in visiting the school. Ribar notes, “He was a brilliant choir director and musical theater director. He was the mentor that I needed and off I went.”

Interestingly, Ribar had no experience in show choir at his own high school because that director “didn’t believe in it.” College offered Ribar his first experiences with show choir, even though he notes that show choir at that time was more akin to swing choir. However, the college was very invested in musical theater, and Ribar says he “was totally hooked into it.” He recalls studying the director as he planned and rehearsed complicated musicals. He would try to guess the types of notes the director was likely to offer after rehearsal. He adds, “I knew then that I wanted to direct choir and musicals.”

After he completed his bachelor’s degree, Ribar taught at a junior high in Davenport, Iowa, which gave him an opportunity to direct. He notes, “Boy was I green! I mostly had fun with the kids but I drew on the college experience to make things work.” He also found additional work as a singing waiter for a Rock Island dinner theater, which gave him a chance to perform as part of the pre-show before the productions. Not only did that have some of the “show choir feel” that he would ultimately grow so familiar with, but he also gained confidence in his abilities.

After finishing his master’s degree and six years of teaching experience at the junior high level, he secured a teaching position at Omaha North High in 1992, which had a “struggling program that did not have a show choir,” though they did have a Madrigal Choir, which gave Ribar a chance to incorporate show choir and vocal jazz into the established curriculum. Even with the Concert Choir and Madrigal Choir, the school was “relying on the history of the program,” Ribar notes, rather than working toward what was currently so popular. Omaha had no major show choir program, other than Westside. Six year later, Ribar and his students were able to visit New York, see a Broadway show, and sing at Shea stadium. This was also Ribar’s first exposure to FAME, and he now fully recognized all of the possibilities; the very next year, they started a show choir and traveled to a competition.

In their first FAME competition, they placed 12th. More importantly, though, they saw what other schools and other show choirs were doing, and they became “eager to take on a bigger step.” In 2001, they returned to FAME and placed 2nd. They competed at FAME competitions several more times, and they even launched a major competition themselves: the Viking Cup. In 2005, he accepted a position at Gretna High School, taking over a small, but growing, choral program where students were eager to create a larger show choir, and they began competing multiple times every season, in addition to starting the PRIME TIME competition.

Ribar notes that there were some tremendous challenges in the beginning. At Omaha North, he was still a young teacher, and he was attempting to get those students to “buy in” to the program, using musical theater as the “hook” to grow the program and encourage younger students to learn for themselves the “joy of performing.”

Ribar notes that he is “in the memory business,” and one of his primary objectives is that his students leave high school with wonderful moments to recall about their experiences. He adds that his students “have the same values and idealist goals that every high school student does,” and he believes his job is to facilitate that process-that stage of their development-as best he can. “Their goals are my goals,” Ribar adds. He recognizes that each new school year can bring a young and inexperienced choir that has boundless opportunity to face challenges and grow. “I aim for joy in their hearts,” he shares, and to create music at an extraordinarily high level without ever losing sight of the pleasure of learning and performing.

Because he has “always felt that a choral program is a direct reflection of its director,” Ribar is conscious of the ethos he creates in the program, recognizing that he is setting up the attitudes for hard work and competition. “The environment for learning is the most critical piece to that puzzle,” he notes. “If a kid is stressed out, being manipulated, troubled, hungry, or not having any basic need met, they cannot learn.” Ultimately, he wants his students to learn, of course, but also to remember these positive moments for the rest of their lives.

Kelli Hayworth, the mother of a Revolution senior and another Revolution graduate, recalls that when they first transferred from another district, she immediately recognized “how much of a family” the group seemed to be. “There is so much involvement from parents,” Hayworth adds, “not because we feel it’s an obligation but because it is so exciting to be part of what Pat has created.”

Hayworth praises Ribar’s passion for music, his creativity, and his love for the kids he teaches. She notes that Ribar suggests he’s not necessarily a music teacher but someone who creates memories for his students, and she notes that truth is evident in all of Ribar’s work. She adds that he is an excellent teacher but that he also spends time to know each of his students, serving as a mentor to many of them, and offering his talents, his compassion, his charisma, and his energy.

As another Revolution parent and fan of Ribar’s work, Randy Jackson notes, “He makes the kids and the parents come together as a family and everyone works together for the good of the show and the kids.” Jackson also praises Ribar for his tireless work in teaching, coaching, and mentoring all of his students. While he notes that Ribar is certainly creating better performers, Jackson sees Ribar’s more important work as molding these students and preparing them for their futures, which will be filled with hard work and challenges before success. Jackson concludes, “He knows when to be the teacher and knows when to soften it up, a true gift for any person in the industry of helping and teaching kids.”

Assistant Superintendent and the parent of three show choir members, Rich Beran feels lucky that several of his sons have worked with Ribar, who has “that rare ability to put together a show that not only pushes the limits of his students, but is also fun.” Beran also sees the long-term influences on these students, as many pursue the arts in higher education after Ribar instills a love of music that lasts throughout his students’ lives.

Ribar admits that developing new show ideas can be the most difficult and stressful part of his job. In his planning, he seeks advice from others, but he also knows he must make hard choices for the sake of the best performance. Not surprisingly, considering his strong background in musical theater, he finds that his group usually does best with theatrical or Broadway-based shows. Last year, Josh Green gave Ribar the idea to base a show on Orwell’s 1984, helping Ribar develop the concept and arrangements. Joey Timmerman, one of Ribar’s co-workers, helped find musical selections and assisted in developing elaborate and comprehensive set and costuming ideas.

Ribar notes, “We wanted the show to make a statement about humanity and how technology is taking away our independence and polluting our view on simple things in life.” Initially, they wanted the show to be akin to a “Tone Poem,” but as they choreographed and developed each idea, the show ultimately became a “mini-musical.” Their goal was to pull in their audience with complex characters and concepts, allowing the audience to “draw their own conclusions” about the message. Though the parents needed some convincing at first, the students were immediately on board.

Parent Kelli Hayworth found the 1984 “Big Brother” show to be incredibly innovative and exciting. “Pat created a world for the kids to be part of,” she notes. “They told a story that left not a dry eye in the place.” With the kids leaving behind the traditional sequins to instead costume themselves in painted faces, “cyber locks in their hair,” chains, and leather boots, Hayworth adds they were taking a “path not traveled” that created one of those indelible memories that Ribar works to offer his students. Parent Randy Jackson also admires the risks that Ribar took in a “very conservative” culture, a risk that was wildly successful.

Rich Beran considers “Big Brother” unique and ahead of its time for the Midwest, continuously packing the venues when Gretna performed, with waves of students lauding the special and exciting work on stage being offered by Revolution. The show also earned Gretna an invitation to the Canadian Nationals.

Beran believes the best description of Ribar was offered from Gretna’s One Act Play director, Carole Carraher, who has won over twenty state championships for her work. When Carraher was asked to critique the “Big Brother” show, she wrote: “Pat Ribar is a genius. He creates masterpieces on the stage.”

About the Author
Rachel James Clevenger, M.Ed., Ph.D, is the Editor-in-Chief of Productions Magazine. After teaching middle school and high school for several years, she earned her doctorate in Composition and Rhetoric. For fifteen years, she taught and directed the Writing Center at University of Alabama at Birmingham and Birmingham Southern College.
Read more from this author
Share
Share this:
PDF
Issue
More in Show Choir Spotlight