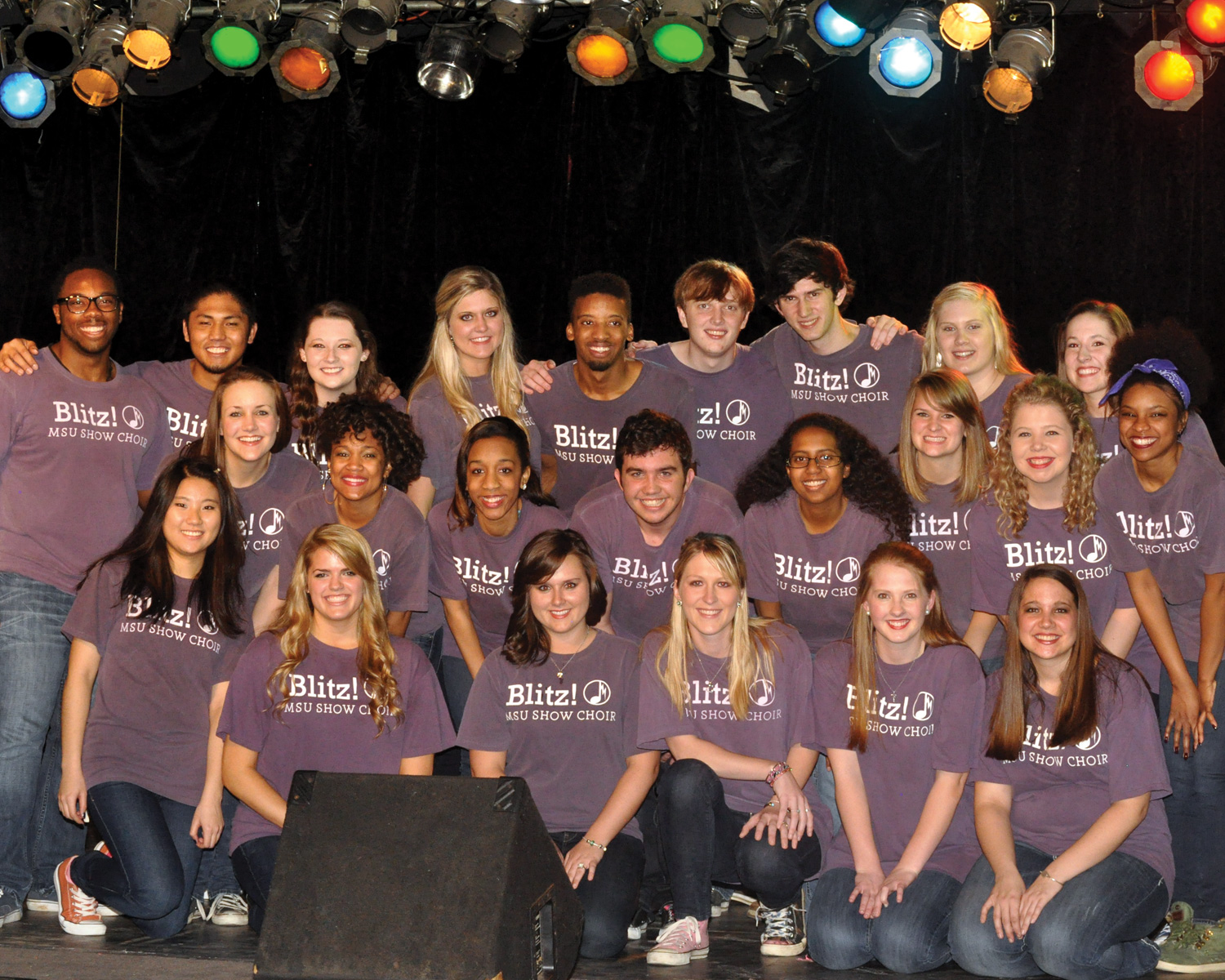 Share
Share this:
Digital
PDF
Issue
Blitz! is a student-led organization. Though they do have a university faculty advisor, as all student groups must, the student-run executive board handles all issues of finance and planning. The group chooses music from a variety of genres and uses choreography from diverse styles, such as jazz, hip-hop and partnering.

Blitz! members have produced a show each semester for the past five semesters, either just for themselves or in conjunction with other on-campus performance groups; membership is decided by auditions that start with a vocal solo, which is followed by a dance portion learned onsite, and finally an interview with a panel of judges.

Like the other choir featured in this issue-the UK’s Euphoria-Mississippi State University’s Blitz! Show Choir also found its inspiration in the TV series “Glee.” Keifer Slaton, the Vocal Coach for Blitz! and a senior in Chemical Engineering, notes that three years later they “aren’t the choir from Glee anymore.” He adds that it’s been rewarding to watch the group diversify in terms of their musical choices, particularly as new members came on board. Group member Jordan Dear adds that in Blitz! someone can sing and dance to “hip hop to country and everything in between.” Keifer explains that the group is special-in part-because they do both the traditional and the modern songs, and it’s not necessary for any of the group’s members to plan a career in music in order to be part of an excellent show choir.

A Show Choir for Non-Music Majors

Surprisingly, very few of the group’s members were in their high school show choirs. Microbiology major Gabe Posadas, however, is a show choir alum who missed the joy of performing and the rush “right before the curtain opens,” and Computer Engineering major Jhona Gibson can draw on her church choir experience and dance background.

Most members, though, are experiencing the joys of show choir performance for the first time. Jennifer Warren-who is studying Biological Sciences with a pre-veterinary focus- adds that she had a difficult time finding an on-campus organization that didn’t “require an academic commitment or a religious affiliation,” while Blitz! was “truly an organization that is open to anyone.”

Additionally, of their 25-member group, very few are music majors. For the rest of the students, this group offers the chance to indulge their love of music even though they are working towards futures in non-music fields.

Elementary Education major Camille Fleming explains that though members aren’t planning for a field in music, they still “love to sing and dance,” and Blitz! offers the opportunity to “expand our passion for music even if it may not be part of our future.” Abigail Stricklin, majoring in Broadcasting, seconds Camille’s assessment. She adds, “Not everybody can read music, or play an instrument, but Blitz! attracts non-music majors because those aren’t things that are required to be part of Blitz!” In fact, Ira Hampton, in Agricultural and Biological Engineering, is one student to benefit from this open policy. He can’t read music at all, but he says he doesn’t let that limit him, and he gets help from his friends in the group.

Nathan Hendrix, who studies Software Engineering, believes the variety of people drawn to Blitz! is part of why they have an influx of influences when choosing songs and why they do songs “most show choirs wouldn’t consider.”

Gabe adds that most music majors are too busy with musical pursuits during their normal school day, so they likely wouldn’t want to spend their evening on music as well. Gabe notes, “For us non-music majors, this is a time for us to ‘escape’ the normalcies of our daily routine. It’s our sanctuary to let loose and sing/dance with like-minded individuals.” On another note, Jennifer suggests Blitz! members have a way to enjoy music without the added pressure of earning a specific grade to keep a particular GPA. Finally, Jamie Grierson, a Secondary Education major, suggests that participation in the show choir demonstrates that people can love music as a hobby just as passionately as those who pursue musical careers, and Blitz! members are able to share that love of music with others who enjoy singing just as much.

Advice to Other Colleges Considering a Student-led Show Choir

Some of the challenges the group faces are not surprising: recruitment, retention, and dedication to the practice schedules while students are attending school full-time and even holding a part-time job in some cases. Members unanimously agree that the time commitment is substantial, but as Gabe Posadas notes, “I haven’t regretted a single day of my time spent in Blitz! , and I hope no one else has either.”

Jhona Gibson believes more colleges aren’t starting their own choirs because they “lack the motivation.” She thinks our culture suffers from young adults lacking the drive necessary to take risks and work past fear. She encourages any group in the early stages to not fret about how they would build an audience or how other students may perceive the work. Instead, Jhona encourages other groups to take the leap first and work out those details later.

Kyle Bellamy, a Biological Engineering major, suggests most colleges lack show choirs because building a group of this nature also takes initiative from the university-not just the students. However, he does believe that a small group of dedicated people can make this a reality on their campuses, assuming every group member is fully motivated through practices and performances, as well as willing to do the tough work to “keep a new club running” (like encouraging other students to come to shows and to entice new members to join). He suggests potential members must be both motivated and “really attached to the project” for a student-led college show choir to be successful.

Recruiting new members can also be challenging, but the group is creative with its methods. For instance, Speech Pathology major Assata Averett notes that the best recruiting tools so far are their “spontaneous performances,” including a flash mob in the campus union-which prompted other campus groups to create their own flash mobs. Nathan Hendrix adds that Facebook and Twitter are also very useful for both advertising and recruitment.

Hendrix warns, though, that any new group should be prepared for “bumps in the road,” and he advises potential leaders to seek out advice from other people who have created show choirs on campus-including contacting Blitz! for guidance or advice. He suggests the group members have a “clear vision” of what they want and then ensure any potential members understand that vision. Engineering major Carra Channell agrees with Hendrix on all of these suggestions, adding that the group members need to be certain to recruit people who are just as committed as the initial leadership and to make sure there’s someone on the team with a “solid background” in managing a student-led organization.

Finally, Gabe Posadas recommends patience when embarking on this project. He notes that three years ago Blitz! did not have a campus presence, which is no longer the case. He adds that building that presence takes time, however, and group members must be able to “take orders and criticisms maturely” for “negativity only begets negativity.”

Though all of the group members are direct about the time and commitment needed from every member, they are equally clear about the rewards they earn from being proud members of Blitz! Posadas concludes, “After it’s all said and done, this is just for fun. It’s not for a grade. You’re not getting paid. You’re not being forced to do it. Just have a good attitude about everything, and it will all work out for the best. I promise it will.”