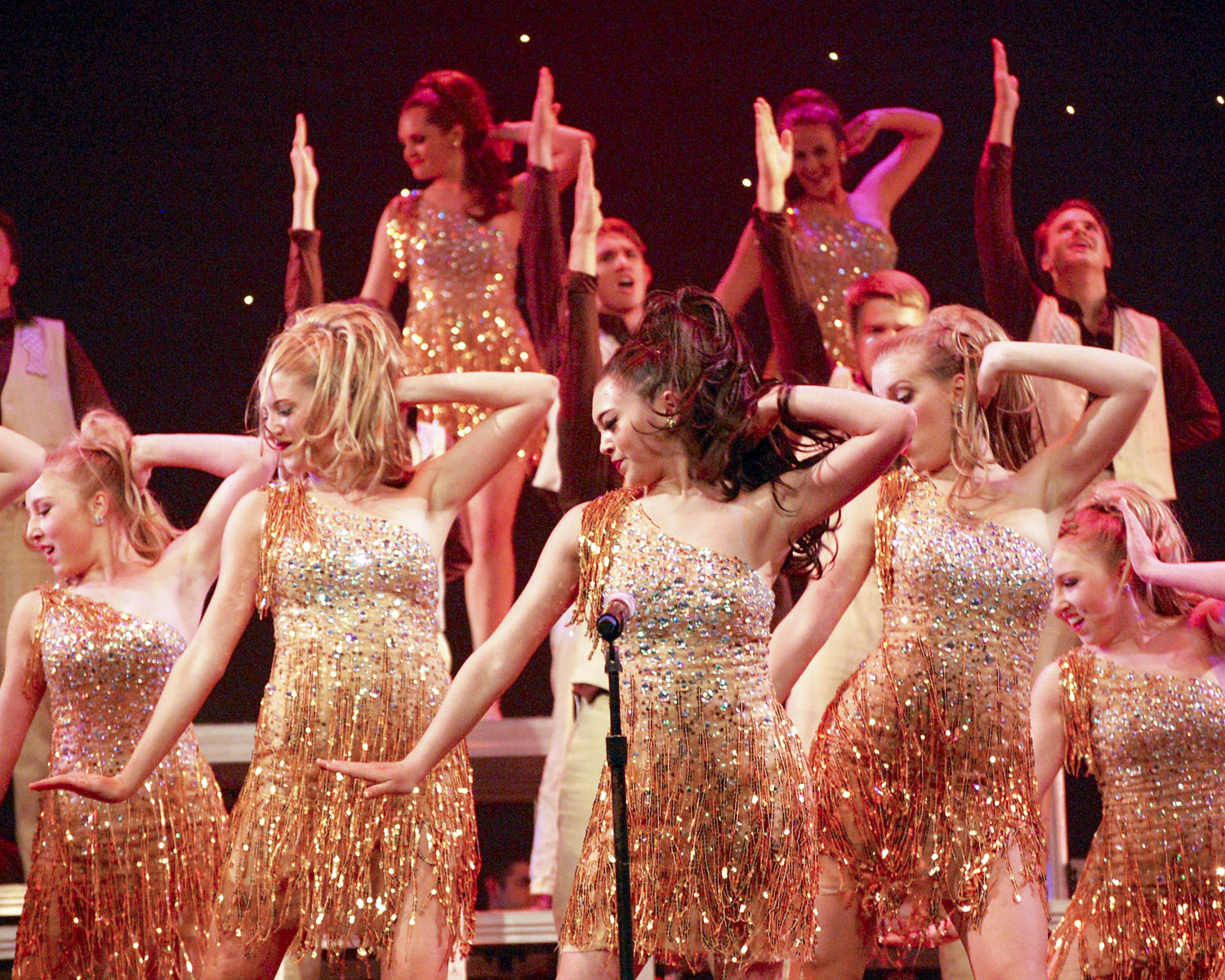 Share
Share this:
Digital
PDF
Issue
Jenks High School, in a suburb of Tulsa, Oklahoma, has 2,800 students in grades 10-12 and 800 in the Freshman Academy. With over 450 students in the music program, there are three instructors who direct eight large choirs and two sections of AP Music Theory.

The Trojanaires Show Choir, though primarily focused on performing for school, community, and civic events, has started competing over the last decade in show choir events.

Larry Downey just retired from Jenks after 33 years of teaching there and 36 years of public school teaching total. Downey was born and raised in Tulsa, where he met his wife Suzanne; they met playing in church orchestra and have two talented sons who, though non-music majors, participate in their college choirs and with musical shows through their Greek organizations, carrying on their parents’ legacy of a love of music.

Downey says he has always loved music. Like many children of that era, he started piano lessons as a youngster; then he played trombone in high school and sang in church. It wasn’t until late in his high school experience that he joined a school choir, but he was part of an outstanding choral program that was also highly competitive in their district. They would also end concerts with choreography to popular songs. He notes, “I remember singing and dancing to ‘High – Hopes’ and thinking it couldn’t be better than this even if I make it in a Broadway show.” He explains that his college choir, the University of Tulsa Modern Choir, “had its roots in a traditional Fred Waring Young Pennsylvanians-type entertainment format using popular songs performed in a choral format.”

Later, as h e began at Jenks, while team-teaching, he worked with the show choir established at the time. They were basically “fourteen singer/dancers wearing polyester jumpsuits with bellbottom pants.” He recalls that the couples each shared a microphone on a stand, something straight out of the “Lawrence Welk Show.” He jokes it was akin to, “When in doubt, sway to the right!”

In the time he has spent developing the Jenks Trojanaires, they have grown to fifty singer/dancers with a full combo; they use elaborate costume changes, props, and sets, and they have “extensive layered choreography.” Though he is having to relinquish the reins on this powerful troupe he has built, he anticipates that the new director will follow current trends in show choir while “using the tradition of excellence but embracing new vision for the future.”

Downey explains that Jenks has strong academic and athletic programs, and he realized Arts programs could not compete for those students without losing some in the struggle. Rather than compete for them, he embraced the multi-faceted nature of those talented students. They created show choir as a zero-hour credit class so students would not be forced to choose, and as a result, he explains, “Trojanaire members include academic scholars, class officers and athletes in every sport.” Though these students have regular choir as well, they meet outside of normal school hours for show choir, and thus they are able to keep all of their upper-level academic work and play their varsity sports, and even keep part-time jobs if they like.

Angela Turner is a show choir parent and Booster Club President of Jenks Vocal Music. She notes, “The Jenks Trojanaires put their all into it,” and they work incredibly hard for no other reason than the pure joy of song and dance. She notes they wake up early every day of the week to practice and work on the competition program even while they are rehearsing for the spring musical. She explains they are always learning and working on two major programs at once. This year, while they were busy performing Mary Poppins: The Musical, they were also competing in the Heart of America Invitational. As they were breaking records with tickets sales for Mary Poppins later, they were placing in a national competition. She stresses, “To say these students are talented and dedicated is an understatement.”

Downey also counts himself incredibly lucky to have many parents who are active in helping with the music program in a wide variety of capacities: clerical, financial, planning, costuming, set design, communicating, and publicity. He also praises them for help with the “never-ending chore of feeding teenagers!” Downey adds that he has always felt he could ask parents to help so he can focus on teaching their children to sing, and he’s found that parents are happy and proud to share their talents because “they love to be around their children.” As such, the “reward” for these parents is being part of their children’s activities, parties, and trips.

Downey notes, “I recently received a note from a student who thanked me for teaching them ‘to be successful in crescendos and in life (which sometimes seemed like they carried equal value)’. This probably sums up what any choir director wants-that a student will learn to develop their singing voice to fullest potential, exhibit musicality in a group setting, but also the by-product of satisfaction with the work ethic that comes from being part of an organization with common and specific goals.”

Most importantly, he wants all of his show choir members to feel an obligation to be lifetime singers, whether they share their gifts with colleges, churches, or larger communities. He stresses that our society needs singers.

In planning each school year, Downey looks to tackle a personal challenge-like directing a new musical or learning a major choral work-and to incorporate a theme that brings social awareness to his students.

For instance, one year brought Trojans Travel tee-shirts engraved with a road sign logo which reminded students to share their talents far and wide. One competition show celebrated world unity, so the Trojanaires helped with a state fundraiser that built water wells in Africa.

One of Downey’s favorite memories was a day the group performed for a private social event at a local country club that was paired with students serving a meal at a homeless shelter. He recalls, “The vision of the dinner jackets, beaded dresses and sparking jewelry covered with aprons, hairnets and plastic gloves gives insight into the students sharing of themselves and their talent in many ways.”

Cody Davis, former Trojanaire who is now on a world tour of Cinderella, recalls that Downey was always up for a challenge, consistently inspired by new ventures. He adds that Downey’s passion for teaching encouraged all students to be their best rather than focusing on being “THE best.” Davis explains, “Downey sees more than just artistic potential in his students. It can be easy to get caught up in competition, but Mr. Downey taught me that it’s far more than that.” Because Downey expected them to be well-rounded, active citizens in their own communities, they learned far more in show choir than just dance moves. He notes, “We had confidence in who we were as people-and a show choir, too-because Mr. Downey led by example and believed in each of us.”

Brian Nhira, of Brian Nhira music, is currently in Zimbabwe on a musical mission. Nhira explains that show choir was the highlight of high school that offered him growth that was instrumental in the path he later charted for his future. Nhria adds that Downey was there to support him at a pivotal point in his life, when he needed someone to help him recognize the gifts he possessed. Nhira notes, “He taught us that in order to be the best, we have to practice like the best. I’ve carried that with me through college and as I travel across the world singing.” He says, though, the greatest thing about his mentor is his heart. “More than music,” Nhira shares, “he teaches us how to walk through life fearlessly chasing our dreams and God-given purpose.”

Show choir parent and fellow educator D’Ann Hargrove was a Trojanaire before Downey’s arrival, from what she jokingly calls a “bygone era”; he was her supervising teacher for part of her student teaching, and she has been a colleague of his at Jenks since 2000. Hargrove notes, “Larry Downey has long remained true to his mantra: Dream Big.”

She adds that during his time at Jenks, the Trojanaires have accrued awards at state, regional, and national levels; she believes much of their success stems from “his musicianship, his creativity, and his work ethic.” She calls Downey a “musician’s musician,” a diverse and impressive educator who is adept at all levels of musical performance: singing, directing the students or the band, and playing in the band. Hargrove also praises Downey’s talent for unexpected and fresh theatrical elements and ideas. She quips, “A stage-sized hot air balloon that inflates during a musical number? Why not? Stairs that light up when the singers step on them? Absolutely!”

Hargrove adds that the last school year has been especially gratifying for her, as she watched her son Wyatt be part of the Trojanaires, an experience that has brought him a core of wonderful friends, vast travel experiences, and “some funky dance moves.” She is grateful that her son, along with hundreds of other students, have benefitted from Downey’s wisdom and enthusiasm. “He will be greatly missed,” she concludes, “but he has left his successors a remarkable legacy on which to Dream Big.”