Madison Central’s Reveille: Launching a Competitive Show Choir and Facing Down a Mentor 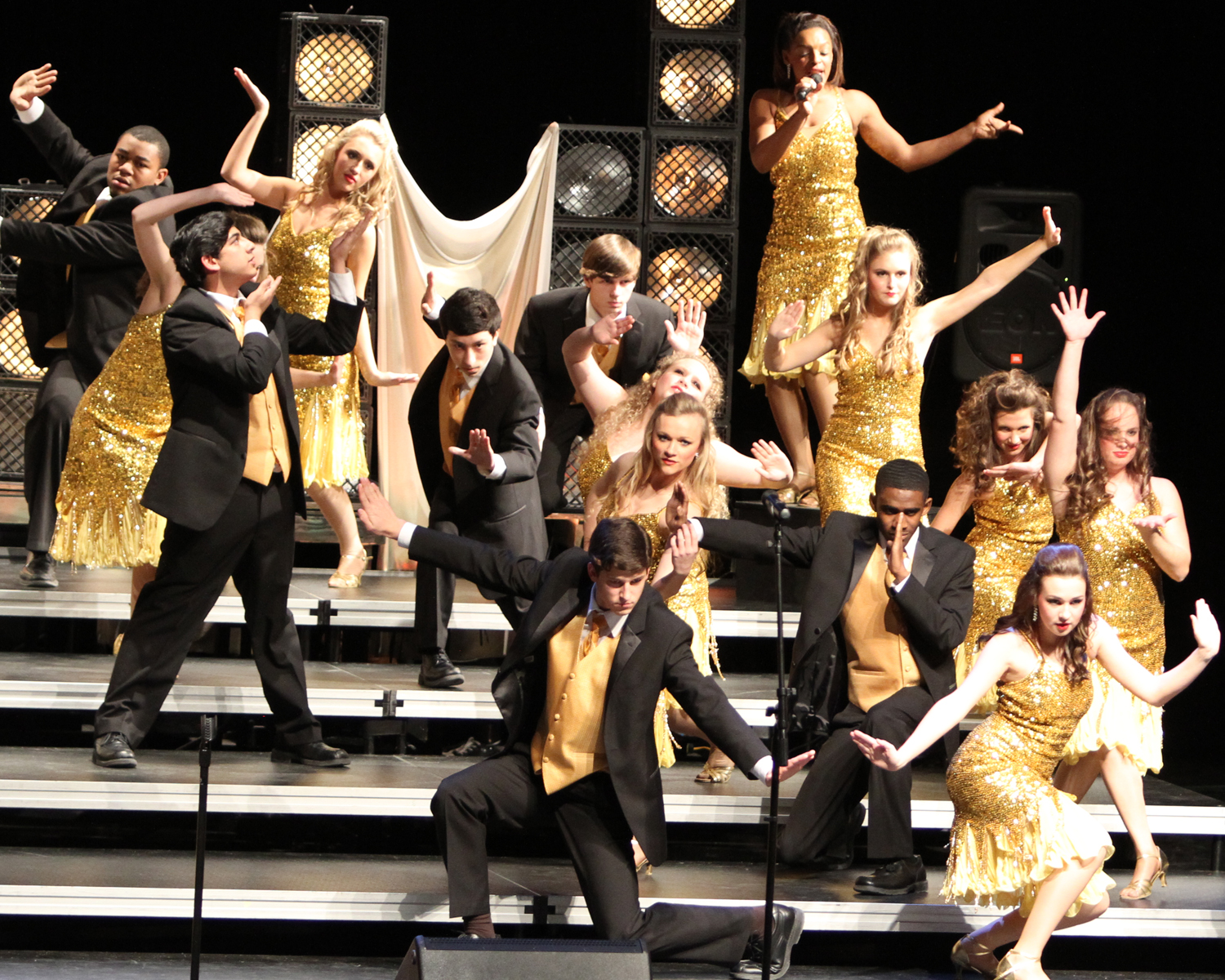 Share
Share this:
Digital
PDF
Issue
Max Lyall was not a total stranger to the demands of building an award-winning show choir, having been a prominent member of the nationally lauded Mississippi show choir Attache.

However, while Lyall knew what it took to be successful from a student perspective, even he—after working under his mentor’s tutelage—was shocked by the amount of time and energy that went into preparing a show choir for competition. “It’s a monster,” Lyall notes. “It’s all consuming and takes all of your time.”

Initially, when graduating from Clinton High School, Lyall had no intention of directing a show choir. In fact, he says, “The last thing in the world I thought I’d ever do was be a high school teacher.” He planned to be a professional drummer and attended college on a percussion scholarship. However—as it has a tendency to do—life took Lyall some different directions, and he left school for a while to find his path. As his family grew, he decided to return to school to finish his degree in music and found himself smitten with a cappella choir music. Though he enjoyed church music and considered a career in that fashion, he also recognized that a high-quality choral program could not be guaranteed with volunteer singers. He needed to find that program, or build that program, within an institutional setting.

Ultimately determining that directing a college choir would be his eventual goal, he set his sights on a high school directorship as a stepping stone and was lucky enough to spend a year working under his former director, the legendary David Fehr. Soon after securing a job at Madison Central—just a few miles away from his hometown of Clinton—he fell in love with the job he never planned to have. Four years later, he has no intention of leaving.

Though he never would have envisioned this for himself, he believes he is in the “greatest high school in the state of Mississippi” and living out his “dream job.” He is able to run the musical gamut from centuries-old madrigals to pop-music released this year, and he gets to “play with a bit of all music.” Additionally, he’s been able to work with outstanding raw talent to build a highly competitive and highly reputed show choir program in just a handful of years.

Fierce Competition Softened by Appreciation of the Art Form

Having been trained by show choir legends—like the team of Dave and Mary Fehr—Lyall is quick to note the immeasurable benefits. He was able to come “straight out of the gate running,” and he adds that he would “be a fool” not to have leaned on that training and experience. Lyall also shares that he’s told Dave Fehr that he attributes the success he’s had with building Madison Central’s choral program to what he learned from him. He notes, “I have the deepest, most profound respect for Dave and Mary and what they do.”

He adds, however, that there are many areas where he takes his own path, particularly as he finds his own sound; he also knows his training methods and rehearsal schedules vary a great deal from Fehr’s, though “the fundamentals are the fundamentals.” Fehr and Lyall have also maintained that strong mentor-to- mentee relationship for the last few years, even when Lyall’s group has faced Fehr’s group in competition. Lyall adds that Fehr encourages him to call with questions, and he’s “never been anything but gracious.” Though Lyall recognizes the fierce competition in the show choir world—and understands the rather constant comparisons between show choir and team sports—he believes his relationship with Fehr may be easier to navigate because show choir is more than just a sport; show choir is also an art.

“It’s music first,” Lyall explains. “It’s supposed to be an art form before it’s something competitive.” What that means, for Lyall, is that he and Fehr have far more to talk about at the end of the day than numbers on a board.

They can discuss the arrangements, the costumes, the choreography, and any number of artistic elements that go well beyond competition results. He adds, “I can deeply enjoy the Attaché show from an artistic standpoint,” and he knows Fehr can do the same when watching Reveille perform.

It helps perhaps that he and Fehr are “very in tune with each other musically.” Either way, there are far more interesting things for these accomplished directors to discuss “besides rivalries.” Despite the desire to win—which is incredibly powerful on both sides—Lyall believes the “art overshadows the competition.” Also, he knows Fehr wants him to do well—though Lyall adds, with a chuckle, that Fehr wants to see him succeed “as long as I don’t beat his group.” Of course, that goes the other direction as well. Yet, somehow both men maintain a close bond and a deep respect that even head-to-head competition did not alter. Lyall concludes, “He and I were friends before, and we’ll be friends after.”

Taking a show choir program to competition level is a daunting task. Lyall notes that many Madison Central parents and students were familiar with the idea of show choir, thanks to Attaché’s name recognition and Clinton’s close proximity to Madison, but they weren’t at all familiar with the level of dedication and funding needed to build a group that could compete against long-running show choir programs. Tommy McMillin’s daughter, Ruth Allison, was just starting her sophomore year at the high school during the first year of the choir’s competition efforts—which was also Lyall’s first year at the helm.

McMillin is still in awe of how dramatically the program advanced under Lyall’s leadership. He recalls that the parents really had no way to wrap their minds around the type of program Lyall planned to build, and the only way they would fully appreciate the realities of show choir competition was for Lyall to throw all of them into this world. To let the students and parents see for themselves what was required, he brought his group to competitions early. He made sure parents knew they should accompany their kids to competitions whenever possible—not to fret about costumes and earrings, since those are responsibilities Lyall believes should rest on the performers, but to provide emotional support.

Lyall brought both students and their parents on this “educational experience” that showed them all “the moving pieces and parts that go into show choir,” McMillin explains, which gave the group exposure while exposing the group to this new world; that firsthand knowledge helped parents and students understand what was expected and what was at stake. Lyall also gradually increased their commitment to competitions. The first year, they did one competition—the second year, they did three; the next year, they did four. There were certainly times, McMillin recalls, when they felt “behind the eight ball” in those days. McMillin remembers an early competition, before their costume carts were part of their process, when kids were carrying costumes and make-up, hustling about, trying frantically to stay organized. Even though they were learning the hard way at times, McMillin is glad Lyall didn’t wait. “He was willing to push the group,” McMillin adds, “which was the only way to do it.”

McMillin also notes that Lyall wasn’t afraid of the growing pains that were an inevitable result of a rapidly expanding program. The year they jumped to over fifty students, McMillin knew there were certain to be some pitfalls, but Lyall did not want them losing momentum; Lyall wanted them to see that “they had to excel and do it pretty quickly.” They also couldn’t risk losing support from the parents or community when the program was growing so rapidly. Because of those risks, McMillin believes Lyall has brought Reveille “further down the road than they ever would have been.”

Interestingly, though his daughter graduated two years ago, McMillin is still at the helm of many of Lyall’s parent booster club efforts—thoroughly devoted to Lyall and Reveille. ThoughMcMillin’s youngest son is still deciding if he has enough interest to even audition for the group, McMillin is sticking with these “high-achieving kids” and their director. “You can’t do something halfway,” he muses, when recalling the gutsy moves Lyall made in the first few years as director, and McMillin seems to embrace that same philosophy. “His vision is to be the best show choir in America. As a parent, you want your child to be part of something successful, but also serve under someone who will push them to be their best.”

These same sentiments are shared by another Reveille parent, Joyce Hall, who has worked with the program for three years, since her daughter Alyssa was a sophomore. Hall believes Alyssa’s experiences with Reveille “provided her with musical, dance and theatre training and experience in one class that she could not have received in any other venue.” Hall also sees Lyall as an exceptional mentor to Alyssa, as he skillfully provides guidance to Alyssa and other student captains, without dominating their roles. Hall also credits Lyall for a “keen eye for putting together a unique show in terms of music, dance, stage props, lighting and theme.”

Hall, like McMillin, has been incredibly impressed with the quality of the performances Lyall has been able to pull from these students in such a short period of time. She believes his rapport with the students is part of his success, but she also notes that the students respect his artistic talent and authority. Hall believes Lyall is “uniquely gifted in this role as director” and applauds his insistence that all show choir members be part of the school’s regular choir to “expose them to other types of genres and to expand their vocal performance.” She believes that requirement has clearly paid off, as evidenced by the quality of the show choir’s sound.

Hall also notes, “Max has not shied away from challenging the kids musically or theatrically. He has also not shied away from challenging the parents.” In addition to launching a very successful show choir camp for several years, Madison Central also hosted their first competition just last year, which was—according to Hall—“a great success and all due to Max’s leadership and belief that we were ready for this challenge.”

Alyssa Hall echoes her mother’s praises of Director Lyall. With her last months as a high school student fast approaching, Alyssa recalls the excitement and stress of those early competitions—as she jumped in with both feet even when having no idea of what might happen next. She remembers the extreme highs and lows—from earning a Grand Champion trophy to coming in dead last that same season. She recalls being terribly intimidated, along with her peers, as they faced down Attaché, a choir she had long admired. What she is focused on most, right now, though is how much she will miss Lyall, who has been “like a second dad” to her, and how she will keep song and dance in her life as she moves on to college and embraces new opportunities. Chances are, like Lyall, she will be fearless.