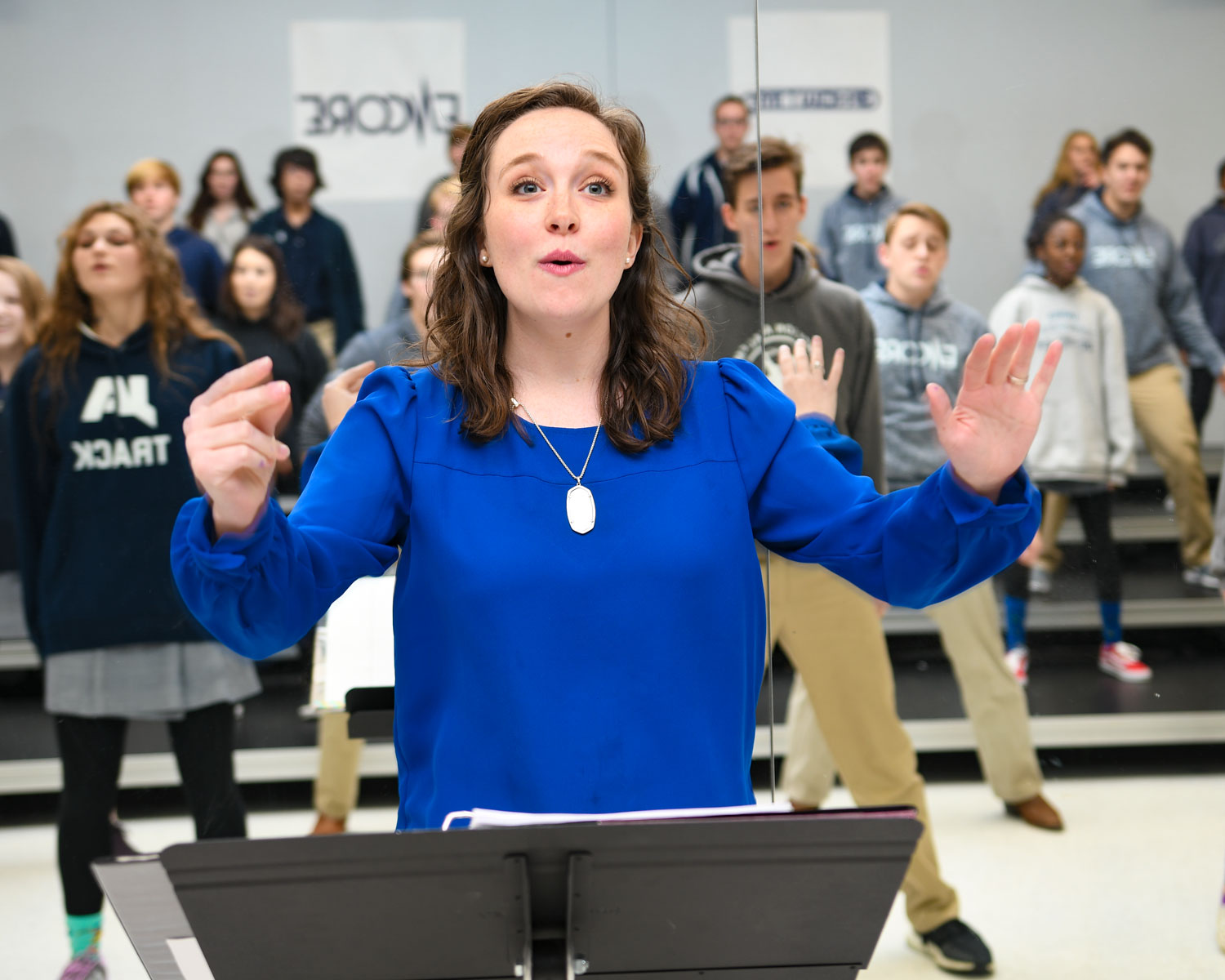 Share
Share this:
Digital
PDF
Issue
Amy Whittenton knew as a child she wanted to be a teacher.

Her experiences as a member of Encore, the award-winning Upper School show choir at Jackson Academy in Jackson, Mississippi, were more than just about friendships, fun, and competition: They led to a career path.

“During my junior year, I became an Encore captain,” said Whittenton, who always loved to sing.

“As a captain, I had to re-teach choreography, clean choreography, and help students learn their music. I had to explain things to my peers. I felt comfortable doing that and learned I was good at it. That’s when I knew I wanted to major in music education in college.”

At Home in School

Whittenton earned a bachelor’s degree in music education from Mississippi State University in 2016 and uses it daily at JA, the school she attended as a four-year-old child through graduation from high school in 2012.

At just age 25, Whittenton is the choral music director for both Middle School and Upper School at JA, the largest independent school in the Jackson area.

In the 2018-2019 academic year, she became the first alumna to direct Encore, which she first saw perform as a fourth grader at the school and aspired to join when she became old enough.

Steve McCartney, head of Upper School at JA, said Whittenton has the skills for the job plus firsthand knowledge of JA’s reputation for excellence, noting, “She was a vital part of JA’s musical productions and show choirs when she was a student at JA,” he said.

“Her insight as a former student, her talent as a choral instructor, and her enthusiasm are just the right combination for our students.”

McCartney knows from experience the commitment and devotion that a topnotch show choir demands. As a student, he played trombone in the band that accompanied Attaché, the award-winning show choir at Clinton High School in Clinton, Mississippi, and served as the group’s instrumental director for seven years after graduation.

“I have been fortunate to play in the JA show choir band and in the orchestra of the school musical with Amy at the helm,” he said.

“Her passion, expertise, and leadership are the right combination to continue to build on the strong programs we have in place.”

Whittenton recalls songs from her show choir days such as the Elvis Presley hits “Blue Suede Shoes” and “A Little Less Conversation” and admits there are still sparkly dresses from those days in a closet at her parents’ home.

What’s stuck with her more than every detail of every performance, however, is how beneficial the experience was and continues to be for students even after high school graduation.

Beyond Song and Dance

Whittenton notes, “Show choir helped me step out of my comfort zone and gave me stage presence,” she said. “I don’t think I would have confidence to stand in front of people like I do if I hadn’t participated in show choir.”

She continues, “There are so many life skills show choir teaches. Stage presence. How to work in teams. Delayed gratification because we begin working on a show in August but don’t get to perform it for another six months. Time management.”

Encore included about 20 students when Whittenton was a member, but it has flourished over the past several years, more than doubling in members since then.

Encore now includes 53 students who sing and dance and is a respected competitor in the large division. Eleven students are crew members, directed by Whittenton’s husband, Will Whittenton.

There is also a band comprised of 10 musicians, two of whom are JA students with the rest being a mix of JA parents and musicians from the community.

Pulling Together a Team

Whittenton comes up with the show’s theme for the show before the school year begins. This year’s show is “Transylvanian Lullaby.”

Whittenton works with Gail McInnis of Hattiesburg, Mississippi, to create costumes for the females in the group, and Trinity Apparel Group, which specializes in men’s custom clothing and is owned by the parents of an Encore member, designs the costumes for the male students.

Not to be overlooked are the show choir parents who offer support in every way imaginable from helping run the annual Jackson Academy show choir competition that JA hosts as a fundraiser to driving the rental truck filled with sets and more to competitions.

Also helpful: the JA Arts Guild and the school’s administration, both of which back the show choir experience 100 percent, she said.

JA opened a state-of-the-art performing arts center in 2010 when Whittenton was in the tenth grade at JA, and she credits that with boosting student interest in the performing arts. “Before that, we performed in the gymnasium,” she said.

“The performing arts center is perfectly suited for what we do. It is 100 steps to go from our classroom to the stage.”

The 30,000-square-foot complex is impressive and includes an 800-seat performance hall that offers all the technical specifications needed to mount a full-scale professional production. The hall features an orchestra pit, full fly loft for backdrops and lighting, and a sprung dance floor.

Whittenton directs both Encore and Showtime, JA’s show choir for seventh and eighth grades, and both groups have experienced high levels of success.

While competition and winning trophies are exciting, Whittenton believes the show choir experience is about so much more than that.

Working together as a group, performing the best show possible, and being a good representative of the school are also important, she said.

Latham Nance, a senior at JA who has performed for four years in Encore and two years in Showtime, credits “Mrs. Whitt’s” leadership, her ability to relate to students, and her drive with making the 2018-2019 year the best yet for Encore.

“She’s come in and made it magical,” said Nance, who is a featured singer/dancer. “Our show is fantastic and she’s done an amazing job her first year teaching Encore.”

Whittenton emphasizes the correct way to sing, and her energy energizes the group, said Nance, who plans to major in music education in college. This direction for his continued education came about largely because of his show choir experience, which he values because of the supportive culture and the friendships made across school boundaries.

Reese Anderson, a junior at JA and also a featured singer/dancer in Encore, remembers seeing Whittenton, then a high school senior, perform with Encore. She also watched as Whittenton played the role of Gertrude McFuzz, a bluebird, in “Seussical the Musical,” a JA production.

“I was in the fourth grade,” Anderson said. “That’s my first memory of her.” These days, Whittenton makes an ideal director, Anderson said, because she is “always calm and collected, only intense when she needs to be.”

Encore’s vocal sound has been transformed thanks to Whittenton’s knowledge and ability to teach the basics of singing, Anderson said. “Vocals are her focus, and it has taken us to the next level,” Anderson states. ”She’s helped us put it in practice. It’s ingrained in us now.”

Whittenton counts herself lucky to work at a school where her educational contribution is valued and where she continues to be part of its history, guiding the show choirs that she watched perform for many years and, in turn, performed with as a student.

“I love this job,” she concludes. “I am blessed getting to do what I love every day.”