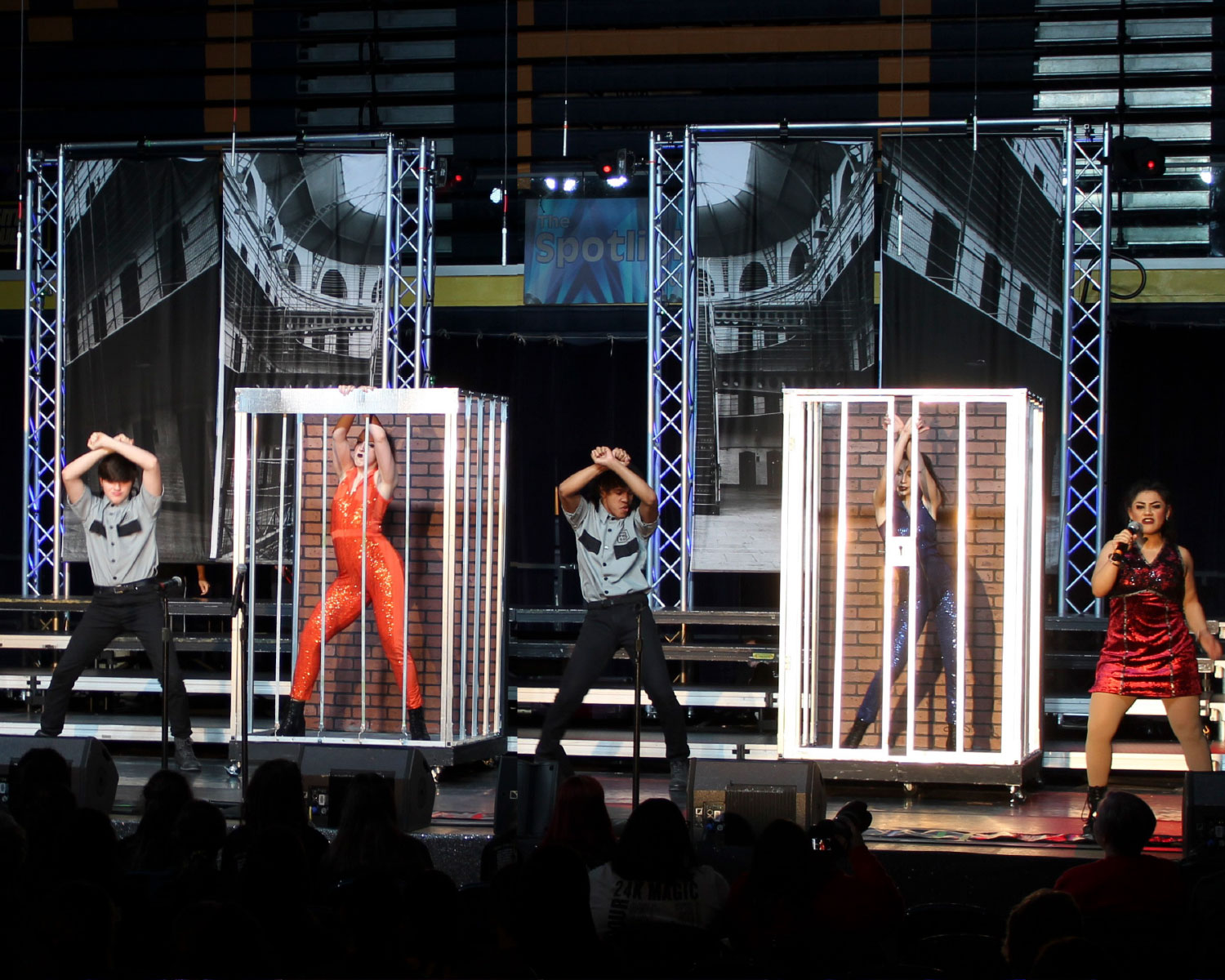 Share
Share this:
Digital
Issue
Let’s talk a minute about mental health and society—certainly not common topics associated with the wonderous world of show choir, where everything is beautiful, joyful, and synchronized to peppy beats.

The weight of oppression and societal expectations is often invisible, yet feels as real as any physical wound. An amazing show choir, and their fearless leader, tackled a show that address these shackles.

Within each of us is a delicate interplay between who we are, who we want to be, and who society tells us who we ought to be. Sans the few brave, loner souls who live out in the wilderness, living off nature and hijacked WiFi, everyone can relate to the feelings of being judged, marginalized, or being unjustly dismissed.

Tess Tazioli, show choir director, and her girls from Fishers High School’s female ensemble—Sound—shine stage lights on these often side-stepped topics among both the show choir world and our culture.

In an environment that often focuses on the brighter traits of life, Sound and Tazioli instead dedicated their most recent productions to illuminating personal growth and community connectivity in the face of systemic oppression.

From Self to Society

The theme of the show Breaking Chains—on its surface—is about a prison break. As the scene opens, the set is decorated with prison bars and chains.

This iron-laden set design, in conjunction with the opening narrative voiceover about the “ongoing battle” of stigmas, instantly creates a powerful atmosphere of immersion for the audience to become lost in.

As Tazioli explains, Breaking Chains, in its less literal translation, is about destroying the anchors of sexism, racism, and homophobia that are maliciously placed on someone. Then, by working as a team, everyone can loosen these shackles and find personal, emotional emancipation.

Ava Benvenutti, a junior at Fishers High and Morale Captain for Sound, summarized the purpose of the production beautifully: “One of the big things in the theme of our show this year is how we need to find courage together to stand up to the things that are putting us down and the things that are oppressing us. And I really like how [the show] is so  versatile [in covering] all the issues we are facing. Like yes, it’s against sexism, but it’s also against racism, and homophobia/transphobia…it’s really important to lift people up and find strength together to overcome them.”

Morgan Joiner, fellow junior at Fishers, as well as Communications Director for Sound, added to this point by discussing how freedom for self, in both accepting and confronting emotions through authenticity, is what matters in the pursuit of freedom.

Joiner also explained how the process of working through these emotions sparked exponential growth in her confidence to confront her emotions holistically; she hopes the audience is inspired by the story to face their demons as well. Additionally, as a person of color, she noted how inspiring it was to see so many people of color highlighted and headlining the production.

Giving Life to the Intangible

After deciding to pursue her goal of bringing these powerful thoughts to the stage, Tazioli had to figure out how to portray all the —isms of society in a practical, palpable way. Tazioli explained this is largely done via songs which, in themselves, have layered meanings.

The show opens with “Renegade” by Styx, which establishes feelings of anger and fear. This tone was next continued by “Circus of Your Mind” from Finding Neverland: The Musical, which explores how the confines of imprisonment promote a type of psychosis among the inmates.

Due to the recent self-isolation many are (hopefully) practicing in response to COVID-19, there is a newfound appreciation and understanding of how unwanted lockdowns can wear on a psyche.

Fleshing Out the Figures

Next, the girls performed “Hard Hearted Hannah” by Ella Fitzgerald, which explores how the inmates are still able to find a sense of life, even within the captivity of the steel bars.

During this number, the show is exploring the concept of maintaining a sense of identity, even when—by all other accounts—someone has been stripped of the things that make someone an individual.

As the audience is being introduced to the idea of identity within prison, the girls transition into “Cell Block Tango” from Chicago—a song which is about humanizing these otherwise villainized women.

And as the audience learns backstories and motivations of the characters, the themes of empowerment and strength are personified.

Time to Catch Our Breaths

Next, the group moves into the ballad. After the rousing “Cell Block Tango” number, many of the girls are ready for a slower song so they can regain their stamina.

Additionally, the ballad, which is a combination of “Free at Last” from Big River: The Musical and “Flight” by Carnelia Craig, is also the song Sound performed for their virtual choir video project—which has since gone viral.

In the full production of Breaking Chains, this ballad allows the audience a moment to step back and appreciate the emotional journey that has unfolded. In the virtual choir video, since the piece is segregated from the rest of the narrative, the audience is able to appreciate the message of hope on its own merit.

Within the context of the show, however, the ballad serves the purpose of giving the audience and the characters a moment of reflection, or as Tazioli explained, time for “clarity for these really dark and deep themes” the production was focused on expressing.

Joiner explained that this song was the player’s opportunity to show the full range of emotions those imprisoned (in any form) likely experience. This, in turn, leads to the climax of the story.

After the girls change into their second costumes, which shine with equal intensity to their unyielding confidence, the show transitions into “Jail Break” by AC/DC and “Keep Yourself Alive” by Queen. This is where the characters are showing what life can be like after prison; through teamwork, the girls are able to focus on the goals of autonomy and sovereignty within a community.

For the next songs, Tazioli chose “Freedom” by Beyonce and “Break Free” by Ariana Grande. Tazioli noted she chose artists that were a part of the same oppressed groups she was highlighting throughout the production: women, people of color, and LGBTQ groups were represented.

As Tazioli stated, the girls were “doing so much more than just singing and dancing”; they were delivering a multi-tiered message.

Sound is based out of Indiana, which is a consistently conservative state. When asked how the production was received at competitions, not only had the school won multiple awards for their performance, but they were also largely praised for their execution in portraying such difficult themes.

Furthermore, Fishers High School administrators showed the utmost support for the show and its message.

After the Curtain Drops

Spring 2020 has been a trying time for most Americans, and many of us are especially sympathetic to how hard this season is for graduating seniors. Sound is an extremely close-knit group of young women who tend to wrap up each rehearsal with a group hug.

Due to COVID-19, the girls have not only lost many opportunities to show affection, but also have been denied the traditional, glorious sign-off they deserve.

In response to this, the day before social isolation was formally enacted, the group got together one last time to sing “Free at Last.” And over the last few weeks, on social media, each day a single senior from the performing arts gets a special shout-out with their picture and bio.

Through these actions, the seniors—as well as the rest of the group—are reminded to focus on unity and support.

Much like the characters in the show, the students are focused on appreciation and endurance. Tazioli and her girls are sparkling reminders of what it means to be strong, steadfast, compassionate women, undeterred by temporary setbacks.