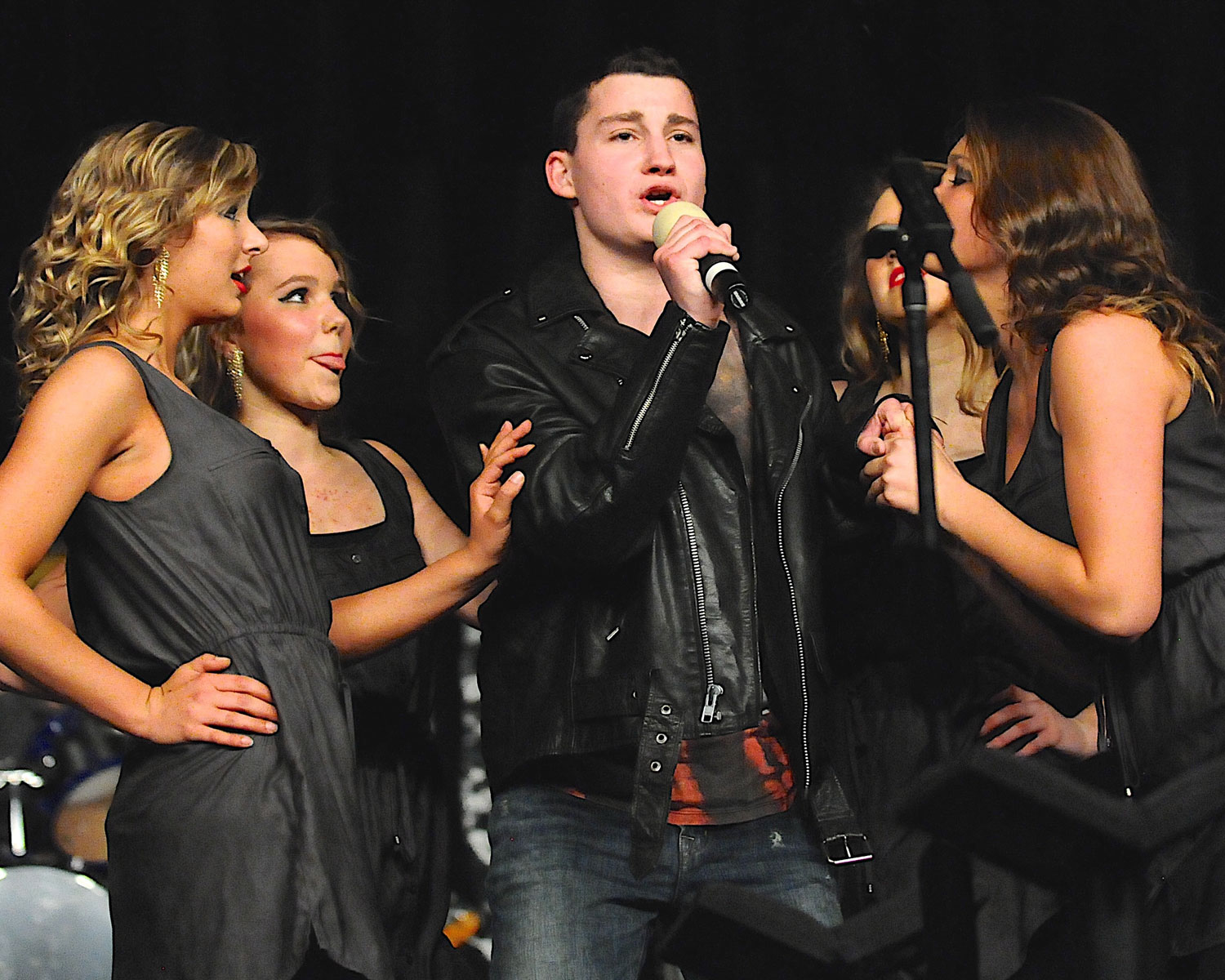 Share
Share this:
Digital
PDF
Issue
Director Tom Gerking explains that what lead him to a career in music education was, first and foremost, his love for school. While in Lawton-Bronson High School, Gerking was active in many activities and organizations: from football and track to show choir and band to National Honor Society and Student Council.

Having loved every year of his schooling, and inspired by his mother’s teaching, he knew he wanted to make that environment part of his career as well. Ultimately, he knew he wanted to teach, and he realized music should be his focus once he transferred to Morningside College in Sioux City, Iowa. There, he student-taught and worked alongside some talented and passionate educators, which helped him realize he was on the right path.

A Small but Supportive Community

Luckily, though the community is small, it is incredibly supportive of the arts. Currently, the show choir is celebrating its 50th Anniversary. In the course of five decades, though, the school has only seen two directors. The loyalty is impressive but not surprising, where the community rallies around its show choir program and its directors.

In the high school, there are fewer than 150 students, grades 9-12, and 100 of those students are involved  in the vocal music in some capacity: 60 are involved in show choir as singer/ dancers, band members, or stage crew. In what is his twentysixth year of teaching at Westwood, Gerking notes they have gone through some difficult times, but they have remained focused. He thinks their consistent goal to “be the very best we can be” has kept them on target throughout any rough periods. With choirs over the years that have ranged in size from 57 students-during his first year of teaching-to 136 students in the late 90s, his motto and their goal has always been, “Be amazing at what you do.”

Of course, they could not be amazing without help, and that is where one of the main strengths of the Westwood program comes into play. First are the Westwood Music Boosters, who Gerking notes have been “fantastic supporters of the vocal and instrumental programs since my arrival at Westwood.” In fact, over the years, they have raised thousands of dollars to help with formalwear, band uniforms, instruments, choir robes and other items to support vocal music. Now, they raise money in order to augment the accompanist fund, which benefits the music department as a whole. With regular monthly meetings and elected officers, the group is a constant source of support for all of the music instructors.

The second source of support comes from The JUBILATION Show Choir Invitational Committee, which Gerking credits as a major factor in the success of the invitational. He notes that parents form committees and somehow just “get it done.” He shares that he and the chair of JUBILATION worked together this past summer to seek corporate sponsorship, and they normally have ten thousand dollars generated via donations with each invitational.

The Best They Can Be

While perfection isn’t the goal, Gerking wants his students- always-to be “the best they can be.” Gerking needs their experiences during both rehearsals and performances to be memorable and meaningful. He wants them to have fun and “love what they are doing.” Additionally, he has worked to expose them to the country’s best show choirs. To do so, they have traveled to Branson, Orlando, Nashville, and Los Angeles.

Having learned how best to structure their shows over the years, Gerking is now quite skilled at designing their shows around their own strengths. He asks himself, “Who are the potential soloists? How many trained dancers do I have?

What style of music best fits this group of kids?” From there, he collaborates with other show choir directors, choreographers, and arrangers-friends he trusts for advice. One of the best parts of the show choir community, he explains, is that so many are willing to share their ideas. “I love seeing the concepts brought to life when the group finally performs for the first time,” he adds, “and furthermore I love seeing the changes and growth that occur during the competition season.”

Gerking explains that The Westwood Rebelaires were formed in 1965-66 by former director Myron Armour. Gerking has been at Westwood since 1990. Under both directors, the goal has always been to involve as many students in the program as possible. Longtime Rebelaire supporter Don Lord states how rare that is to have only two directors in fifty years of a music program. “That’s pretty special-that kind of continuity,” Lord states.

Because Lord was a freshmen the first year the Rebelaires were formed, he’s seen it all. He notes that Gerking “turned up the gas” when he took over the program, and he hasn’t slowed down. He also praises Gerking’s passion and the loyalty that passion inspires from the community. Finally, he admires that Gerking will find a way for all students to participate-regardless of expense-in order to share their talents.

In the March 2016 celebration of their 50th Anniversary, several hundred Rebelaires will return to Westwood for the Alumni Show Choir to perform at the 16th Annual Westwood JUBILATION Invitational. Gerking hopes the reunion will serve as a tribute to the founder, Amour.

Former Rebelaires Barry Peterson credits Gerking’s music program for changing both his time in high school and even his life. “What he is able to do with a small town school in Iowa year in and year out is a true testament to his character, compassion, and ability to lead anyone,” Peterson notes. He adds that he’s seen students’ characters and demeanors improve as they take on-and meet-the challenges and demands of show choir. He believes that students realizing they could achieve whatever they set their sights on, if they are willing to put in the hard work, puts them on a path that determines future success.

“It gave many of us a path to see what hard work and dedication can achieve,” he adds. “I’ve never looked up to another teacher in the same way I look up to Tom; he invested his time and energy in teaching me all about music, and-in turn-many things about life.”

Another former Rebelaire, Benjamin Winters admits that he was unsure about being involved in show choir in the beginning, but ultimately his experiences with the group are his best memories of high school. “I am thankful that Gerking was so persistent in getting me involved,” Winters explains. “It allowed me to not only grow as a person, but experience many things that many high school students don’t get to do.” Similarly, Zach Greder recalls that he was a tough sell originally-saying he was not “really into vocal and was more of a jock.” But, Gerking took him in, making him a more well-rounded person in the process. Finally, Heather Hummel notes what a powerful experience it was for her to be part of the music program- especially having Gerking as a mentor. Hummel shares, “Mr. Gerking is such a dedicated teacher and makes his students want to be better and achieve greatness. I’ve always admired his unwavering enthusiasm for his craft.”

Gerking encourages his friends in schools of all sizes to “empower these students to activate their potential.” Adding that he has judged, served as a clinician, and choreographed across the country, one thing he has always noted is that “being positive is the key.” He has long been a believer that the potential inside young people is immense, and his job-as he sees it-is to develop that potential and then give them a platform to share their talents with the world. When reflecting on what it means to be a Westwood Rebelaire, he hopes his students carry that pride forward “knowing that the legacy and tradition continue in this small rural community.” As for him, he’s thrilled to be leading the charge.