Jackson Prep’s Reveillon: Excellence Across the Board 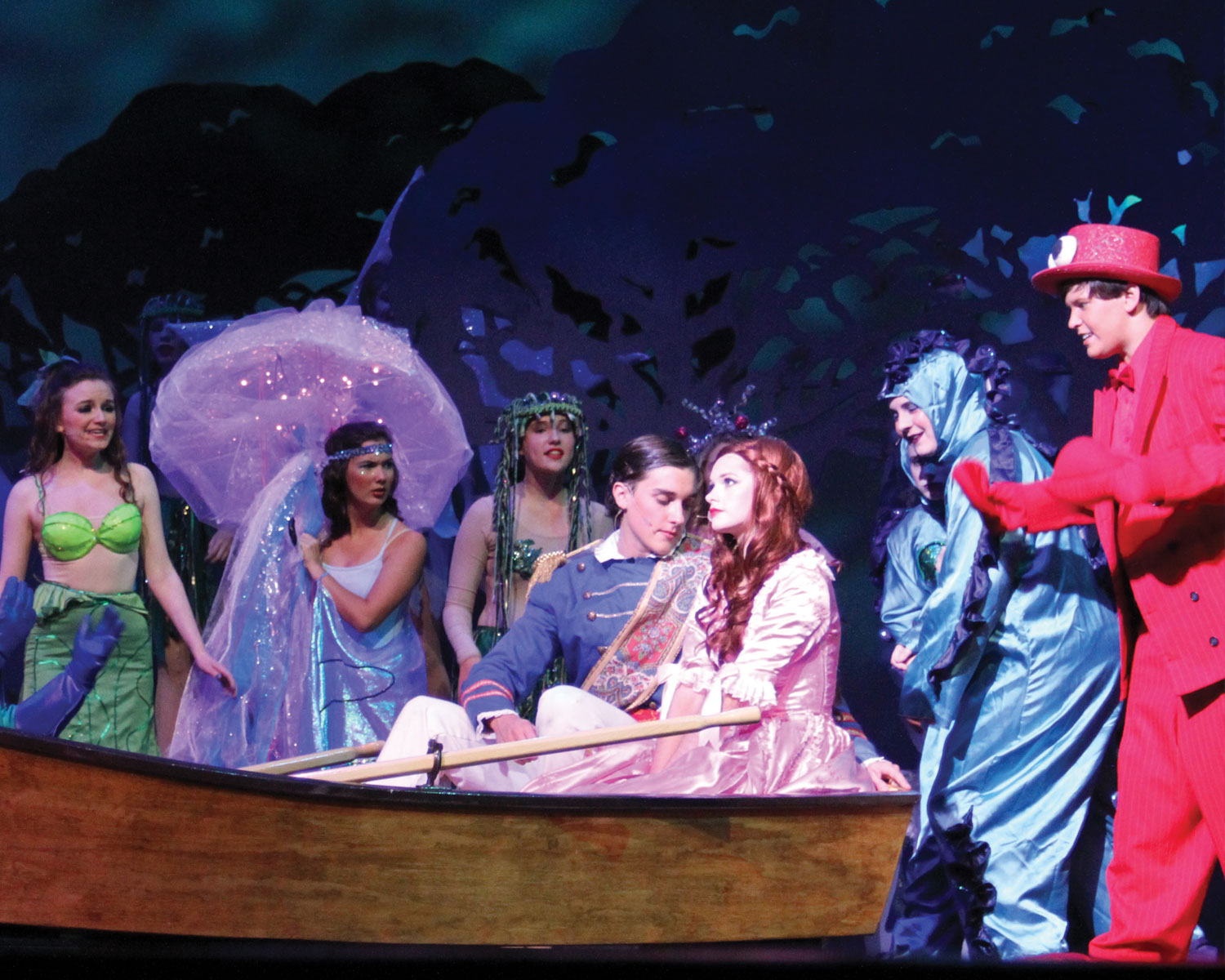 Share
Share this:
Digital
PDF
Issue
Though Reveillon from Jackson, Mississippi, has only been competing for a relatively short time, they have already won numerous awards for Best Vocals, Best Show Design, and Best Visuals. They also have Grand Championships to their credit.

This quick rise to the top is a result of talented students, supportive parents and administrators, and an extraordinary director.

Dianne Holbert’s first experience with show choir came in adding a show troupe to her concert choir in Long Beach, Mississippi; her longtime friend and costuming maven Gail McInnis encouraged her to compete, and Tropical Wave was born. The newly formed choir “made a name for themselves” soon after. From there, Holbert moved to Jackson to teach for the esteemed private school known to locals as Jackson Prep.

In 2007, when she was named the Performing Arts Chair and would therefore oversee band and drama-in addition to choral music-she recognized the ideal timing for introducing the school to show choir. For a second time, she started a show choir from scratch. She asked them at the end of the first year if they wanted to be competitive, and she let them know exactly what that would mean in terms of commitment; they were all on board.

Holbert shares that her objectives for the show choir have always been aligned with Jackson Preparatory School’s mission statement, which notes their work “inspires and challenges students toward academic, athletic, and artistic excellence, instills personal integrity through biblical values, and equips students to pursue lives of distinction in service to society.”

Holbert adds that the Fine Arts Department is focused on preparing their students “for lives rich in the arts,” whether those students became creators, performers, or just consumers of those arts; they seek to “provide the finest preparation in the arts that can be achieved at this educational level.” As part of this mission, while their goal is not focused on winning, their goal is always to “achieve excellence in all we do.” Parent Connie Wegener adds that their quest for excellence is likely “not to defeat opponents but rather to reach certain standards of performance” because each competition brings a “desire to work harder to get better.”

Former student Zack Watson recalls that in his time with Reveillon they went from unknowns to nationally competitive in four years, and he believes that their experience on the national stage contributed to their quest for excellence because, as he explains, “In many respects, we felt we had something to prove, which in turn, provided us the necessary competitive spirit in achieving our goals.”

Excellence in Funding, Venue, and Hosting

This year, the school is hosting its 2nd annual “Jackson Prep Showchoir Masters Competition” in late January, and nearly forty show choirs are enrolled, a number that represents steep growth from last year’s fourteen participating show choirs. Holbert notes, “We had a wonderful competition last year with again another level of excellence that Prep is known for. We dotted every i and crossed every t making sure that directors and students had the best experience ever.”

The Jackson Prep theatre, which seats one thousand, is adjacent to Lindsay Hall, which seats another four hundred audience members and features a large screen with a live feed, ultimately serving as a secondary venue that is perfect for overflow during the competition. This year, the Masters Competition will feature eight large mixed choirs representing high schools, seven women’s groups, and several smaller groups. Jackson Prep has even developed an app for tracing schedules and sharing other information that will be important to their guests.

Obviously, beautiful venues and award-winning shows cost more than time and effort; the financial commitment, as with any show choir, is significant. However, Holbert founded a Fine Arts Booster Club as one of her earliest moves when she assumed her role at Jackson Prep, which has meant steady and reliable funding for each of the choir’s projects.

Because the private/independent school world is different in many ways from the public school experience, Holbert counts herself lucky and fortunate to have parents willing to support the Fine Arts Booster Club that she formed. APPLAUSE has parents who join at a membership level and also has featured corporations who join as sponsors. Holbert explains, “APPLAUSE financially supports all of the arts groups as they raise money through events. This money is split among all of the arts departments. We are asked to not fundraise. It is a blessing to have such support from parents and administration.”

Jackson Prep also does an annual fall musical, with Reveillon members serving in many of the principal roles and all members of Reveillon serving in the chorus. Last year, they produced Les Miserables, which Holbert says benefitted from a huge senior class that included many talented young men. This year, for their first performance in the new theatre which features state-of-the-art technology, they produced Little Mermaid, leading to three sold-out performances.

Holbert states, “While this is a wonderful teaching tool for me to use with the students, it is also challenging to get all that we need done during the first semester of the year. But, I must say, our success as a showchoir has come from the experience on the stage with these musicals. Their performance skills are sharpened when they take the stage in a principal role or even as a chorus member.”

Jackson Prep is also fortunate in that the school financially supports the annual musical in the main school budget, including costume rentals, backdrops, props, lights and sound. Luckily, they already have an outstanding LED lighting system as part of their theatre, which adds to the experience without adding to the budget for every production.

While they sell tickets to cover much of the cost, Holbert explains that the APPLAUSE booster members are a tremendous asset here as well, handling ticket sales and hosting events to promote the show. In addition to having the best possible special effects for these productions, they also have video cameras placed throughout their theater and can produce DVDs of those performances in-house.

Holbert uses the Jackson Prep drama director for assistance with initial blocking, and then she executive produces the shows, including all of the planning and organizing of the sets, lighting, props, costumes, and anything else that impacts the experience. She even conducts the orchestra, which accompanies the show from the pit. For Les Miserables, Holbert says they used a 21-piece orchestra that included members of the Mississippi Symphony and community professionals. This year, for Little Mermaid, they chose a smaller ensemble that featured bass, keyboards, percussion, and auxiliary percussion.

Though Holbert acknowledges that the time commitment is staggering, she also shares that the annual musical is one of the most significant recruiting tools for young students, and she explains that some of her proudest moments as director have resulted when audience members compare the experience to Broadway-level performances and sets. She adds, “That is my goal-to always make sure that level is achieved because, once again, Jackson Prep is known for our level of excellence.”

Excellence and Class, Even Off-Stage

In addition to the excellence they strive for in their performances, Reveillon members are encouraged to maintain their reputation for excellence is all aspects of their behavior. Holbert adds that their reputation, and the legacy of former students, is one that includes “class,” and she demands that students exude that class “in rehearsals, in performances, in down-time at competitions, and outside of show choir also.” She also encourages them to embrace that demeanor for all facets of their lives beyond high school as they interview for colleges and jobs.

Parent Connie Wegener explains that the students demonstrate class through wardrobe as well, with the young men wearing coats and ties and the young women wearing “Sunday church dresses. She adds that class is especially represented in their behavior, noting, “We are Southern ladies and gentlemen and should act that way at all times, especially when representing Jackson Prep.” Wegener believes there is no better program at Prep to develop the three traits she has seen in the young people of Reveillon: “poise, postures, and self-confidence.”

Former student Zack Watson recalls, “No matter where we went, we were expected to uphold the image of class since we were representing Jackson Prep. We were always expected to be dressed appropriately and be respectful to all groups performing. In between groups and before awards, we were not allowed to dance or get on stage…not because it’s necessarily wrong to do-we just were upholding an image that we all wanted to be proud of.”

Drawing Excellence from Faith and Family

Mitchell McGinnis, the Junior High Choral Director for Jackson Prep, has played piano for Reveillon for three years. He believes the showchoir program serves as training for leadership roles, where students learn respect and humility. He notes that Holbert has been “a shining light and strong mentor” for students since her arrival, and she has developed a program that suits students from all backgrounds and with a wide variety of personalities, bringing them together in something that goes far beyond a show choir and instead represents a “continuously growing family.”

Maret Watson states that, through Reveillon, Holbert has changed lives and influenced children in powerful ways. She adds, “I know the performing arts program at Prep has transformed my children’s lives. My children have been blessed to be at an outstanding school in which their minds have been nurtured through demanding academia, and their hearts and souls have been nurtured through their participation in Reveillon.”

Similarly, Connie Wegener is proud of the “family and faith based program” at Jackson Prep, where the children look to Holbert as “their leader, friend, and encourager.” In fact, Holbert feels as though she benefits from that bond as much as the students do. She explains that being part of a show choir “built on faith” means they have the opportunity to “pray for each other, encourage, and support each other in all things.”

For instance, when Holbert was dealing with her mother’s diagnosis of pancreatic cancer and her death only two months later, she recalls that she could not have made it through such a difficult time without her students’ support; surprisingly, that very hard year somehow even turned out triumphant, with the choir bringing home a national championship from the FAME competition. She shares, “It was such a hard time for me, and my students lifted me in prayer the entire time. With that experience I can say that we indeed are a family.”