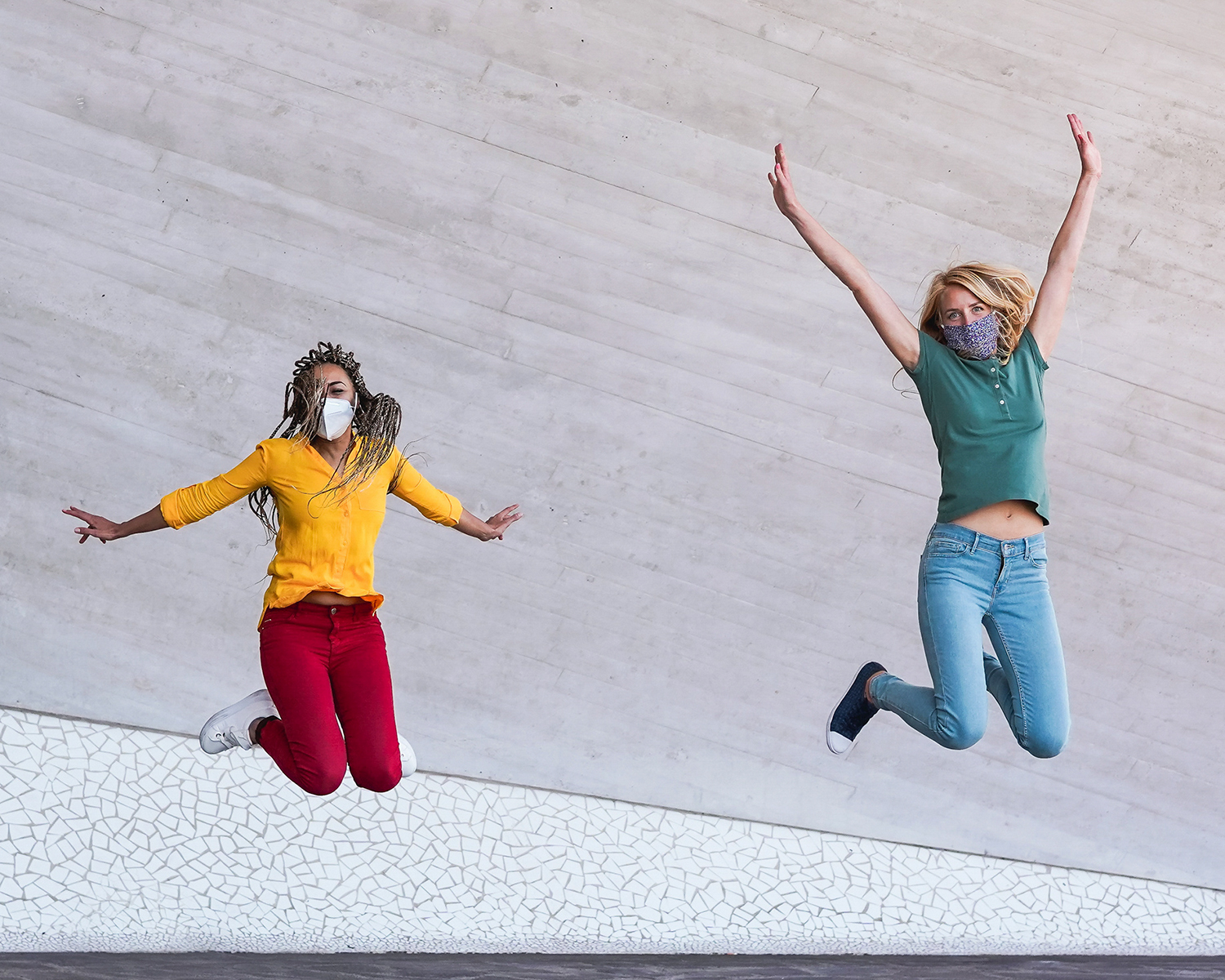 Share
Share this:
Digital
PDF
Issue
2020 has been a rough year, to say the least. Not sure if you’ve heard, but there’s a little virus going around, and it’s really putting a hitch in my giddyup, as we say in the south. I find myself trying to figure out my place in all this chaos. I find myself fervently wishing things were different than they are. I have a five-year-old son, and I want to make sure he still sees joy every day and feels love and happiness, even when his dad and I are full of frustration and doubt.

Well, I just so happen to be a former show choir kid (holla, Attaché!) and I know I learned lessons back in my day that could probably help me now. Let’s take a little trip down Memory Lane, shall we?

For starters, I will never forget my first full Saturday of choreography rehearsals. Hello, Nervous Breakdown. You want me to what now?? Did you say double or triple pirouette, because either way, the answer is still nopity nope nope nope. Total. Chaos. I was desperately trying to learn the steps, learn them quickly, learn them correctly, and not cry in public. I kept thinking if I could just see the big picture somehow it would all make more sense, but the only way around it was through it. Why am I so out of breath? How am I supposed to sing while doing this? Why does this guy keep hitting me in the head? I prayed for invisibility. I just knew everyone else was getting it and I, alone, looked like an injured duck waddling and flapping about.

I felt extremely similar to this recently when it came to my son doing kindergarten online. How does this work? Am I doing it right? Am I doing it wrong and everyone else is doing it right? At least, in this scenario, I could cry all by myself in my living room, but the feelings of chaos and frustration were the same. But you know what? That first all-day choreography rehearsal was a nightmare, but I got better. And by talking to my friends, I realized that everyone pretty much felt like they were doing it wrong; and let’s be honest, we probably were. It was a brand new challenge for us and we were given time (and some grace) to practice and get better. I was my own harshest critic, and I needed to give myself a break. So whatever is going on with you right now, just take a deep breath, and go easy on yourself. This is our first global pandemic. This is Competition Set Level Choreography. We’re gonna need more practice.

Next is a funnier (although just as traumatic) memory about wishing you could change things with the snap of a finger. One day, my Sophomore year, we had a performance at a banquet of some kind in the middle of the school day. I had come to school in my show choir clothes and brought a bag with the clothes I would need to change into when we got back to school. Show went great, we got back to campus, and everyone went about changing. I dug through my bag and was horrified to realize that I had not brought a bra. Now, I’m not gonna lie, I was 16 and hadn’t really “filled out,” as the saying goes; I was still pretty flat-chested and painfully aware of it. We had strapless bras built in to our dresses, so I didn’t realize my mistake until it was time to change, and the bra in my dress was completely sewn in. I shyly went and knocked on the director’s door and asked if I could use her office phone. (Yes, children, I am of an age where we did not have phones in our pockets all day in school yet.) She asked me why, and I quietly whispered, “I need to call my mom, I forgot to pack a bra to wear today.” She smiled at me and said, “Well why didn’t you just say so?” And then she stood up, stuck her head out of the door, and asked the entire show choir, including all the cute Senior boys, “Does anyone have a couple of band-aids? Angie forgot her bra.”

(Moment of silence for my dignity.)

I was horrified. I wanted to disappear. If a hole had opened up that very second into some weird parallel universe or hell dimension, I would have gladly jumped into it and taken my chances with whatever was on the other side. Poof. Just gone.  I would have rather faced actual demons that leave that office and face the raucous laughter I could hear on the other side of that door.

There have been a few moments lately that have made me want to shut my eyes and be anywhere else doing anything else than standing here, confronting something I didn’t want to confront, such as the ways this virus has changed our lives.

The day I found out my son’s Pre-K 4 year was simply over was one. There would be no tiny graduation caps and gowns, no sweet little programs for me to bawl through as I took 10,000 photos that I would one day show to his significant other to embarrass him, or maybe share at his show choir Senior Banquet. No hugging his precious teachers and crying as I told them how much they meant to us and giving them some small token to remember my sweet boy by.

The first time I found out someone I knew and loved had been taken from us by this virus. Here yesterday, and today, no longer. No chance to say goodbye. No funeral to attend.

My first day back at work, worrying that everyone who walked in could possibly be lethal to me, which broke my heart, because I love my job and my clients, but I was terrified of getting sick and even worse, getting my family sick. That one moment of fear where there should have only been joy at seeing an old friend and doing something I love.

But I did leave that office, I laughed with everyone else, like it was hilarious (and honestly, it really was) and life went on. My mom brought me a bra, the world kept turning, and I bet there’s not a person on this planet that even remembers that happened except me. Sometimes, life puts you in a position to either slink away or shine. If there’s one thing a show choir kid knows, it’s how to shine.

This leads me to my final lesson, “The show must go on.” Or as I like to put it, “The joy must go on.” Once, we were competing in Disney World, it was my Senior year, and we were pretty much the choir to beat. We had rehearsed. We had put in the hours, soooooooo many hours. We had already competed in other competitions and won! We just had to do our jobs, individually and as a whole, and that last title was ours. Our big send-off. We had to win; there was no room for mistakes. So, if I were to tell you, that on the very last song, after about an 8-second quick change, we went from blue dresses to red dresses in the blink of an eye, and in the midst of the aforementioned double (or triple?) pirouette, it became blazingly obvious that a dancer on the very front row had forgotten to change her bloomers, and was now flashing royal blue undies in a sea of nothing but red, red, red?

That dancer was me.

The thing you need to know here is that I didn’t even know: I had zero idea. I was just up on that front row, exuding confidence and executing the steps the way I had a million times before. If I had known, I don’t doubt at all it would have changed my performance. I would have been worried and distracted and probably missed some steps, and that is the sort of screw up that can lose a title. I think it was my mom who told me first, after we came off stage. Talk about wanting to disappear. But I think it was the attitude that saved me. It was a mistake, for sure, and we probably lost some points, but we still won the competition. I have a great picture to this day of me, in my red dress with my blue bloomers, wearing a gold medal. Everything turned out okay, in spite of my mistake.

The lesson here is that yes, we are all going to screw up. The pressure is on here lately to do everything right, and I am going to make the wrong decisions, I am going to make mistakes, I am going to forget to change my metaphorical bloomers, I assure you, I will not forget to change my actual ones, and things won’t turn out perfect. If I had known at the moment that I had made a mistake, that one mistake could’ve easily led to five more. So I’m glad I didn’t know. Am I screwing my kid up by keeping him home for kindergarten? Am I driving my husband crazy worrying about this virus and making sure we have 150 masks clean and available at all times? Am I losing “friends” on Facebook because I constantly post Covid statistics? (Okay, that last one I’m not actually very worried about, to be honest.) But the bottom line remains the same: I. Don’t. Know. Just like I didn’t know about the Blue Bloomer Debacle until after the fact. And if I knew for a fact I was screwing up, it would probably just lead to even more screwing up. So I’m just gonna think back to those years on stage with my friends and smile, give it my whole heart and soul, and keep dancing.

About the Author
Angie Carnathan is just one of those kids that probably didn’t live up to her potential, but she’s coming to terms with that.She writes to stay sane. She has a lovely husband, a brilliant and adorable child, and three terribly-behaved dogs.
Read more from this author
Share
Share this:
Digital
PDF
Issue
More in Music