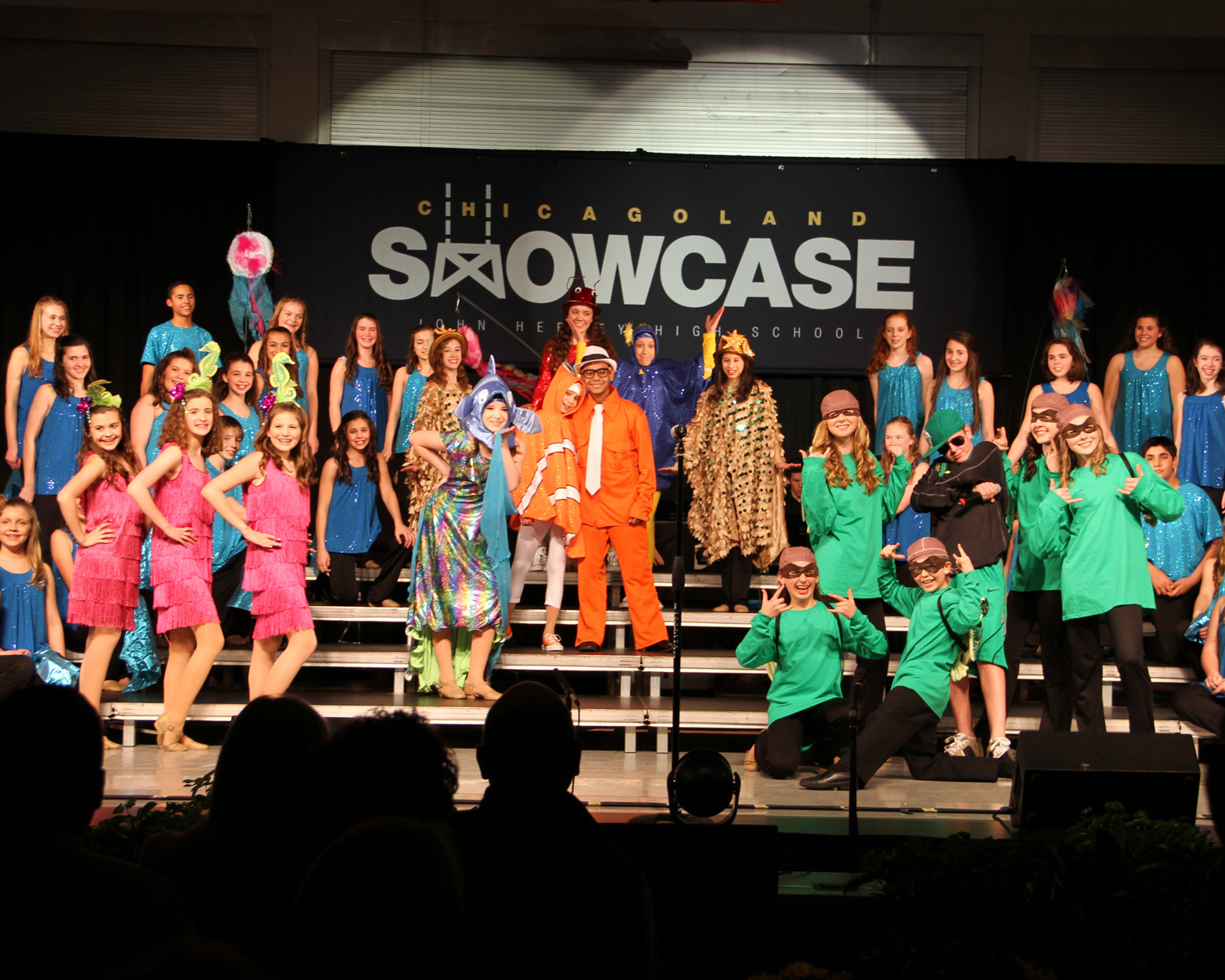 Share
Share this:
Digital
PDF
Issue
CADENCE from St. Isaac Jogues Catholic School in Hinsdale, Illinois, is special for several reasons: They are non-auditioned and self-sustaining, yet they still participate in three competitions a year.

In addition to other honors, they were given exclusive permission to arrange and perform a medley from “Finding Nemo, The Musical” from Kristen Lopez and Bobby Lopez (composer of Book of Mormon and Avenue Q).

The only criteria for guaranteed acceptance into CADENCE is regular attendance and being enrolled in choir the previous year. As a non-auditioned show choir, they currently have 75 performers in the group, which doesn’t include crew. With middle school enrollment of around 225, they are by far the largest extra-curricular activity at St.Jogues. Every other year, CADENCE takes a performance trip to Disney World through Disney Performing Arts. They also host a “Yay for Everybody” middle school show choir workshop called “GOT TALENT,” where clinicians work with guest choirs to prepare for their performance season. They end the day with a showcase performance.

Donna Coffey, the parent of a Cadence member, has five daughters that either have gone through CADENCE or soon will. Donna explains that CADENCE has been a big part of their family since her daughter Lauren was in third grade and her daughter Grace was in first. Donna notes, “We were a musical household. I love to sing and my husband, John, is a fabulous pianist and guitar player. This afterschool activity all of a sudden became our main thing!”

Coffey notes that CADENCE teaches kids responsibility and confidence, and another CADENCE mother Kirsten Legner agrees, adding that she believes her role as a Show Choir parent is to “make sure her daughter fulfills the commitment she made to Cadence but to still give her the flexibility to have her own successes and failures with it to best learn.”

Current 7th grade CADENC E member Abby Legner notes that some of the practice sessions are late on school nights, and there are usually other club meetings to fit in as well, so they have to balance a lot on a tight schedule. Abby notes that difficult decisions have to be made, and she realizes she might have to give up something to keep her grades where she needs them.

Fellow member Katie Bourjaily agrees that the biggest challenges for many of them are the long choreography practices that usually end late. She says those practices are tiring and require a lot of focus and work. “I try to help everyone get through them by trying to always be energetic and focused. As an 8th grader, being a leader helps the younger kids know how to handle the downside.” Abby—who has little tolerance for younger ones who aren’t giving their all—adds, “If you’re not giving 100% when you are performing then you really need to leave the stage or work until you are giving 110%.”

The other downsides, as remembered by former member Ryan Lowe, are just a few stressful moments—making sure he had his costumes in the right spot or worrying about perfecting a solo. “But in my eyes,” Ryan adds, “once you hit the stage and those bright lights blind you, you sort of forget how to be stressed and give it your all.”

Financing can also present challenges for the Show Choir families. CADENC E is financially self-sustaining through tuition and fundraising, and the school does not provide any funding for the choir program. When Donna Coffey’s third daughter—Colleen—started Show Choir, she jokingly asked

for a “Frequent Flyer” discount. “It is a commitment financially as well as time wise,” Coffey adds, “but it is so worth it! ” Coffey shares a memory of seeing the kids on stage the first time they traveled to Disney. “I had two, maybe three girls performing. My parents drove over from the East Coast and we all had tears in our eyes! What an experience they were having…Disney, being on stage, going behind the scenes. These are things some kids can only ever dream!”

Though parent Mike Lowe agrees that Show Choir participation is “not inexpensive,” he adds that it’s a similar commitment to other sports or activities their children have participated in. Kirsten Legner adds, “Thankfully for us, the financial cost is manageable and I think the long term benefit Abby gets from this experience makes it worth it. She is more confident with herself, understands working as a group better and loves being a part of something that is bigger than herself.”

Ryan Lowe, a former CADENCE member and currently a senior at Hindsale High School, remembers many things he enjoyed about Show Choir, but what he recalls most fondly are competitions. “Competitions are so much fun and where your choir really comes together to perform at their best,” he notes. “If you are lucky enough to have your team called up as the ‘Grand Champion’…well the pictures, craziness and bus ride home are something that I will never forget. Blasting music, singing so loud, tears of joys, and just enjoying this amazing moment with some people you will never forget.”

Similarly, former member Andrew Hipskind also reports his favorite memories were of various competitions and performing in Disney. Katie Bourjaily is a current 8th grade Cadence member who has been part of the choir for five years, and her experience with competitions is equally positive. Katie sees competitions as the best part of Show Choir, where all the hard work pays off when on stage. “You get to show off what you’ve been working on for so long and just sing your heart out. It is the best feeling ever!”

Katie also notes that as an eighth grader, younger choir members look up to them, so it’s their job to be the leader of this “one big singing, dancing family.” Katie adds, “I’ve learned that everyone in the choir wants to do their best and that every single member tries their hardest when singing and dancing, even if they struggle a bit. Andrew remembers a lot of hard work in the beginning with several hours of choreography and learning songs, but agrees—with the others—that it was all worth it in the end when they knew they performed well in competition.

Abby has also most enjoyed the “feeling of being a family.” Abby notes, “Even with over 70 performers, you really get to know everyone.” Abby also explains that teamwork is crucial, noting that being judged on how well the performers stay together while singing and dancing means they “have to trust that the rest of the group is going to really try to be perfect and synchronize with the people around them.”

Former member Ryan explains that he joined the Cadence show choir in 3rd Grade and before that, the only singing he did was with my family…in the car, at home and in church. “I didn’t know how much fun it could be,” he notes, “but once I got the ‘bug’ I never looked back. I have never had as much fun and had as much of a connection to any type of group as with the kids I performed with in Cadence.”

As parents without prior Show Choir experience, Mike and Karen Lowe were surprised to see how big it was and how well their children performed. “The first time we saw our oldest, Ryan, get up on stage at the high school we were obviously a bit nervous,” Mike recalls. “The auditorium was pretty full and he was in 3rd grade. He had never performed in front of an audience, so we were not sure what was going to happen.”

Six years have passed, and they have watched their children perform in Cadence and now Chicagoland Ambassadors; Mike and Karen have become regulars. “As a parent, it helps to love music,” Mike adds, “but I couldn’t be more proud of either of our children. They balance their school work, sports and choir schedules, which is no small task. And to hear and see them on stage is very special.”

Andrew Hipskind praises the overall Show Choir experience for teaching him confidence and to always give his best at whatever he tries. Andrew also recalls that Miss Julie’s determination is what would drive Cadence members to reach their goals. Parent Donna Coffey adds, “No matter what, a child leaving the stage for an outfit malfunction or something else going on with a microphone…all you see from Julie is a smile and a very calm demeanor. We are truly blessed to be a part of this very extraordinary group lead by an amazing woman.”

Additionally, Mike and Karen Lowe both note how they have watched Julie over the years and seen her continually bring out the best in the kids. “Though I am sure it has its ups and downs as working to bring 40 some odd kids together couldn’t be easy for anyone,” Mike says, “she has always kept her kids focused, united and positive.” Kirsten Legner adds, “Julie is extremely talented and loving and has an amazing ability to bring out the talents in our kids. She is giving them skills and confidence that will last them a lifetime…which is priceless.”

Finally, eighth grader Katie adds her closing thoughts on Miss Julie and CADENCE: “Not many people can get 70+ sixth-eighth graders to sing three-part harmony on the first day of rehearsal. She spends so much of her time planning our show to make it the best possible show. She will always push us to do our best, and in the end—let’s face it—we’re totally AMAZING! ”