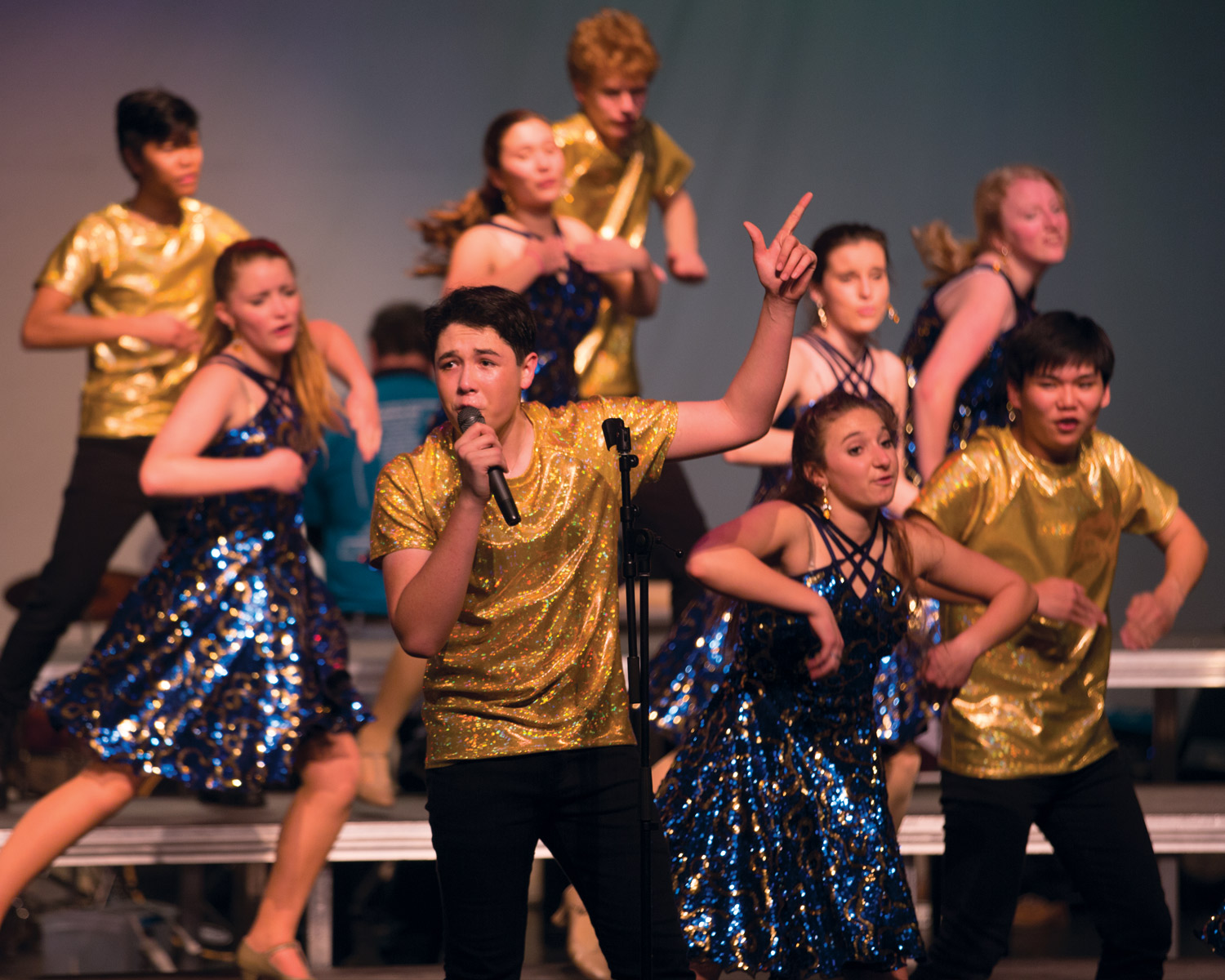 When he first joined the school, there was a show choir but they were struggling. Before Sluyter came on board, a dance teacher at the school wanted to create something similar to show choir, but neither the teacher nor students realized how hard it would be to build a program from scratch. Even after he took over, Sluyter adds that it took a couple of years to get the administration “fully on board with this particular animal,” but that it’s been “very exciting here to see how the kids have grasped onto show choir.”

Six years ago, when they made a dramatic change to the existing group, basically starting from scratch with only eleven students, they used The King’s Academy mascot for inspiration and called themselves  Knightshine. Sluyter is also incredibly pleased that his choir, while much smaller than most SoCal choirs, is able to perform and compete at the same level of much larger groups because “the school supports the Fine Arts program so strongly.” He also knows how fortunate they are to not have to “fundraise constantly,” thanks to the strong parental support at TKA.

As the director of a show choir at a private, Christian high school, Sluyter wants to do more for his students than academic mentoring and musical training. He acknowledges that even children at a Christian private school are highly attuned to real world problems. Sluyter explains that this year he wanted the competition show to be designed around a theme that addressed issues the choir members had been facing: destructive behavior and addiction. He notes, “A former member who had to drop out of the group is continuing to struggle with her eating disorder and, of course, the issue of a former member who was battling some psychological issues and committed suicide last year is still fresh in students’ minds.”

“There are all those hidden things that kids are struggling with,” he adds. However, what he noticed is that other choirs and their work recognized the struggles, and the angst, and the challenges-but rarely if ever provided a resolution, something hopeful.

“So many choirs tend to end up kind of dark,” he explains, “so what’s the answer, and where’s the hope?” He wanted to deal with shows and sets that were willing to examine the darker parts of our nature but then would lift us up in the end. That’s why Sluyter is unafraid to deal with “everyone’s dark side and ways we cover it up”-because his sets always emphasize moving past those dark realities and into the light.

In the show choir’s most recent “advance,” which is what they call their “retreats,” a semantic nuance that emphasizes they are always moving forward, he had the kids design butterflies and write out goals and prayers for the year on their creations, with the idea that they were encased in the “cocoon of the music room” and would ultimately end a semester with students able to “spread your wings and fly.”

One of the most often repeated words in testimonials about Knightshine is the word “family.” That notion of family within the group dynamic is both real and symbolic. Sluyter’s wife Marcia, who loves to sing, teaches at a preschool on the same campus -so it’s not uncommon for her to spend her lunch hour in the music room doing costume measurements. Their son, Joel, has also been an active part of developing Knighshine since its inception. Of his son, Sluyter shares that Joel does an excellent job of helping them tell a story and he feels very blessed to work with him on a regular basis.

Joel studied dance and choreography at New York University’s Tisch School of Arts. Soon after moving to LA to work on shows and videos, Joel discovered a love for teaching and working with kids at studios and various high schools. Now, in addition to serving as the Director of Performing Groups and Director of the dance team Voltage at the Palos Verdes Performing Arts Conservatory, Joel continues to work with Knightshine. Joel proudly adds, “They came from not even knowing what a show choir was to winning 1st place trophies within a couple years.”

The concept of family goes far beyond the boundaries of the Sluyter household though. Steven Cannon, a 2014 singer and crew member, states, “Every person involved becomes a brother or sister of all the others, and those are bonds which extend beyond high school.”

John Khouri, from the class of 2013, explains that he went from having no meaningful friendships to having a family with Knightshine. He believes that God used the rehearsals, classes, and competitions to teach him lessons in humility, teamwork, courage, and patience. Recent Knightshiner Sami Glenn calls Knightshine something priceless because, as a family, she believes they are “bound together by a deep love of music and an ultimate purpose to share the message of Christ’s love to other choirs who watch us perform.”

Cassie March, from the class of 2012, explains that the Knightshine family rallied around her when she faced medical problems. Similarly, former member Kayla Geleynse learned the blessings of a community where they all could laugh, dance, pray, cry, and grow in their relationships, all while gaining self-confidence and self-love.

Graduate Kara Kim notes that while many may associate show choir with “cheesy singing and dancing…and a whole lot of ego,” she believes that singing and dancing together in harmony “strikes a chord in the heart,” and she still recalls the power of that camaraderie. Former member Wesley Friesen adds, “One cannot join Knightshine and not leave a changed person. The people and the choir infect your soul and turn you into a sequin-loving jazz hand-hitting dance-breaking machine.”

Recent member Josh Edmondson believes that the cohesive family unit created in Knightshine is, in part, a result of competitions that are forcing choir members to form bonds by relying on each other.

Unlike in the Midwest, where students can find any number of competitions by driving an hour, Sluyter and his students face a six-hour drive to participate in any competition. Even more important than the relationships built among members, Edmondson believes, are the effects the choir has on outsiders to the group when they travel to competitions.

“Competitions are Knightshine’s true chance to be a ministry,” Edmondson explains, “a chance for Christians to overtly spread God’s Word.in an engaging and impactful sort of way.” In fact, Edmondson sees Knightshine’s unique role as a Christian show choir to Photo by Jeff Cuyle be a “powerful and vital tool of Christ.”

Parent Margaret Copley explains that the competitive angle offered by Knightshine is amazingly intense and powerful. Copley believes that anxiety management, attention to detail, and reliance on hard work are just a few of the lessons learned by students when they deliver their performances. Parent Stacy Pena has been delighted to see her daughter become, for the first time, part of a competitive team-and has proudly watched her work consistently at difficult tasks. She adds, “For the first time in her life she’s experiencing the benefits of camaraderie, teamwork and hard physical and mental work, as well as the benefits of losing and winning.”

Travis Mercante, another former member, adds that he believes God spoke to him through their songs and through the group’s willingness to be vulnerable as individuals and as members of a community. He explains, “None of us were perfect in any means, but God was glorified through our common brokenness as we came together as a community determined to exalt his name through song and dance.”

Brendan Copley, who recently graduated, believes Knightshine provides students “the perfect outlet for spirituality, creativity, artistic ability, team building, leadership, and fellowship.” Copley believes the competitions offered students “opportunities for ministry” far beyond typical service trips. “The opportunities for ministry at the actual competitions are almost constant, and extend well beyond our actual show; since discussion of the content of a set (show) in the show choir world is akin to discussing a team lineup for a sport,” Copley explains. “We had constant opportunities to share the Gospel as people asked us about our set.”

Elsie Soderberg, another recent graduate, believes God used Knightshine in her life in powerful ways, while He also used them to work in the lives of the listeners as well. She adds that the choir was always about more than singing and dancing, and that witnesses to their performances were moved by the spirit.

Former member Kristina Hsieh adds, “We are all strangely connected by a shared love of singing, dancing, and giving glory to God. I loved that our set lists are always surrounding the gospel. There’s something beautiful and fun-loving about sharing the gospel at competitions in the form we have battled so strongly to perfect, but in the end, giving it to God and trusting that He’ll make the outcome wonderful.”

Ultimately, Sluyter finds the Christian angle one of the most exciting aspects of the group. Former student John Khouri shares, “Through Mr. Sluyter’s sermons, I learned the importance of representing God to the world, listening to what God has placed in our hearts, and loving those God puts us in a position to love.”