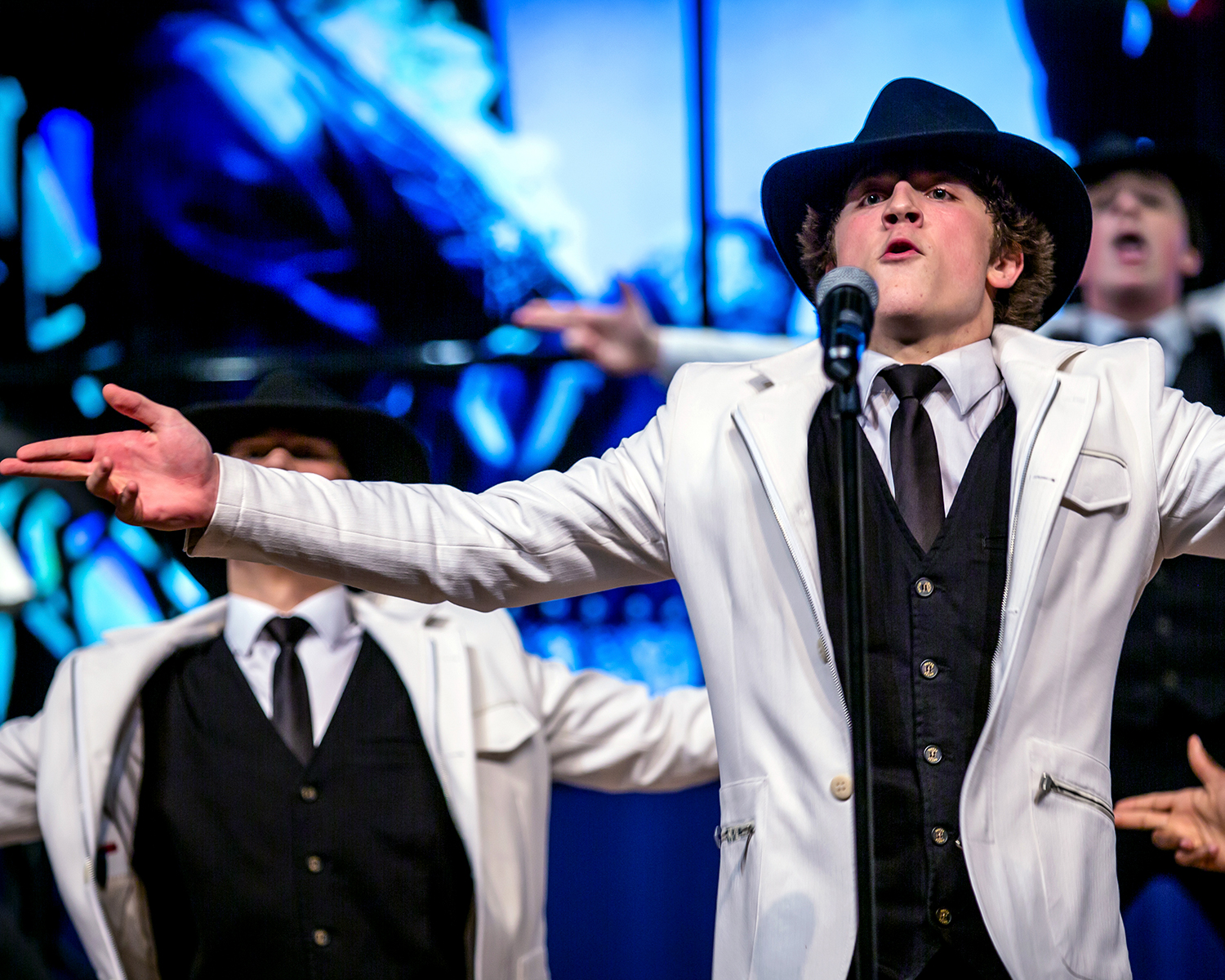 Share
Share this:
Digital
PDF
Issue
Show choirs come in many sizes and styles. They all have one thing in common, however: an audience who wants to hear them. With that expectation comes the challenge of overcoming a live band or mixed tracks, as well as some not-so-acoustic-friendly rooms.

It is a shame for a choir to do months of rehearsal and for an audience not to be able to hear their performance. So the question these days is not so much, “Do we need to mic the choir?” but instead, “How do we mic the choir?” The answer to this question can and does vary, so let’s look at some of the common methods as to what works and what doesn’t.

Show choirs are, of course, particularly challenging because of the combination of singing and choreography. Unlike most choral groups or church choirs that are stationary and limited to one area of a stage or platform, show choirs typically can make use of the entire stage. Add a live band, and the proper use of microphones can be a mystery. In fact, at most regional and national competitions, there is a live instrumental accompaniment, which is typically louder than recorded tracks. The Show Choir National Championship Series (SCNCS), according to www.showchoirs.org, actually levies a penalty for using recorded accompaniment. In miking this type of performance, one of the first decisions is whether to use wireless or wired microphones or—more than likely—a combination of both.

Wireless, Wired, or Both?

One of the biggest challenges is trusting the “blend” of the choir to the mixing ability of a sound person. Choirs are made up of basses, baritones, tenors, 1st and 2nd altos, and sopranos, and they each have their unique part to sing. One of the duties of a good show choir director is to teach the performers how to blend their voices, how to listen to each other, how to express dynamics, and how to harmonize. All choirs have some singers who sing soft, some loud and some who may not be in perfect pitch. So, rather than relying on massive moves by a sound engineer to balance the mix of voices, microphones should ideally be utilized to “capture” the choir’s natural blend. This dynamic challenge is why using wired microphones to mike multiple voices at a distance, along with a couple of wireless microphones on stands for soloists, is highly recommended; it is also more affordable.

There are two types of wired microphones commonly utilized today: dynamic and condenser. The choice between a dynamic or condenser mic is typically dictated by the distance to the sound source. Dynamic microphones, like the Audix OM2 or Shure SM58, are commonly used for wired, handheld vocals. They are also effective on a stand for miking soloists. They are rugged and generally less expensive than condenser microphones.

A condenser microphone, however, is better suited for distance miking or capturing a larger area, such as a show choir, because of their higher sensitivity and output. Condenser microphones require phantom power—provided from the mixing board. They are also more delicate and need to be stored properly and kept away from moisture.

To determine if a microphone is a dynamic or condenser, turn off the phantom power at the mixer (there will be a button labeled “phantom” or “48volt”). Make sure that all volume faders are down before doing this. If the mic only works with the phantom power on, it is a condenser. Engaging phantom power will not damage dynamic microphones.

For many years, theatres have used boundary mics—low profile flat surface microphones—on the floor, typically positioned downstage by themselves or in tandem with hanging mics positioned upstage. When using a boundary mic, stagers should always use a unilateral direction pattern, either Cardiod (heart shaped) or Hyper-Cardiod (tighter pattern on the sides). A unidirectional pattern will help to reduce feedback and restrict audience noise from entering the sound system. Additionally, stagers should always place foam or a piece of felt beneath the boundary mic to help minimize foot noise from dancers. If a show choir has very intense dance routines, there may be too much foot traffic picked up even with foam or felt beneath the mic.

Hanging condenser microphones can also be effective. The biggest mistake when miking a choral group or choir is in using too many mics, which can contribute to increased feedback. A good condenser mic will be able to cover up to twenty stationary people. However, a show choir of twenty will typically cover twice as much square footage as a stationary choir. Even with a smaller show choir of fifteen singers or fewer, two or more microphones will be needed. Despite this limitation, use the least number of microphones and maximize their coverage. Imagine a 60° cone emitting from the microphone; the best coverage is within the imaginary cone.

When equipping an area with multiple microphones, stagers should take care to avoid a phenomenon known as phase cancellation. Since sound travels in a wave, two microphones amplifying the same sound source can be hit by the same sound wave but at different intervals. The positive wave from one signal can cancel out the negative phase of another signal. The usual result is a dropout of certain frequencies. This situation is referred to as “comb filtering.” To avoid this issue, stagers should always utilize the 3:1 rule: Multiply the distance of the sound source, or singers, to the microphone by three. Simply put, that is the distance the two microphones need to be from each other.

Stagers will need to determine whether mics will be hanging from above or placed on the platform. If hanging the mics, there are many manufacturers to choose from. Today’s show choirs, however, perform in many different rooms, so hanging microphones are often not an option. A good alternative is to place condenser microphones on stands. Since many show choirs are on risers, one of the biggest challenges is getting the microphones high enough to adequately pick up the higher rows. For example, Audix makes a very low profile 50″ or 84″ carbon fiber boom arm-MicroBoomT that utilizes the M1250B miniature condenser or higher output M1255B. The MicroBoom attaches to a standard mic stand. This product is a unique solution for show choir miking when seeking a low-profile, high-reach solution and flexibility of placement.

For the past six years, we have been hired to do sound for show choirs in our region. It has been difficult to get the vocals out in front of the mix. We have learned from other sound companies that they, too, experienced the same frustrations. Most show choirs we encounter perform with drums, keyboards, amplified bass, and guitar. We recently tried the Audix Microboom utilizing the M1255B high output Micros series condenser with a shotgun capsule. The shotgun capsule has the enhanced ability to capture sound from a distance, and it allowed us to place the mic four feet in front of the first row of singers but still capture the back rows. We also have found that the slender low profile look of the MicroBoom actually gets lost from the audience’s visual perspective. For most show choirs up to 24 voices we typically set up the shotgun mics 6 feet in from the edge of the choir on a 24-30’ stage and 4’ in front. We set the mic height at 7-8’, angled in slightly from the sides to capture half the singers with each mic. In short, we have been amazed with the results. We also supply two or three Audix OM3 wireless units on stands for soloists. For larger performances, we are using three or four MicroBooms across the front. In these situations, we run every other microphone “out of phase” to minimize phase cancellation.

A Word about Monitors

Microphones should be placed behind the main speakers. If they are, and feedback occurs, the source of the feedback is most likely the monitors. Rule number one: Do not put the choir in the singer’s monitor mix. The monitor mix should only have the recorded track or the instrumental accompaniment. Sound engineers and choir directors need to hold fast to this rule despite requests from the performers to hear themselves in the monitor mix.

Feedback is simply a microphone picking up itself from a speaker. Therefore, if the live mic is not in the monitor mix, the chances for feedback are reduced, and the ability to gain up the mics in the front of house mix is greatly increased. The goal is to have the singers project as much as possible and to listen to each other. That being said, live musicians must understand that they are team players and that it is important to keep the stage volume down in order for the singers to better hear themselves on stage. Also, unlike the singers, instrumentalists do need some kind of choir mix in their monitors. Stagers need to make sure that the band monitors are positioned away from the live microphones. Singers and instrumentalists should be encouraged to go out front during a sound check to hear the positive results of teamwork and compromise.

Not all venues are created equal; room acoustics can vary greatly. Compromises may need to be made at times, as performers may not hear exactly what they want in a monitor, or an instrumentalist may want to play louder than is necessary. Make sure that the choir director, singers, and instrumentalists are all on the same page and that everyone is working as a team to achieve the best sound and performance as possible.

About the Author
Gene Houck is the National Sales Manager for Audix Corporation. Celebrating its 28th year, Audix manufactures a broad product line based on high-quality professional microphones. For more information, visit www.audixusa.com
Read more from this author
Share
Share this:
Digital
PDF
Issue
More Articles for You

10 Reasons to Hire a Tour Operator For Your Performance Trip

Going Beyond the Score: How to involve your instrumentalists in the important task of adapting the music as your show evolves.

Developing a Successful and Relevant Website for Your Show Choir