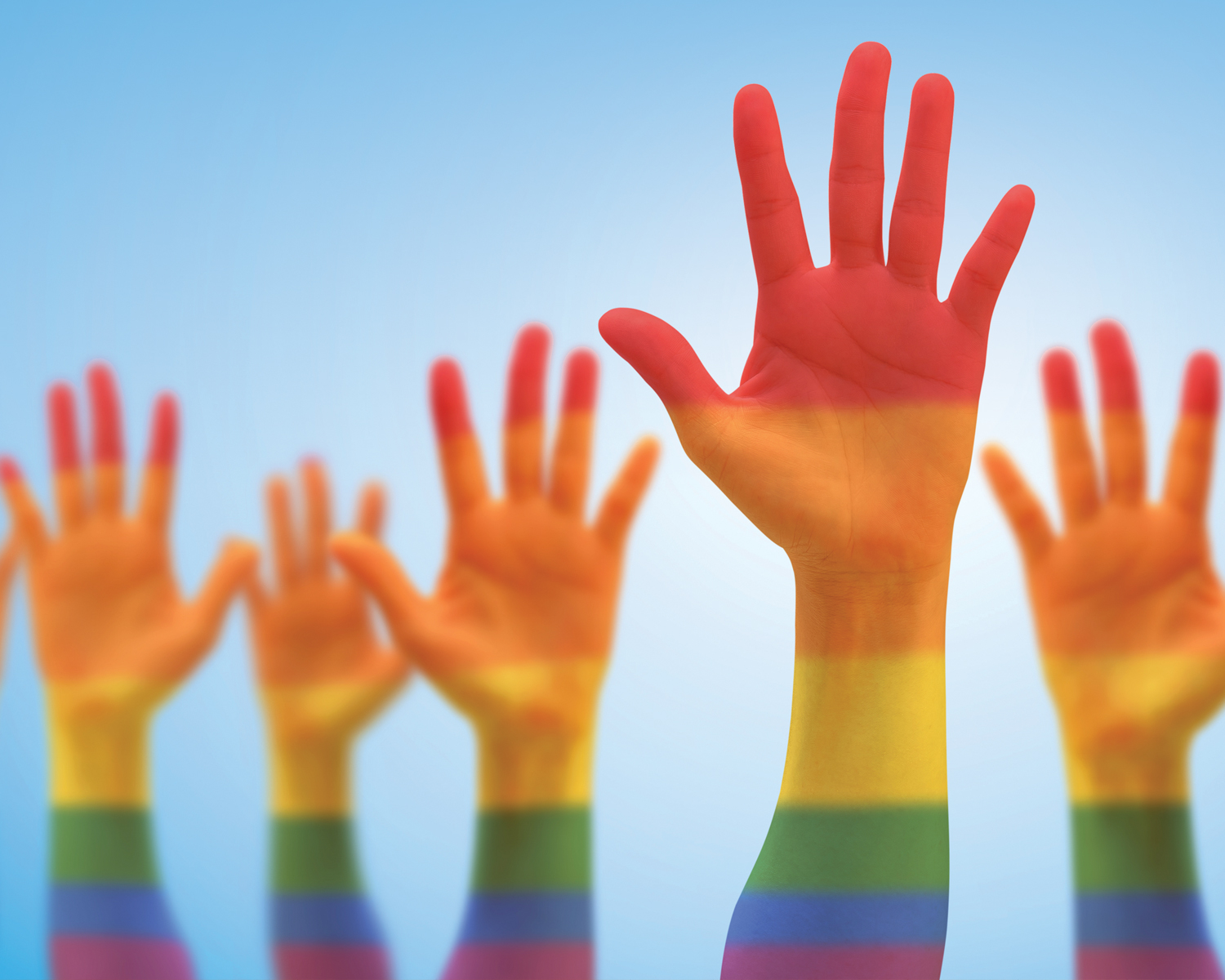 Share
Share this:
Digital
PDF
Issue
High school can be tough. Being queer on top of that can seem like a nightmare at times. I know this from experience. As a student in Opelika Ovations from Opelika, Alabama, nearly a decade ago, I remember being terrified of coming out as gay.

Being gay in a small town had a lot to do with my fear, but people have changed a little since 2011. People are more accepting with each passing day. My director was accepting of everyone who walked through his doors. I know that many of my classmates would speak up if anyone really tried to bully me. I was still terrified of being my true self.

Making it Safer to Be Yourself

I was never fully out of the closet in high school. I remember the sweaty-palm feeling when someone would ask if I was gay. My prompt response was always “no” for fear of being looked at differently. In hindsight, the truth is that those who matter would not have cared.

But in show choir, where flamboyant and campy makes a performance memorable, I was terrified to be exactly that. Looking back, it makes me wonder what could have been done to make me feel safer to be myself. After reaching out to others about their experiences, I think I have a few ideas.

I was approached from someone who attended a Christian School in the Birmingham, Alabama, area. I was asked not to disclose the identity of the person or school, but they are a straight ally to the LGBTQ+ Community, and their insight was too important not to share. “I had no worries for myself (as I identify as straight), but an LGBTQ+ student would have been expelled, at least according to how the handbook read, when I was in school. I never knew anyone to be expelled for it, but all the students I knew who were part of the LGBTQ+ community left to go to other schools by their own accord because they felt they could not express themselves. I also know a student who hid it until he went to college for fear of expulsion and persecution.” Imagine going to school where you would be expelled for being the person you were born to be.

Uniformity expectations within show choir can also pose a few issues for LGBTQ+ students. It’s generally expected that girls in show choir have hair long enough to flip, and they are usually required to wear a dress. Hair and costuming can be key pieces to the puzzle when it comes to putting together a show. However, the notion of requiring students to have a certain hairstyle or dress a certain way according to their gender assigned at birth can be problematic. Haley Blazek of Marion, Iowa, notes: “In high school, I was part of the hair and make-up committee (for show choir) we even signed a contract that said we would consult our director before any haircuts or colors between the audition and the end of the season.

Due to the goal of conformity in your ‘classic’ show choir shows, and in so many aspects of show choir in general, gender-nonconforming folks have to face the difficulties of following very specific gendered standards. Girls have to have long hair and wear dresses; guys must have short hair and wear suits. In high school, I didn’t understand the dysphoria that could create for people.”

Enforcing these gender norms and expectations can cause more than surface level damage. It can mentally wound a person. Blazek continues, “Show choir has always been one of the most accepting groups I’ve ever been part of. It also advertises itself as very LGBTQA+ inclusive, so it makes absolutely no sense for there to be such an emphasis on gender conformity. Yet, here I am, feeling as though I may not be accepted. There is absolutely no reason for this. Do these things play a role in our scores at competitions? Because if they do, that’s ridiculous. I promise you, the length of my hair has no impact on how well I can sing or dance alongside 40 other people.”

Some schools have policy in place to prevent issues dealing with negativity specifically for LGBTQ+ students. A student from Madison Central High in Mississippi claims his choir is very inclusive and tolerant. “The interesting thing about our show choir (and I wouldn’t be surprised if this were the case for other southern show choirs) is that there is a zero tolerance for hazing in any form.

These guidelines are set for many show choirs, and we even signed a “contract” among other things, agreeing to love and appreciate our differences. No individual is isolated for any reason. And despite our State’s legislature, you’ll find that most show choirs are extremely progressive,” says Bradley Davis, a senior at Madison Central. It’s good to know some things have changed for the better, but some things are still the same. “We’re a family and the only thing more important to us than being good, or winning a championship, is respecting each other.”

Show Choir Teaches Love of Self and Love of Life

Personally, show choir has taught me a lot of things. It helped me break out of my shell. It taught me how to move my awkward body and about stage presence. It taught me to love myself. I owe a lot to my show choir experience. Show choir even brought me the love of my life. As a member of Opelika “Ovations,” I regularly came in contact with most show choirs within a 6-hour radius during competition season. This list would include the likes of Auburn “Varsity Singers,” Enterprise “Encores,” and Albertville “CenterStage!” to name a few. Little did I know, the man I would come to marry competed against me in many competitions across the southeast.

The love story begins a year after graduating high school. I was still a show choir junkie. I worked with local groups in Birmingham during my freshman year at the University of Alabama at Birmingham to get my fix during the off-season. During competition season, I made a point to go to every competition within driving distance. My friends and I liked to live-tweet our commentary of the competition in real time. I told you we were junkies.

During one competition, I got a new follower on Twitter who promptly “slid into my DMs,” as the kids say. It was a cute blonde guy from Enterprise named Seth who was attending community college working toward a music education degree. We had a common interest in music and specifically show choir, so I decided to entertain his message and gave him my number. It turns out he was a graduate of Enterprise High School and was involved in their mixed show choir “Encores.” Of course, that was a plus.

We became fast friends and began messaging every day. It wasn’t long before he moved to Auburn for school and we became inseparable. We liked to hang out at his apartment and play music. We would play a game where we put iTunes on shuffle and built our fantasy show choir sets around each song that came on. Fast forward another six months when Seth came back to Auburn early from Christmas break to ask me to be his boyfriend so no one else would ask me out while he was gone. We have been together ever since. We dated for 4 and a half years before we tied the knot in May of 2017.

Seth graduated from Auburn University with his music education degree and is now a 6th grade music teacher at Drake Middle School in Auburn, continuing to share his love for music with a new generation. His students share more open viewpoints about gender and sexuality. He explains, “They won’t really care like some of our generation and older people do. They ask each other for their preferred pronouns. They want to be inclusive.”

There are still a few things to fix within schools and even in the show choir community to make conditions a little better for LGBTQ+ students, but it gets better with time. It’s good to know that more than ever, students are embracing each other with open minds and hearts. Show choir is about having fun and learning to create something bigger than any one individual can do alone. Show choir is also about learning from each other’s differences and learning to make those differences work to the advantage of the group. As long as students are learning and loving, that’s all we can ask for.

About the Author
Aaron Spraggins is an alumnus of Opelika High School where he was involved with "Ovations" for 3 years. He is currently a screen printer by trade, a board member for Lee County’s first Pride organization, and owns his own LGBTQ+ apparel business, Queer & Co. Check out his designs at Queerandco.com.
Read more from this author
Share
Share this:
Digital
PDF
Issue
More in Show Choir Spotlight