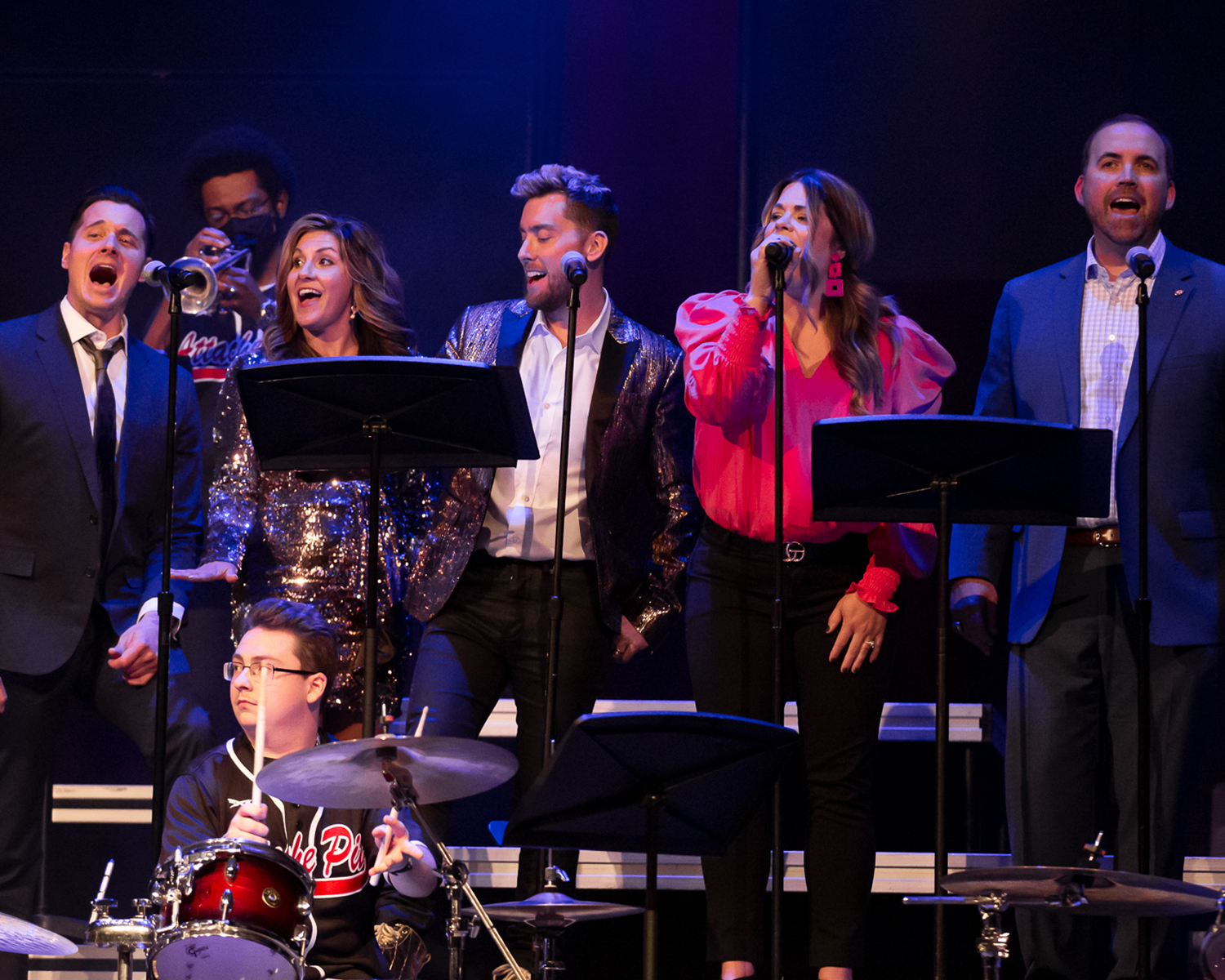 Share
Share this:
Digital
PDF
Issue
Lance Bass was just another first-year student at Clinton High School in 1994 when he auditioned for Attaché, the school’s award-winning show choir. Barely a year later, he was a member of the “boy band” vocal group NSYNC and well on his way to becoming a teen pop icon. It’s no coincidence that he spent the intervening time learning how to use his voice and perform under the direction of David and Mary Fehr in what has become known as a showbiz bootcamp and de facto finishing school.

Nashville singer-songwriter Shelly Fairchild—who has three solo albums to her credit, has appeared on records by Jason Aldean, Eric Church and Terri Clark, and has carved a successful niche by placing songs in television shows—had a similar experience after joining Attaché as a shy teenager. So did Broadway star Heath Calvert, known for his roles in Hair and Bloody Bloody Andrew Jackson.

All three former Clinton High School and Attaché students, with the addition of fellow alums Drew Wardlaw, Max Lyall, and Brittany Wagner—the breakout star of Netflix’s Last Chance U—appeared onstage at the Attaché Alumni Theater at Clinton High School in April. The four-act performance celebrated the forty-second anniversary of Attaché by bringing alums back to the stage, raising money to support the program, which has earned the Grand Champion title at eighty-five competitions since 1992. The group’s current run of twenty-three consecutive Grand Champion wins dates back to 2014, and their 2019 bid was captured in Attaché, a PBS and Reel South documentary film.

Bass, in his first Attaché appearance since NSYNC debuted in December 1995, served as host and emcee for the evening. Having learned to sing in church choir—and while receiving further guidance from Fehr through Attaché—Bass began vocal instruction with Bob Westbrook in Germantown, Tennessee. Westbrook had also coached Justin Timberlake, and introduced Bass and Timberlake when NSYNC was searching for a bass singer.

Although Bass’s time in Attaché was brief, it opened his eyes to his own talents and changed the course of his life. But much of the inspiration he felt came from watching his classmates. “I got to do West Side Story with Shelly Fairchild,” he says. “She was our Maria, and good Lord, we knew then she was going to do something. She was so talented. I was just a freshman then, and it was so new to me; I just couldn’t believe that high school students could be so talented.”

Fairchild did find success when she moved to Nashville and signed a record deal with Sony in 2004. The label released her debut album, Ride, the following year, sending Fairchild on a whirlwind of promotion including radio appearances and concert tours with country music stars Keith Urban, Tim McGraw, and Rascal Flatts. But her journey began when she arrived at Attaché around the same time as the Fehrs, who took over after founder Winona Costello retired.

“The first year that I was there, Mr. David Fehr was our new director,” Fairchild says. “I’ll never forget him coming up to us as we were learning some of the songs and yelling at me in my face, like, ‘Open your mouth, Fairchild!’”

“To this day,” she adds, “people will ask me, ‘How in the world do you sing from your toes all the way up through the top of your head?’ And I’m like, ‘Well, if you had David Fehr as a director, then you would understand why your whole body is involved in this.’ So, it really made a big difference in my life.”

Fairchild remembers when Fehr brought Heath Calvert, then a first-year student, to the group—an unheard-of move, since membership was usually open to students beginning with the sophomore year. He had just moved to Clinton, and while his mannerisms weren’t disrespectful, he didn’t say “sir” or “ma’am” like most of his new peers, Fehr says. His style was a hard sell with his teachers; he had racked up nine detentions for such minor infractions, and one more would suspend him from school and activities.

“I went ahead and gave him his tenth detention so that he could serve his one day or whatever. It was so that we wouldn’t miss the performances coming up,” Fehr laughs. In the April performance, alums performed solo, in pairs, and in groups throughout the three-hour program. Calvert performed “If I Only Had a Brain” from The Wizard of Oz and “Anthem” from the musical Chess, while the current Attaché students performed their 2022 competition showcase, “Vacation!” Bass and Wagner joined the chorus for a number of songs.

The third act, though, was all about the Fehrs. Fairchild debuted “What We Leave,” a song she wrote especially for the event, as a duet with her sister, Lindsey Fairchild Lenoir. The performance was a surprise to the Fehrs, organizers, and the audience, but the current students were in on the plan; Fairchild recruited the daughter of a friend to circulate the lyrics to them so they could join in on the song’s finale.

While Attaché provides the platform for students to explore their talents, they also learn life skills, Fehr stresses. Work ethic is crucial to the post-graduation success of the students who perform and those who run the show; perseverance is another. Fehr recalls a competition in California where Wagner performed while in pain from a broken finger she suffered during warm-ups, a show of grit and determination the public would later see on “Last Chance U.”

“We produce just good kids; the talent and desire come from good families,” Fehr claims. “Don’t credit that to Attaché. I can develop whatever is there and help them out, but those families and kids, they have goals and missions, and my job is to help them along. But the ninety percent that don’t go into the arts, they’re still getting the same thing.”

About the Author
Jim Beaugez is a Mississippi-based writer whose work has been published by Rolling Stone, Smithsonian, Oxford American, Garden & Gun, Guitar World and other publications. He also created and produced My Life in Five Riffs, a documentary series for Guitar Player that traces contemporary musicians back to their sources of inspiration.