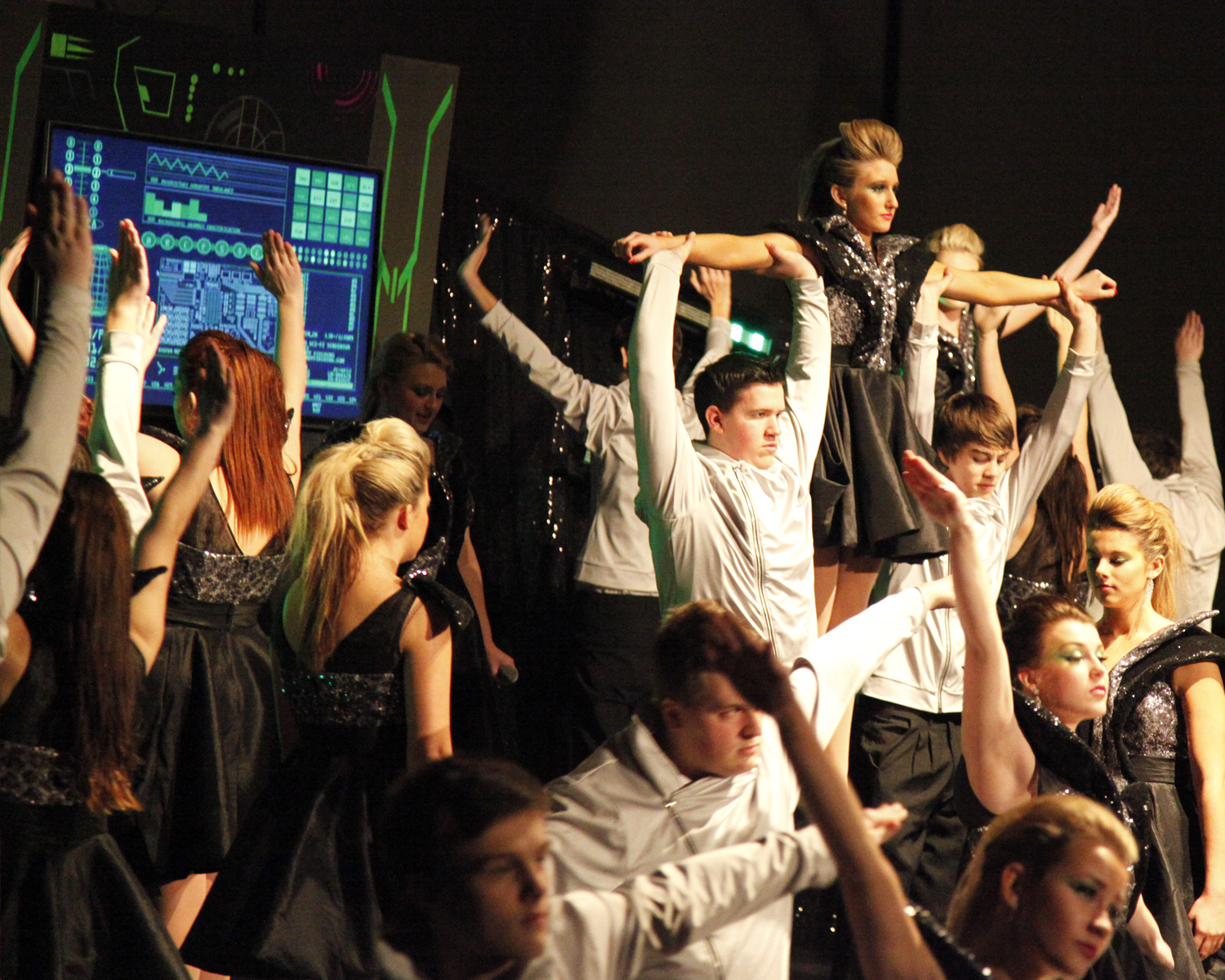 Director Joseph Kincaid, with a B.A. in Music Education and a Master’s in Educational Leadership, has undoubtedly produced an excellent show choir, but he has also created a show choir family by including his immediate family members as an integral part of his show choir team.

Additionally, Visual Volume hosted its 16th MusicFest show choir competition in 2014 in its brand-new gymnasium. In the last couple of years, due to an increase in the number of high schools and middle schools that signed up to participate, the festival was expanded to two days; typically, over one thousand singers, musicians, and dancers participate in the event.

One aspect of Kincaid’s background that makes him unique among some directors is his master’s degree in Administration. Though the arts and administrative duties are often at odds, he finds that he is just as drawn to the administrative side of his job as to the “creative outlet.” Of course, though it would be a shame in many respects if Kincaid were to leave the show choir for a permanent administrative position, having principals who would be more likely to support the arts and push that aspect in their schools could have unexpected benefits. He shares, “We need more administrations that support the arts.”

As one of his administrative talents, Kincaid is incredibly organized-what he calls “overly organized” in fact. Rather than having to depend on a parent or group of parents to stay on top of every event and fundraiser, he “organizes and oversees everything” that has to do with the choir. Though he recognizes that the fact he “loves to organize” makes some aspects of his job far easier, he also believes that someone who doesn’t have this innate set of tools can certainly find help within their parent support system.

Director Kincaid notes that one of the things that sets Poca apart is the size of their school, in that they are “one of the smallest groups in the state.” There are only about 500 kids in the school, and about 65 of those kids are in the choir. Despite the limitations of a small student body, the program has flourished for decades.

First, Kincaid is quick to credit his success in part to twenty years of a successful program, with “heavy-hitters” for directors like Kim Edwards, David Legg, and Gail Kennedy. He shares that he was lucky enough to student teach under Legg and Kennedy. Interestingly, when he was younger he was in another show choir at Winfield High School, so when he first heard he would be studying at this rival school, he thought, “Oh no!” Then, after he graduated and spent one year as a substitute, he returned to Poca when Kennedy retired. “It all just kind of worked out and fell into place,” he adds.

One might imagine-in a school of this size that can boast over 12 state championships-the show choir would be heralded, but-as is the case in many schools-the internal focus is still sports-related. However, he shares that “show choir has the community support.” Additionally, the show choir itself may be even more supportive of one another’s talents than would be typical of many other show choir programs. At Poca, about half of the kids alternate between singer/dancer and band member at some point in the show. He adds that the “best singers are often also the instrumentalists,” so he finds a way for them to share all of their talents in one amazing performance.

Just as importantly, he sees every crew member as a show choir member. Their motto is this: “If you’re in the band, you’re in the show choir.” He models this belief by posting a list of all show choir members, without breaking down their particular duties. This way, he reinforces the idea that each and every member is viewed as equal.

Another potential challenge to the program, aside from the size of the school, is that the middle school doesn’t even have a choir program, let alone a show choir program. Kincaid prefers, though, to focus on the upside. Though he admits it would be “nice if they had some training,” he also doesn’t have to “break old habits.” In this way, he adds, “It’s a challenge and a blessing.”

Ultimately, he believes the success of the program is due to “talented kids and community expectations.” Because the leadership of the program has been strong and consistent, with each previous director “passing the torch” to someone he or she respected and trusted, the program-as well as the training behind the successful program-has been going strong for decades.

Cheyenne McNeil, a senior, praises Kincaid for his talent and dedication above all; in fact, she says, “He’s so dedicated, it’s crazy.” She also admires his ability to “tell us how it is,” being blunt about what needs improvement and how to reach the level they are all aiming to hit. Sierra Jones, the head of Stage Crew, believes Kincaid has undoubtedly built “one giant family.” She adds, “He likes to act likes he’s the big, tough guy, but he really cares about us.”

Sophomore Chase Bailey agrees that Kincaid is “very inspiring” when it comes to encouraging his students to do their best. Bailey also adds that it was tough at first to go into this world of show choir, rather than sticking to sports in a sports-dominated culture. With choreography, in particular, he adds that it was “very awkward the first time around.” However, he’s glad he stayed because his mother finds it very special to watch him perform. He adds, “It’s not throwing a football-it’s doing what I love.”

Kincaid is quick to explain that his family is another reason the program has been successful. Kincaid’s father is in charge of the stage; the show choir family calls him “Daddy Kincaid.” His mother has not only helped make costumes, but she is an excellent advisor on makeup, hair, and accessories, in addition to being the emergency backstage supporter when a zipper breaks. Kincaid notes of his family that they are “diehard fans.” However, Kincaid also views them as an integral part of his team, and he “runs everything by them.”

Though his mother has played piano for years, his family had no other background in music until Kincaid was in show choir himself. From that point on, they loved everything about show choir. It’s not just his parents’ support he counts on either. His older sister Maggie, an attorney, emcees every show. His brother, John William, designs the programs, and his younger sister Kim-who is deaf-is a tireless supporter who brings her “lucky cat” to celebrate the performances.

Janie Kincaid, his mother, shares, “Joey’s piano teacher was the show choir director. His freshman year he wouldn’t do it.” She explains that after they twisted his arm a bit, he finally gave it a try; she notes, “Once he got into it, he loved it.” She also adds, proudly, that by his senior year he was helping to put the show together.

John and Janie Kincaid share that there are two moments from their son’s career which demonstrate a great deal about his approach to show choir. First, even after a competition where his group earns the highest awards, he is likely to share five or six things the following week that they could work on because “no matter where you are, it’s about striving to get a little better.” Secondly, they recall a time when a Poca newspaper came to do a story on Kincaid, and he immediately answered that the story wasn’t about him-but about the kids.

For the Kincaids, they just feel lucky to live near one another and have the chance to spend this time together as a family. They add that this same family dynamic-whether it originates from the close-knit Kincaid family to their much larger show choir family-is one reason so many alumni and parents come back year after year to help with the shows or festivals. Students who graduate also return to help. Ultimately, even though the entire family rallies around both Kincaid and the entire show choir, John notes, “For some reason, we don’t consider that to be exceptional.”